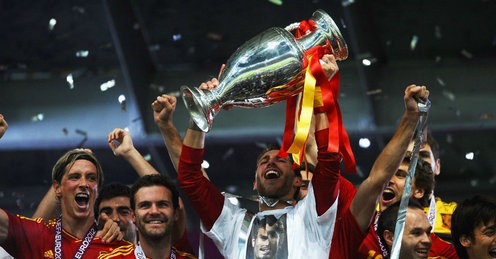 Spain confirmed their place amongst football’s greatest all-time teams on Sunday night with an emphatic 4-0 win over Italy in the Euro 2012 final. The triumph means La Roja are the first team to ever retain the European Championships crown, and the first to win three international tournaments consecutively.

Vicente del Bosque reverted back to the team that had drawn 1-1 with Italy in the group stages, with Cesc Fabregas reinstated in his first-team at the expense of Alvaro Negredo. Cesare Prandelli made one change from the team that had dispatched Germany in the semi-finals, with Ignazio Abate restored at right-back in place of Federico Balzaretti.

Ahead of the game a close encounter was predicted due to the Azzurri’s exceptional performance in their last game, but in truth the match was a one-sided affair from the first whistle. The Spaniards, eager to prove their critics and doubters wrong, came out of the blocks with purpose and energy, and their possession game was evident from the off. 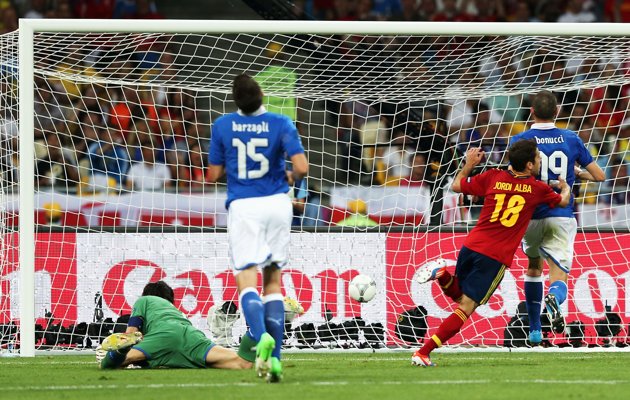 It only took the world champions 12 minutes to drive home their dominance, with David Silva rounding off a wonderful team goal early in the match. After probing for an opening in the Azzurri final third, a masterful through-ball found Cesc Fabregas on the right of the Italians’ penalty box, who outstripped Giorgio Chiellini to centre the ball, with the onrushing Silva able to head the holders into the lead.

It was a double blow for Prandelli’s men soon after, as Chiellini limped off, replaced by Balzaretti at left-back. Despite this Italy tried to get back into the game, with Daniele De Rossi looking to break up the incessant Spanish close-knit passing in the centre of the park. The Azzurri’s main threat looked like forward Mario Balotelli, but the temperamental frontman was limited to efforts from range that did not trouble Spanish captain Iker Casillas.

With half-time approaching Spain delivered a hammer blow to their opponents, with Jordi Alba doubling their advantage on 41 minutes. With Spain keeping the ball in their own half, Del Bosque’s men made inroads down their left flank, with the ball falling to midfield dynamo Xavi. A delightful and perfectly waited through-ball to the newly-signed Barcelona man saw the defender one-on-one with Gianluigi Buffon, with Alba opening up his body and sliding the ball past the Azzurri goalkeeper.

Prandelli looked to switch things up after the break with Antonio Di Natale coming on for Antonio Cassano at half-time. Any glimmer of hope that the Azzurri had of getting back into the match faded when the substitute spurned two good chances early in the second 45, the best a shot saved by Casillas after Riccardo Montolivo’s clever reverse pass.

As Italy looked to get back in the match Montolivo, who struggled to get into the game due to Spain’s dominance, was replaced by Thiago Motta on the hour mark. However, in a cruel piece of luck for Prandelli and the Italians, Motta pulled up with a hamstring strain shortly after, reducing the side to ten men as all three substitutions had already been made.

Spain looked happy to play out time and at no point during the final half-hour did they seem under any pressure. Passing triangles continued, with the Italians looking out on their feet and chasing shadows. Del Bosque showed the dearth of talent in his contingent by swapping Fabregas, Iniesta and Silva for Fernando Torres, Juan Mata and Pedro, and two of the substitutes but a gloss on the dominant Spanish win.

Firstly, after the Italians gave the ball away in their own half, Torres was played through on goal by the impressive Xavi and the Chelsea man converted past Buffon. Finally, El Nino found himself through on goal once more four minutes later, but unselfishly played the ball inside to his Chelsea team-mate Mata, who scored the fourth despite only being on the pitch for the final stages.

All-in-all Spain were worthy winners, with the game ended as a contest in the first-half. The world champions have been labelled boring by certain press members, but their showing in the final was anything but. Scintillating skill and intricate passing was a joy to watch, as the highly-respected Italian midfield was neutralised by their inability to get close to the ball. Any doubts over La Roja’s ability to convert were put to bed also, as all four goals were taken well in a complete and ruthless performance.

In fairness to Italy, any team in the world would have ended up on the losing side against that Spanish performance. The likes of Iniesta, Xavi and Fabregas looked right on their game from the first whistle, and any hopes of stifling Azzurri tactics prohibiting these talented superstars faded quickly. Cesare Prandelli should be applauded for getting Italy to the final, in what the Azzurri fans should look at as a positive step in the side’s evolution.

Looking back over the tournament, Spain have only conceded one goal and really have not been put under any concerted periods of pressure or looked vulnerable at any time. Gerard Pique and Sergio Ramos in the Spanish rearguard have been dominant when called up but have largely been able to remain in cruise mode due to the security in front of them and the minority of possession that Spain’s opponents get.

Ahead of that the midfield six of Iniesta, Xavi, Silva, Fabregas, Xabi Alonso and Sergio Busquets have been nothing short of masterful. The deployment of Fabregas in the false nine role has not been without its critics, but one must remember that the side were robbed of their main forward David Villa ahead of the tournament. Del Bosque has used his squad as he has seen fit, with Negredo and Torres also starting when called upon.

Journalists and fans alike will run out of superlatives when evaluating this Spanish side and their complete dominance over world football during the last four years. They are deserved winners of Euro 2012 and will continue in the role of team to beat in the lead-up to the 2014 World Cup. The sheer quality of their individuals shines through, but in the end the exceptional way they play together as a team with and without the ball has led them to yet another glorious campaign.

This side will now go down in history as the first to win three consecutive tournaments, and will be compared to the great Brazil, Argentina and Netherlands sides of yester-year. With the quality at Vicente del Bosque’s disposal and the majority of the starting team still in their prime, dethroning the world’s best team will take quite the effort, as has been suitably proved this summer.