The Russia National Team, led by Dick Advocaat, will be expected to emulate their Euro performances of four years ago when they progressed to the semi-finals. Despite missing out on World Cup qualification, Russia will know that they have the squad and the opportunities to reach the knockout stages of Euro 2012.

Russia are paired with hosts Poland, 2004 surprise winners Greece and Czech Republic in Group A. Their opening game is on Friday 8 June against the Czech Republic.

Below you’ll the new home and away football shirts worn by the Russian national team for Euro 2012. Russia are sponsored by adidas, who are also the official UEFA sponsors for the tournament.

The Russia home shirt is red with the usual adidas shoulder strips and logo on the chest in light gold. The national flag colours form a sash across the front of the home jersey going from right shoulder to left hip.

This is the same Russia home shirt that will also be worn for World Cup qualification after the Euros. 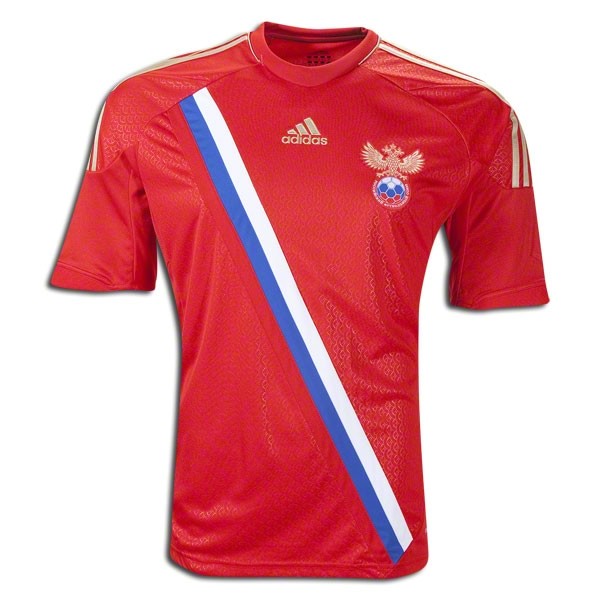 The Russia away shirt is white with the collar, the adidas stripes and logo in red. The away jersey also includes the Russian flag colours in the same configuration as the home shirt.

This is the same Russia away shirt that will also be worn for World Cup qualification after the Euros.

Click here to buy the new Russia away jersey. 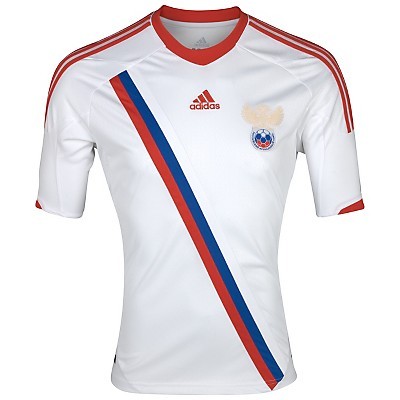