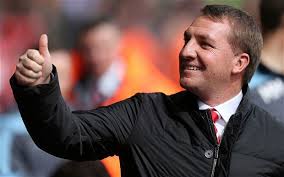 A few days after being shown the door by Liverpool, Brendan Rodgers is seemingly a wanted man as the former Liverpool boss is linked with several managerial roles.

However, the Rodgers most recent link could be his biggest opportunity yet.

Reports coming out of England are that Rodgers is being considered as a replacement for Three Lions manager Roy Hodgson, if the Englishman was to leave the job.

Hodgson who has been in the role of English manager for three years will undergo a performance assessment at the conclusion of the European Championships in France next year.

If England was to do poorly in the competition the FA would consider not renewing the former Liverpool bosses contract as England boss.

The list of potential managers to replace Hodgson is being lead by Rodgers, Moyes and Roberto Martinez as FA chairman Greg Dyke hopes for a manager that is familiar with the Premier League.

Rodgers is currently holidaying in Spain since being dismissed from Liverpool over the weekend and hasn’t made a statement on his future.

Although the Northern Irishman has been linked as a potential replacement for Newcastle boss Steve McClaren as he struggles at the bottom of the Premier League table.

If he was to get the role as England manager, his policies in bringing through youth players could see England’s national side be invigorated and challenge further in international competitions after disappointing results in past World Cup’s and European Championships.

Despite the 42-year-old having a disappointing end to his time at Liverpool, it may not be too long before Brendan Rodgers is back into a managerial role.