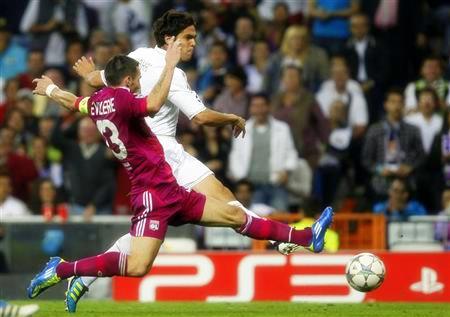 Real Madrid kept up their 100% record in the champions league this season with an impressive 4-0 victory over Lyon. The hosts took the lead on the 18th minute mark when Mesut Ozil’s dangerous corner found Karim Benzema at the back post for an easy tap-in. The hosts looked in control from the outset and after a series of one-twos between Ronaldo and Marcelo the Brazilian flashed a right-footed effort just wide of Lloris’ goal.

Lyon however hit back with a goal of their own, but Gomis’ smart finish was adjudged to have been offside. Mesut Ozil’s shot come cross then deceived the Lyon defence however Lloris reacted just in time push the ball wide of his left hand post. Nevertheless Madrid were not to be denied a second after a slip from Lyon centre back Bakary Kone, Benzema turned provider squaring to Sami Khedira who gratefully obliged sending Lloris the wrong way.

The keeper’s night then went from bad to worse as Lyon failed to clear the ball fell to Ozil who’s cross intended for Benzema was intercepted by the Lyon stopper only to see it deflect off his arm and into his own net. Kaka almost provided the fourth after a neat give and go between himself and Ronaldo the Brazilian drifted into the Lyon penalty area but fired his shot agonisingly wide. The Bernabeu crowd anticipated a fourth after some delightful passing between Ronaldo, Benzema and Marcelo, the Portuguese talisman curled a shot past Lloris, however the goal was chopped off after Kaka who was in an offside position made slight contact with the ball.

Nevertheless the fourth did eventually arrive as Kaka’s corner fell kindly to Sergio Ramos who at the second attempt rifled a left footed shot past Lloris to compound the French side’s misery. And it was almost five when another mover between Higuin and Kaka left the Brazilian bearing down on goal, but Lloris just did enough to knock the ball against the Brazilian and out of play.

The win leaves Real top of their group on nine points, five ahead of Ajax and Lyon with qualification for the knock out rounds proving inevitable. They along with Marseille (who host Arsenal tonight) remain the only two teams with and immaculate record in this season’s Champions League to date with neither team conceding and both with maximum points so far. Madrid who fell at the semi final hurdle to the eventual winners Barcelona, they will be hoping to go one better and win their first Champions League since 2002, and with the way they are going about their business, who would bet against them?

The author of this article, Che Julienne-Chamers, is a student of Sports Journalism at the University of West of Scotland and a massive football fan.