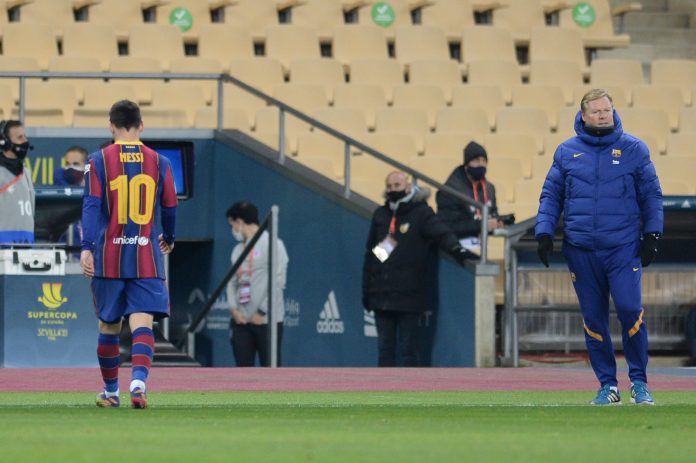 Athletic Bilbao’s Asier Villalibre was the victim of Lionel Messi’s violent conduct in the Spanish Super Cup Final, which saw the latter get a direct red card.

Barcelona were unable to claim the trophy after falling to a 3-2 defeat against Athletic. Lionel Messi saw his first-ever red card in the club’s colours.

There are likely to be severe ramifications for his violent conduct. The 33-year-old risks being suspended for four to twelve matches, including cup and league fixtures.

In truth, a player with as much experience as him should not behave this way. The fact that Barca were on the attack in spite of being a goal down makes this act even more disappointing. Messi himself knows how dependent Barcelona are on him, so with a lengthy ban looking like a genuine possibility, his dismissal could not have come at a worse time.

Ronald Koeman’s men are set to compete in the Copa del Rey this month and look to continue climbing the La Liga table.

Given that the remaining part of the season could make or break the club’s fortunes, Messi should have been the last player to have risked facing a lengthy suspension, more so with the injuries that Barcelona are facing.

Ansu Fati and Philippe Coutinho are both expected to be out for at least another month, which means Barca’s squad has been trimmed by another crucial man in the business end of the campaign.

That said, one man’s misfortune can be another man’s opportunity. Messi’s suspension will open the door to Antoine Griezmann to play a starring role.

Griezmann thrives when played in a free-roaming role in the final third. So far in his Barca career, he has been unable to grab the spotlight.

The next few matches though could help him in doing that, especially with the purple patch he is enjoying. Unfortunately, he is likely to play with the club’s outcasts besides him such as Martin Braithwaite and Ousmane Dembele.

How do you think Barcelona will fare in the absence of their irreplaceable talisman?