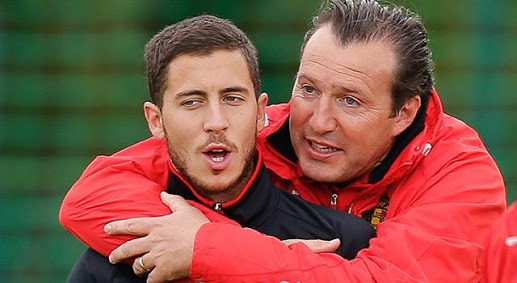 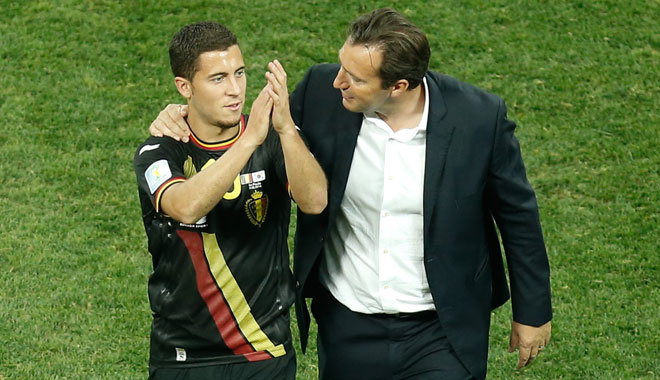 Eden Hazard’s international manager Marc Wilmots believes the winger will be in much better condition to perform for Belgium if he joins Real Madrid. According to this report by the Telegraph, Wilmots believes that Hazard will burnout if he follows the style-of-play Mourinho is asking him to.

The Chelsea boss is demanding more and more from the 24 year-old, and wants him to contribute to the defensive side of the Blues’ game as well. After being adjudged Player of the Year last season, Hazard has looked jaded and tired this time around for both club and country. Even though there hasn’t been any private statement, private sources for the Telegraph have said Wilmots believes that this loss of form has a lot to do with the fact that Mourinho is making him do far too much.

Hazard was dropped in the weekend’s Premier League game against Aston Villa but started at Dynamo Kiev in the Champions League on Tuesday. There was a marked improvement in his performance as he looked lively throughout the first half and also hit the post. His goal drought for his club though, continued. It is now 16 games since he last found the back of the net in any competition for Chelsea.

Real Madrid show interest in any top player in the world, and Madrid B coach and club legend Zinedine Zidane is an open admirer of Hazard. There hasn’t been any formal bid or advance yet but one feels it is only a matter of time before it comes.

Hazard seems to be happy at Chelsea for the moment, but his international manager believes that he will thrive if given more freedom to attack. Mourinho’s emphasis on solidarity and organisation demands every player in the side to contribute to both sides of the game. Wilmots has stated that if relieved of his defensive duties and given a lighter schedule than the one he follows in England, Hazard will be able to make the step up.

The player only signed a five-and-a-half year extension at Stamford Bridge in February this year and it will therefore take a lot of money to prise him away from the Premier League champions. Of course, it’s not like money has ever come in the way of Real Madrid going out and getting whoever they want.