With a little help from Liverpool, Manchester United are on their way to win the coveted 19th Premier League title (oh, the irony!). Liverpool, however, will have all the time in the world next season to catch up to United because as things stand, they’re out of Europe… completely.

The 19th title will also be a little sigh of relief for the Glazers as it might take some of the spotlight off them and their accounts. Also, this will be a tremendous start to a new era with a new sponsor.

The new Manchester United 2010-2011 home kit is inspired by a long history and a long tradition of being England’s best. The design is based on a classic 70’s kit, emphasizing history and commitment to the Manchester United crest. The shade of red is the exact shade of red that has been decorating the United crest since it’s design, while recent kits have deviated from the powerful red and opted for a more toned down shade to give variation. The “believe” slogan, pictured above, sits right under the crest, which sits directly over the heart while the players are playing matches.

The 10/11 United away kit is designed in a very similar fashion, with the “Believe” placed under the crest, and sending the same message. The shirt is mostly white, which makes the logo look very interesting and stand out with a white background. The arms have a zig-zagged design, and are decorated by red, white, and black, to add another dynamic to the shirt. The Aon logo in black looks great on white, but I wonder how it would be in the United Red on the front of the shirt. Perhaps it would alienate the black on the sleeves, but the shirt needs more red, and perhaps more gold. 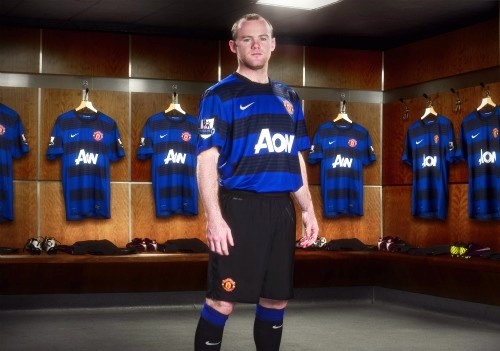 The new football shirts for the 10/11 season are very different from each other, but the new home kit is one of the best in recent history. Here’s an image putting the last four united shirts next to the new home shirt. You can see the colour difference very well, as well as the differences in design. While some of the old kits have been very popular, this one looks the most traditional, and quite more simple than kits of the recent past. Perhaps this is a good change. What do you think?

The new season also brings a lot of interesting training gear, which the club is also launching a new set of every season these days. Nike spends a lot of money to innovate in terms of technology every season, but also has to maintain a high level of design and to make it unique in the process. Sometimes I think footballers are too spoiled, or that we are too spoiled as consumers. This season you can buy United balls, jackets, hoods, shirts, kits, t-shirts, training tops, goalkeeper gloves, and even underwear. All of them re-designed to fit all of our consumer needs. Finding the best ones out of the bunch is not always easy, but we tried to narrow it down for you and display the best of the best in this season’s new Manchester United gear.

The black gear gives a nice little break from all the red from past seasons, and it does look very comfortable to wear in cold weather. In the preview it’s modeled by Valencia, and you’re likely to see it in the winter season in training and before matches. It’s called the Manchester United basic rain jacket and it’s useful in the fall and winter in Manchester. It’s my favorite new training piece from Nike for the new season. It’s also cheaper than a new kit, so you have to keep that in mind as well.

The best training top is the Nike one pictured above and modeled by Vidic. As we know that Vidic will be staying with United, we can be happy to see him modeling this piece of merch. It’s made with the Nike dri-fit technology and looks great in that shade of yellow. The only part that is not so nice is the dark gray around the crest, but it fits to the grey on the shirt mostly, so that’s why they used it. This is what we’ve seen the players wearing during pre-season training while traveling. It’s called the cut and sew training top, and it’s extremely light-weight and easy to train in.

Those are the best of the best in this season’s training and match gear, they look fantastic and those are worth buying. Buying them all would mean you’re about 200 pounds under, so maybe it’s wise to select your favorite from the bunch.

This ends the merch search for this season, what do you think about all of it?

If you like reading about new football merchandise, you can check out the Soccer Gear Facebook page, where we keep you updated with all new kits, boots, and other cool football merch. Also see the all new sportslens.com/Store to purchase your favorite kits, boots and other football gear.