Manchester City really hurt their chances of progressing to the second round a fortnight ago when they let slip of a 2-0 lead to draw 2-2 in Moscow.

These two sides played in front of an empty stadium over in the Russian capital due to fans being banned. To make sure the stadium isn’t empty on Wednesday, City are selling buy one get one free tickets for this game.

Both sides are looking for their first win in this season’s competition but it is the home side who are the clear favourites.

David Silva will be out until after the international break. The Spaniard was missed a little in the weekend’s derby victory over Manchester United.

Defenders Aleksandar Kolarov and Eliaquim Mangala both missed the weekend’s victory too but should be fit to play on Wednesday if called upon.

Pontus Wernbloom and Alan Dzagoev are both back from suspension for this game after missing the first three group games.

Rasmus Elm and Kirill Panchenko are both sidelined. 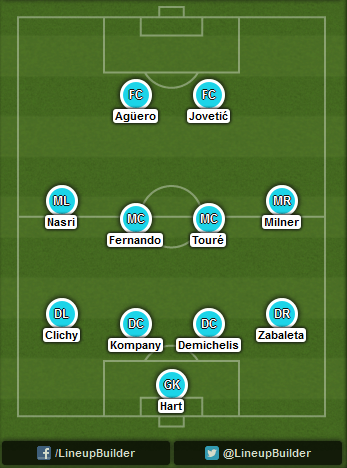 Manchester City will be taking the game to CSKA Moscow. Victory is the minimum ask from Manuel Pellegrini if they’re to reach the second round. It’s been all about Sergio Agüero of late but other players may need to step up. Yaya Touré should have a bit of freedom to support the strikers as he did in the second half versus Manchester United with success. 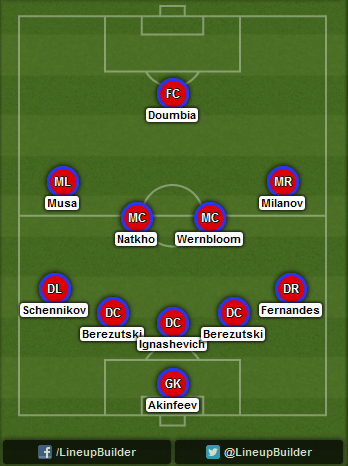 Expect CSKA Moscow to play five defenders again and try to hit the English side on the counter attack. Ahmed Musa’s pace is a good option for that, but as a left winger rather than a striker. Seydou Doumbia seems better at holding the ball up and winning free kicks. Alan Dzagoev could of course play on the left wing and Musa up front.

Sergio Agüero vs Sergei Ignashevich
Manchester City created a fair few chances in the first half in their draw in Moscow when they led 2-0 at half-time. Sergio Agüero scored the opening goal and was their biggest threat at the weekend too. No one else looked so threatening against Manchester United than the Argentine so look out for Agüero to be the focus on Wednesday too. CSKA Moscow centre-back Sergei Ignashevich is 35 now and the defence have shipped eight goals in their first three games.

James Milner vs Georgi Shchennikov
Manchester City’s English midfielder scored in the first fixture between these two and had a good game at the weekend down the left wing. We’re expecting James Milner to move back to the right wing for this one after a successful game versus Georgi Shchennikov last time they faced off. The Russian left-back struggled in the weekend’s 1-0 home loss to Zenit St. Petersburg also. Milner playing on the right means that Samir Nasri would start on the left and Jesús Navas benched. The Spaniard’s pace was a threat in the Premier League at the weekend but his final ball was poor.

Seydou Doumbia vs Martín Demichelis
The CSKA Moscow striker made a massive impact as a half-time substitute in the first meeting by scoring the first goal and winning the penalty that led to the equaliser. Seydou Doumbia has surely earned his starting place for this game. Ahmed Musa has been playing up front of late though but the Nigerian can also be switched to the flank and be a pacey threat there as he was for his country in the World Cup this past summer.

Prediction: Manchester City 2-0 CSKA Moscow
Manchester City need a win and they’re good enough to beat the Russian opposition. The English side let slip of a 2-0 lead in Moscow after taking their foot off the pedal. Don’t expect that to happen when they meet at the Etihad but do expect the defending Premier League champions to record their first Champions League win of the season.