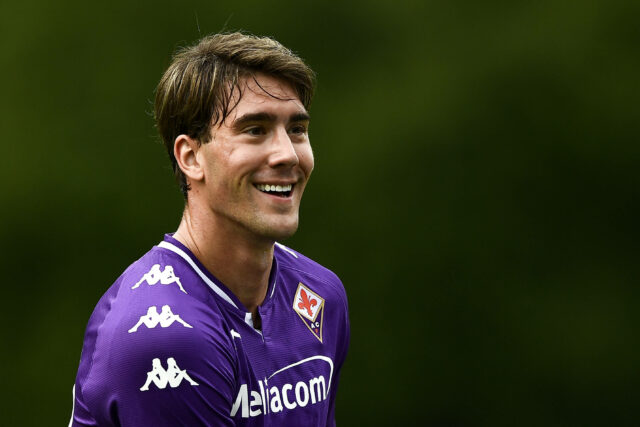 Always on the lookout for a new striker since Sergio Aguero’s departure to Barcelona, Manchester City are reportedly eager to sign Dusan Vlahovic.

The young striker has made quite an impressive start to the current season with Fiorentina in Italy where he has been banging in goals on a regular basis.

While he already stood out last season after scoring 21 goals in 37 Serie A appearances, the Serbian striker is now tied with Ciro Immobile as the league’s top scorer this season, with 13 goals in only 16 appearances.

Such performances have naturally caught the eye of several European teams since last summer. This is especially the case today since the 22-year-old is not going to extend his contract with La Viola which runs until 2023.

While Juventus, Tottenham, Arsenal and even PSG have been monitoring the player’s situation, it appears that Manchester City are also in the race and might even be in pole position to sign him.

Still looking for a recognized striker, Pep Guardiola was very close to signing Harry Kane last summer. However, the England international eventually decided to stay put with Tottenham not too eager to sell him to a direct competitor.

Therefore, City are now seeing Vlhaovic as a great alternative. It is being claimed that Fiorentina would want a minimum of 55 million euros to sell their star player with club owner Rocco Commisso admitting that despite Fiorentina’s multiple offers, Vlahovic has not accepted any proposal.

The English champions are likely to lose either Raheem Sterling or Ferran Torres in the coming months so they will have enough budget to make a push for Vlahovic who could be their long-term replacement for Aguero.