Liverpool has completed the signing of highly rated Benfica forward, Lazar Markovic, for a reported fee of €25m (of which Benfica will receive €12.5m, since they own 50% of the player’s economic rights) the club has confirmed via their official website. Benfica too have made it official that the deal has been completed. 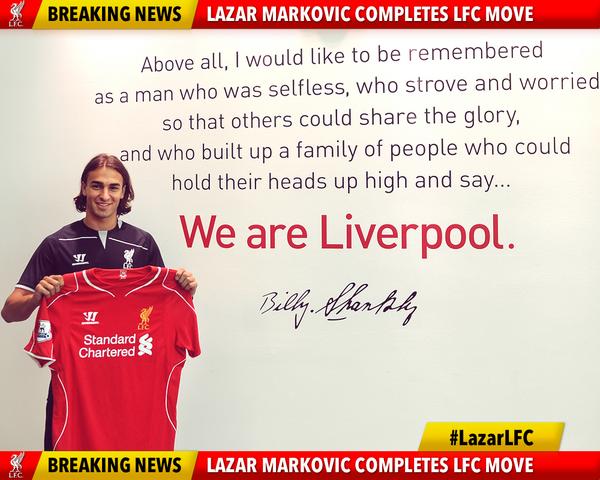 The 20-year-old will become the fourth major signing of the season for the Reds, following the arrivals of Rickie Lambert, Emre Can and Adam Lallana.

Markovic has signed a long term contract (thought to be a five-year-deal) and will wear the no 50 shirt for Liverpool. The Serbian flew to Merseyside last weekend and completed his medical yesterday. He becomes the second Serbian (Milan Jovanic joined under Roy Hodgson) to play for Liverpool.

Liverpool have announced last week that they had agreed to sell Luis Suarez to Barcelona. Although the Merseyside giants haven’t disclosed the fee, several sources claim that it is around £75m.

Reds manager Brendan Rodgers wasted no time in bringing in top replacements and Liverpool fans can expect few more signings before the transfer window slam shut. If the reports are to be believed, Liverpool are closing in on Belgium striker Divock Origi while are in the hunt of another top striker as well.

Markovic has been a long term target of Chelsea and at point it seemed his move to West London was just a matter of formality. However, over the past one year, Liverpool been monitored him closely, with chief scout Barry Hunter thought to be hugely impressed with him, in each of his scouting trips.

It is indeed a fantastic signing by Liverpool. Markovic is fast, skilful, intelligent, possess technical brilliance, superb awareness and understanding of the game, can pick passes – he could prove to be a huge signing for the Reds in coming months.

Markovic told Liverpoolfc.com: “I am very happy that I have joined such a great club.

Liverpool manager Brendan Rodgers added: “This is an exciting signing for us and one that improves our squad, in terms of attacking options, for the coming season.