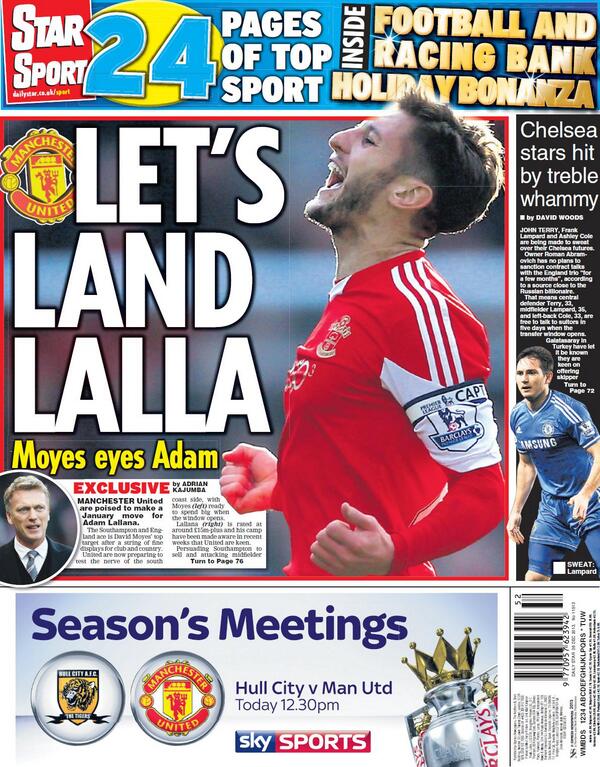 It’s not the first time someone has put these two ends of an equation toghether to make a match, but last night’s England international friendly against Denmark saw Adam Lallana again underscore the talent he has and why he would be such a perfect fit for David Moyes’ new Manchester United revolution.

In a game that could be described as insipid at best, the introduction of the Southampton midfielder injected some life and drive into the England set up, and it was no surprise that it took a sublime piece of skill and an exquisite cross from Lallana to set up the goal for Liverpool’s Daniel Sturridge. It wasn’t only the goal however that made the Saints’ man’s contribution so noticeable. The all round performance and energy e displayed reinvigourated a tired looking team. The impetus he gave is reflective of what he has done for his club side this season, and prompts the question as to whether this is the ideal player for the Old Trafford club.

The fact that Lallana’s visible presence off the field displays such a level-headed approach to his career is another reason as to why he seems an ideal acquisition. Back in December when talk of a move to United was in the air, he was quick to dismiss any speculation, saying he was happy at Southampton, and still had much to learn. He said that “I learnt my trade in League One and the Championship and feel I have grown with the club. I am delighted and as happy as I have ever been here playing for Southampton with one of the best managers in the league.” That sort of attitude must have been music to his manager’s ears, but also displayed a maturity of approach not often seen amongst many young players. The end of the season may bring a different story however, and could be the time for United to make a move.

The midfield still remains a problem for Manchester United, and the sort of displays that Lallana turned out last evening – and has consistently throughout the season for his club – illustrates that he could be the answer. For the man who is happy at the Saints, prising him away may be difficult, but this guy could surely be worth the effort.