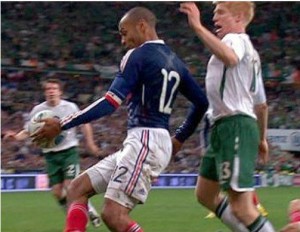 Thierry Henry and France will play their first match since the infamous handball as they host Spain on Wednesday in Paris.

Spain remain one of the favorites after their UEFA 2008 Euro win while France were the runner-ups in the 2006 World Cup. The Spaniards have been one or two in the World Rankings for the past year and breezed through qualification with a perfect 10-0-0 record. They conceded only five goals in 10 matches.

France were second in UEFA Group 7 and advanced in a play-off over the Republic of Ireland. The second leg included a controversial handball by Thierry Henry which led to the goal that put France into the World Cup Finals. Even though they barely qualified, France have stars such as Henry, Franck Ribery, Nicolas Anelka, and Patrice Evra. Spain are led by Fernando Torres, David Villa, Xavi, Xabi Alonso, Cesc Fabregas, and Iker Casillas.

It is a friendly match so both managers are not necessarily going to use the starting line-ups they will in South Africa and will probably make several substitutions at halftime. While Spain has been very successful in recent years, they did show some vulnerabilities in the 2009 Confederations Cup semifinals against the USA. Either team could win the match and any outcome wouldn’t be a shock.

France have the advantage of playing at home but Spain have a deadly attack with Villa and Torres. Whatever happens in the match it won’t be a good indicator of how they will perform in June at South Africa.

You can watch France v Spain live online as well as dozens of other International and World Cup games. Read our live World Cup page for more details.