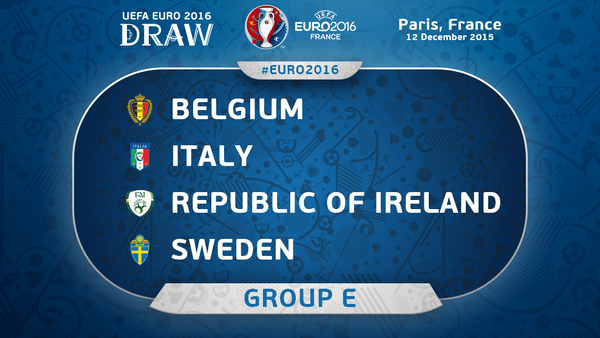 Three giants and a miracle-seeker form one of the most entertaining groups (Group E) of this competition. If you are not following any of these four teams, prepare for a very entertaining showdown.

Belgium is ranked as the second best team in the world right now. Some may say this is stretching it and some may believe this to be accurate, (mostly Belgians, to be honest). Don‘t get me wrong, I love the Red Devils, but the boys have not shown enough to be ranked this high. They did not place well in Brazil 2014 and the last time they played in a European Championship, everybody answered the phone yelling: “Wassuuuuuup” and that was considered cool. It wasn’t. But Belgium is living a magnificent period and they have a team that is amazingly skilled with talent pouring everywhere. The team is impressively young as well, without including the 37-year-old goalkeeper, Jean-François Gillet, 20 out of 23 players are younger than 30. There is a process behind Belgium’s development and it is supposed to continue growing for the next 8 years. Belgium got the job done in the qualifying round, achieving first place and losing only once, against Wales. They also scored 24 times and conceded 5 times. Granted, the rivals were not very strong and those who were, gave the Belgians a rough time, but they still stood their ground.

Italy is always invited to the party and their participation is usually as predictable as a coin toss. They can excel and reach the final, smashing England and Germany, or they can suck the life out of you like in the last two world cups. There is no denying they are a strong side and if an opponent underestimates them, they are making their last mistake. The Italians swept their rivals off their feet during the qualifiers and did not lose one single match, even though they drew thrice. This would be a bit more impressive if a clear strategy was shown, but their attack was not as impressive as it could and their defence was surprisingly shaky. I mean, they are Italians! We expect them to be unbreakable! They were not, but they successfully grasped the first place and now it all comes down to how well they handle their two first matches, against Belgium and Sweden respectively. They will not get through them unscarred, but if they are still standing after those two, Italy is a candidate to lift the trophy on July 10th in Saint-Denis.

Sweden and Ibrahimović. Ibrahimović and Sweden. There cannot be one without the other. This has been gospel for a while, but the out worldly striker is growing older each day and this might be his last chance to give his precious Sweden an international trophy. Sweden came third in their group during the qualifiers and had to beat Denmark in the playoffs in a heart-stopping match that was decided by none other than Manchester United’s new striker, Zlatan. The Swedish National team has not been a feared rival in a while, something close to thirty years. Their best weapons are beginning to show their age and the newcomers are only starting to reach the milestones necessary to be considered dangerous. Sweden is living a period of transition that will probably result in an obscure future once more, but this is the last opportunity they have to show the world that the process, and Zlatan’s international career, was not in vain.

Ireland is, in theory, definitely the weakest team in Group E, but they are not lambs awaiting the lions. They have claws and they showed it by tying their first match against Germany in Gelsenkirchen and then beating the World Champions in Dublin. They were also the team that conceded less in that group and stood their ground against the attacking giants, Poland, tying the first fixture and losing the latter one and allowing them to score against them only thrice. The Irish team needs to concentrate and play every match as a final; I, personally, will be rooting for them to get out of the group. I mean, even winning one game would be wonderful since they have not done that in a European Championship since they beat England in Germany 1988. Ireland begins against their simplest rival, Sweden, on June 13th in Saint-Denis.

It is difficult for a young man to have to carry so much responsibility, but De Bruyne is used to it. He had a decent first season with the blue side of Manchester, scoring 16 times and assisted 9 times during his Premier League appearances. He is capable of taking Belgium to the levels they set out to reach for this tournament. He is not alone, the likes of Hazard, Carrasco, Lukaku and Batshuayi will be there to make sure The Red Devils go as far as they can this time. It does not hurt them to have one of the best goalkeepers in the world too.

The boy is making such strong waves, that the public is comparing him to their historic idol, Diego Armando Maradona. Lorenzo Insigne is the perfect machine, he has everything you need to be a proficient midfielder and striker. The man is just that good. Italy needed a player like this now that Del Piero and Totti are part of history and not their current squad. Can Insigne make a team out of Italy and lead them to their fourth European title? If anybody can, it is Lorenzo.

Well, duh. I mean, the guy is the quintessential rock star of this beautiful sport. He is the Axl Rose of football. And, just like Axl, he puts his money where his mouth is. Zlatan is an amazing, resourceful striker who has scored for his National team on 62 occasions. He has played for a handful of major clubs and is experienced like nobody. The man does not only put the ball in, he scores beautiful masterpieces that were thought to be impossible and reminds us all why we fell in love with football in the first place. Agree, Joe Hart?. If Zlatan is on fire, Sweden can burn through any defence.

Yes, after all this time, the 35-year-old captain born in Dublin is still Ireland’s biggest threat. He scores profusely, at least much more often than his teammates. I can’t remember an Irish team without Robbie and this is the last time we are going to experience it. The former Tottenham star is set to bring his best leadership abilities to make Ireland’s tournament one that we can remember with astonishment. You know, Ireland may not be the flashy team we all wish to see, but they can sure stand their ground and fight until the last moment. That’s football for you.

How could Group E develop?

Belgium – Prediction – 1st Place: The Red Devils are my choice for a dark horse, although this might be coming a bit late. If they do not show something wonderful in this tournament, I will consider the ship has sailed on their golden generation. This is it, Hazard! This is it, De Bruyne! There is no time for doubt. If you wish to keep that high place on the list, you do not need only to get out of this tough group alive, but you need to destroy your rivals. Nine points, Belgium, or go home.I am joking, seven points are acceptable too.

Italy – Prediction – 2nd/3rd place: They will have a hard time but they are going through. I do not see them getting too far in the playoffs, but that is just me. Italy needs a chance to take a breathe and maybe this is it. They could naturally reach the final and even take it, but at least six teams are better qualified to do this and they are facing one of them on June 13 in Lyon.

Sweden – Prediction – 2nd/3rd place: Yes, Sweden and Zlatan are joining the last-sixteen party as well. They are either getting in as a good second place or as one of the best third places, but they are getting in. I figure it all comes down to their match against Italy since they will probably beat Ireland in the opening match of the group.

Ireland – Prediction – 4th Place: The Irish might go down, but they will take anyone they are able to, down with them. I hope they prove me wrong and administer the same slow-killing poison they gave Germany during the qualifiers. My guess is that if they are going to do it, it will be on June 22, against Italy. Robbie and the lads might just have what it takes to make the front page around the world after that match.

Mark your calendars, on June 17 in Toulouse, Italy will be facing Sweden. The winner will probably get a ticket and the loser will have to fight for a best third place. Zlatan against Buffon, Insigne against the world and a possibility of seeing an array of beautiful football.