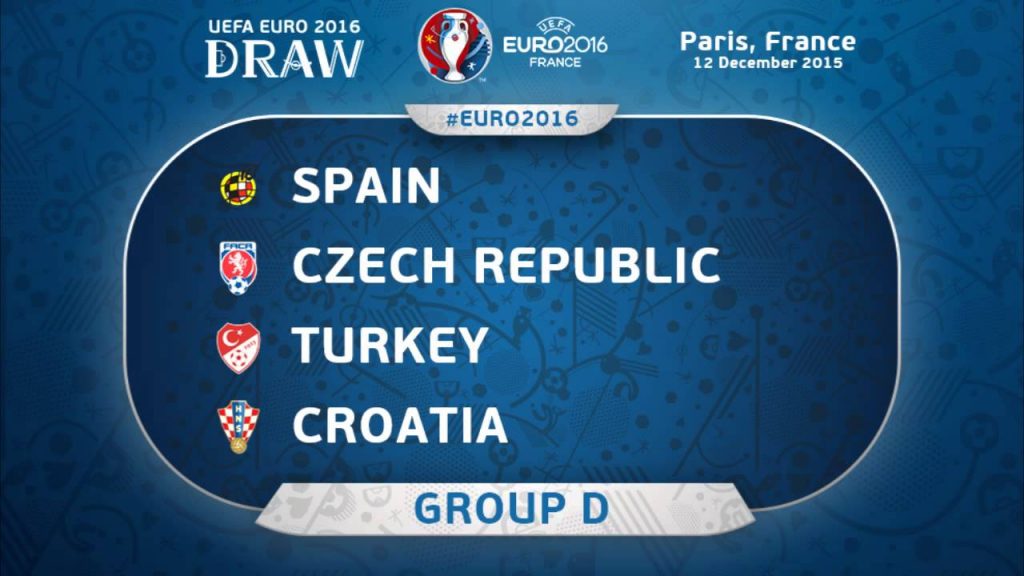 Group D sees current champions Spain’s campaign to defend the title. But the remaining three teams are strong enough to give them a run for their money.

Croatia is filled with wonderful players and they are very used to playing the role they are playing in these type of tournaments: a “might be” dark horse. The Slavic team managed to secure their ticket to France by obtaining one point more than Norway and getting a tie in both matches against Italy. The Croatians scored more goals than any other team within their group and put 5 past Norway to make sure they did not have to play the playoff round, which later saw Norway lose their spot in Euro 2016 to Hungary. Croatia is a very balanced squad and they can ruin any party. Their strong section is their midfield. Croatia’s main midfielders play for Real Madrid (Modrić and Kovačić) and Barcelona (Rakitić) and to top it off, former Bayern München and current Juventus striker, Mario Mandžukić, is in charge of finishing all the magic these three create. Their defence is rock strong and they have everything going for them. On the other hand, they are a part of the group of death and this could kill their hopes to advance.

The Czech Republic is the kind of team we all enjoy to see. Although they do not usually amount to much in official tournaments, their National team is just so wonderful and skilled that is a shame to see them go so early in every tournament. The Czechs were responsible for kicking The Netherlands out by beating them twice and managing to get the top place in their group at the same time. The problem with the Czech Republic is that they allow too many goals. They received more goals than any other team going to the European Championship, conceding fourteen times and only managing to score nineteen. With these numbers, teams like Croatia and Spain won‘t have a problem to break them and end their hopes way too soon. They also faced Turkey twice during the qualifiers, beating them in Istanbul, but losing against them in Prague. On a brighter note, when the Czechs are an experienced thing and they know all of their rivals good enough to take advantage of it.

Spain has become the team to beat in Europe over the last eight years. With a tactical strategy commonly known as tiki-taka, which basically means to have the ball as much as you can and open spaces solely by moving the ball, the Spanish were practically unbeatable for a while. Not only in Europe but all over the world. This came to a halt two years ago when The Netherlands and Chile exposed them during the World Cup in Brazil and the boys managed by Vicente del Bosque have had to tweak their strategy if they wish to keep competing. The reality is that Spain has enough talent to build a competent squad with the boys they left at home: Isco, Cazorla, Costa, Torres, Saúl Ñíguez, Mata, Javi Martínez and Bernat, to name some. The big question for Spain is the goalkeeper position. Iker did not have a wonderful season and De Gea might be getting a chance. It all has to change eventually, doesn‘t it? Spain waltzed through the qualifiers, only conceding thrice and losing only once against Slovakia.

Turkey is a team I enjoy watching play a bit too much. Why? Because they always go all in, there is no middle ground with them. When they qualify for an international tournament, they become a serious contender, except for Euro 1996. But on other occasions, they built enough momentum to reach the quarter-finals in Euro 2000 and achieved a Third Place in the 2002 FIFA World Cup and the 2008 Euro. See what I mean? They are a team that gives everything and that is what will see them through this group; I have no doubt they will get through. How far they‘ll go is up to them and a bit of luck. They managed to obtain a ticket to France 2016 in a very hard group as the best third place of the competition, and their squad is plagued with experienced and talented players. Their midfield is fierce, but they lack strikers that can finish the job.

Since the Croatian midfield is plagued with stars and it is impossible to choose only one, we must think outside the box and figure out what all their efforts are for. Well, all paths go to Mandžu. The Juventus striker will be getting enough chances created by the wonderful midfield behind them to see the Croatian side go through and try to make this Euro 2016 a fairy tale similar to what Davor Šuker did for the National team eighteen years ago in France as well.

Time moves fast and players come and go, but the eternal goalkeeper is still defending his national colours. There is a reason; he is unbelievable amazing at it! Not only is he a safe option, but he conveys trust to his teammates. And, if they have any intention of advancing and solving their critical defensive issue, Petr must fid a way to make a wall out of his defenders. If somebody can do it, it is him. This might be his last international tournament, as well as former Wünderkind, Tomáš Rosický.

Spain needs a Capitán that can steer the ship within the pitch. Even if Iker Casillas is still on goal, the team requires somebody that is able to keep them moving and shifting. The Spanish team must avoid another catastrophe similar to the nightmare they lived during the 2014 FIFA World Cup. Thiago and Morata need to be on top of their game to be useful to the team and play along Andres Iniesta.

The man is a regular and his position is undisputed in Fatih Terim’s squad. He is not only a strong midfielder with leadership skills and experience, but he also scores. He is the second best scorer out of the 23 players that form the Turkish National team. Arda sticks out, but he is surrounded by an amazing team that includes ascending superstar Hakan Çalhanoğlu, Nuri Şahin, and Burak Yılmaz.

How could Group D develop?

Spain – Prediction – 1st Place: It will not be simple, but the Spanish team will make it through. I am not sure whether they will get to the final, but getting out of the group seems like a possible feat for the current champions. Whether they indeed achieve to get first place, will remain to be seen on June 21 in Bordeaux, when they face Croatia.

Croatia – Prediction – 2nd: This is going to be a good tournament for the Slavic team. They have the talent, they have the experience and they are going to have to fight for it. However, this is the way they always do it. When they get to the playoffs, Croatia will become more dangerous with each passing minute. If their midfield connects, there are few teams in the world that can stop them.

Turkey – Prediction – 3rd place: It‘s going to be tough to get out of that group for Turkey but once they do, they can go very far. The expression dark horse was coined after watching Turkey play at the 2002 FIFA World Cup. Yeah, that‘s not true, but it could easily be. Arda Turan’s side has everything to win and nothing to lose and the kind of passion the Turkish players have is difficult to match. Passion wins the tough matches and in this group, every match is a tough one.

Czech Republic – Prediction – 4th Place: I feel bad for saying it, but we were all thinking it. The Czechs are a delightful team to watch, but they never amount to what we expect from them. Their golden generations keep coming and going and there is nothing to show for them. This will not be the exception. If they were a part of any other group, there would be a chance, but in this one, everything is against them; their history, their defense and three teams that will try to destroy them systematically.

Spain vs the Czech Republic.  When? June 13th. Why? Because it has the potential to make this group go the way it is supposed to or shift everything and make the four teams fight a fierce battle to get out alive. This was a tough decision and I advise you not to miss any match from Group D, but this one, in particular, will end up weighing on who goes on and who goes home.