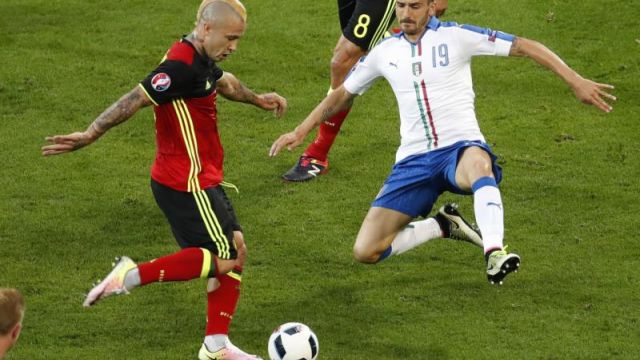 Antonio Conte’s Italy produced a tactical masterclass, as the Azzurri hit the ground running at Euro 2016 following their 2-0 victory over highly-fancied Belgium on Monday.

Belgium, the highest ranked side of the 24 teams participating in Euro 2016, dominated for long spells of the Group E clash at the Stade de Lyon, but goals in either half from Emanuele Giaccherini and Graziano Pelle ensured Italy start their Euro campaign on a winning note.

In the other Group E clash, Sweden being held to a 1-1 draw with the Republic of Ireland earlier at the Stade de France; the victory has put Italy top of the group.

For all the wealth of talent Belgium possess, they have two major weaknesses: first, they still do not know how to play as a team, and secondly, they suffer from an inferiority complex.

The Red Devils are a very talented team and many see them as one of the favourites to lift the Euro trophy. They have a well-balanced team with quality players in every position, starting from their goalkeeper to the front lines. Plus, they are a young talented squad in the middle of a golden generation, yet Marc Wilmots has yet to find a way, a system, a process to assemble them into a force.

The biggest mistake Wilmots made on the night was to start with Marouane Fellaini as #10. Fellaini, a favourite of Louis van Gaal, was given the nod ahead of Tottenham’s Mousa Dembele. Fellaini can be a good impact player, but using him as a creative playmaker is a crime unto itself. His physical presence may prove handy at times, especially towards the end of the game where a direct approach is often required, but he hardly adds any value in the creative department apart from chesting down long balls and laying it off for midfielders to have a crack at goal from long distance.

The bigger damage it did was the resultant shifting of Kevin de Bruyne or Eden Hazard, both being shunted out on the flanks. Belgium only looked threatening when De Bruyne and Hazard started drifting more towards the centre to influence the game.

De Bruyne has been superb for Manchester City in 2015/16 where he was employed as an attacking midfielder behind Sergio Aguero. The role is tailor-made for him as his movement, creativity, incisive passing and long range shots are the qualities that a modern day #10 craves for. And yet, he was stationed on the right side, where his involvement in the game been reduced.

Another glaring mistake the Belgium manager made was to break up the centre-back partnership of Jan Vertonghen and Toby Alderweireld. The duo has been simply outstanding for Tottenham last season, with Spurs, had the joint best defensive record in Premier League, conceding only 35 goals in 2015/16. In the absence of skipper Vincent Kompany, Wilmots should have stuck with his trusted centre-back pairing at the back.

On Monday night, he shifted Vertonghen to the left, while Thomas Vermaelen was paired with Alderweireld at the heart of Belgium’s defence. It didn’t take long enough to realise how porous the Belgian back four was. Whenever the Italians attacked, the Belgium defence panicked.

Not only Belgium’s weakness in defence been brutally exposed but their attack was surprisingly blunt as well. Romelu Lukaku has cut a sorrow figure yet again (his form dipped considerably towards the end of last season with Everton), probably he has lost his focus with plenty of talks going on about his likely transfer from Everton and fluffed his chances when presented with one or two clear-cut scoring opportunities. Divock Origi looked sharp when he came on, but he too was culpable for not taking his chances.

That’s one side of the story. It is easy to criticise Belgium’s lack of desire, constructive moments and all that, but in reality, they failed to pose any real threat to the Italian defence, and the credit solely goes to the defensive ‘BBC’ trio of Andrea Barzagli, Leonardo Bonucci and Giorgio Chiellini for thwarting their attacks at bay. All these players played under Conte at Juventus and the Italian know exactly what to expect of them. In his favourable 3-5-2 system, the trio worked their socks off, making as many as 18 clearances, nine interceptions and three blocks combined.

But the real hero of the match is undoubtedly Bonucci, who showed to the world what a really, really top player he is. He has been one of the best in the business for a few years now and has been linked with a €30m move to Chelsea. It may seem to people outside of a Serie-A centric mindset that he’s been linked because of his natural association with Conte, who is about to take over in London, but surely they found out it’s the quality that Chelsea are looking at.

Bonucci was rock solid at the back, as expected, (it’s an old cliche that the Italians know how to defend) but when he went to the offensive mode, he did produce a sublime pass for Italy’s opening goal against Belgium. That was a typical Andrea Pirlo-esque pass from the 29-year-old who is also a class defender. It’s not easy to pick a 50-yards pass with such precision. With all the limelight being shared by the likes of Pogba, Dybala and other superstars, Bonucci doesn’t get the kind of recognition he deserves. In that respect, he is criminally underrated. But, surely this performance will have caught the attention of top European clubs in the world, and who knows, may prompt Chelsea to lodge a mega bid for him in the summer.