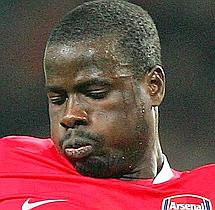 Former Arsenal star Emmanuel Eboue has said that Pep Guardiola was responsible for the decline in Yahya Toure’s career.

The 35-year-old Toure joined City in 2010 from Barcelona and was released by the club at the end of last season.

During his 8-years with the Citizens, Toure established himself as a legend at the club and won three Premier League titles.

In 2011, it was Toure who scored the goal which led City to their first Premier League title in the modern era as he scored during stoppage time to lead his club to a 3-2 win against Queens Park Rangers.

Toure is expected to continue his career and has even been linked with a move to Manchester United.

Since leaving the Etihad Stadium, Toure has been criticizing the club’s manager Guardiola.

It was evident that he was no longer part of the club’s first-team plans last season as he went on to make just 10 Premier League appearances throughout the season.

Eboue who won the Premier League with Arsenal agrees with Toure.

“As a player you sometimes have a period in which you cannot work with a trainer at all, and because of your future, you have to go elsewhere,” Eboue told ESPN. “Obviously, Guardiola and Yaya, my brother, did not get along, it was already from the Barcelona era.

“It is Yaya’s best decision to leave the Guardiola territory because he broke his football career, and I believe Yaya’s last year was a hell because he did not play enough, which is terrible for every professional. If it does not look like the relationship between player and coach gets better, it is better to look elsewhere.

“Yaya is a great player and a leader, I think he can play at the highest level for some years, he’s the kind of player who can tip a match.”