Chelsea winger Eden Hazard once again has confirmed his loyalty to the London club and in the process categorically ruled out any chances of him joining the French outfit Paris Saint Germain in the summer.

PSG are thought to be a keen admirer of Hazard and they want the Belgian superstar to return to French league this summer.

French magazine Le 10 Sport reported last month that Hazard has informed PSG that he is ready to leave Chelsea. Furthermore, the French giants were ready to include Edinson Cavani as a part of the deal for Hazard, in order to convince Jose Mourinho to sell the Belgian. 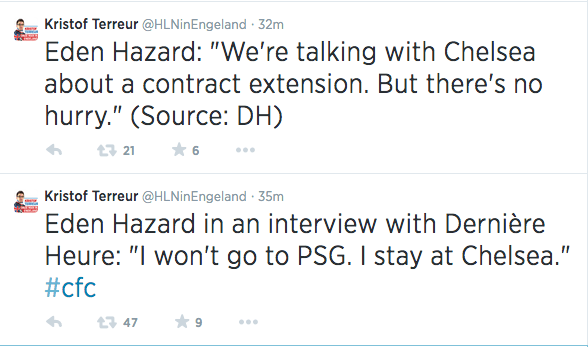 PSG had shown serious interest in Chelsea duo Hazard and Oscar, but the rumour began to take shape when Hazard criticised Mourinho’s tactics after Chelsea’s defeat against Atletico Madrid in the Champions League. As consequence, Mourinho returned with a sharp riposte claiming the player doesn’t sacrifice 100 per cent for the team. It led to intense speculation that the relationship between Hazard and Mourinho is not smooth like before.

Hazard however has quashed rumours of him joining to PSG. When he was handed the no 10 jersey recently, he said:

“I am very pleased to be able to wear the number 10 for Chelsea. It is my favourite number and is one I am used to wearing for the national team, as well as the one worn by some of my heroes from when I was a kid, like Zinedine Zidane.”

“I hope it brings me a lot of luck in the future and I look forward to the fans seeing me in it next season.”

Also, last month, Hazard commented on his future in an interview with Belgian newspaper Sportwereld, where he said: “Everyone who knows me, knows that I will not be destabilised by such rumors. Every year I am quoted everywhere. That’s part of my job. I concentrate on the World Cup. “

And now, he has made it crystal clear, during an interview with Dernière Heure, where he said: “I won’t go to PSG. I stay at Chelsea.”