Dubious or not? Controversial refereeing decisions involving Barcelona in the Champions League 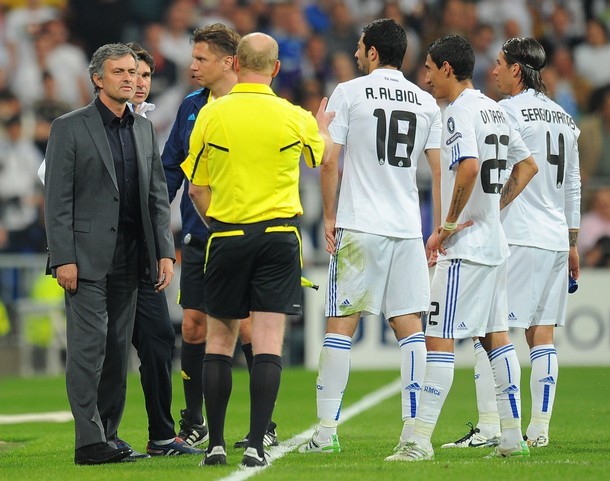 The build-up and aftermath of Barcelona’s victory over Real Madrid in their first-leg Champions League semi-final has been marred by Jose Mourinho’s comments regarding Coach Pep Guardiola and referees.

The 0-2 defeat at the Bernabeu now leaves the nine-time winners aspiration of making it a perfect 10 in complete ruin. Los Blancos had Pepe sent off after a challenge on Dani Alves as well as Mourinho himself being banished from the technical area and into the stands following his protest.

What followed in the Portuguese tactician’s post-match press conference was nothing short of startling. In a rare glimpse of weakness, Mourinho showed sorrow and distain, evidently hurt by what had transpired over the course of the game.

It has been no secret that the Madrid Coach has spoken publically about referees during his tenure at various clubs and paid no exception to Wolfgang Stark who dismissed both him and his player. This lead to comments questioning Barcelona’s relationship with officials – which Mourinho believes is more than just general coincidence:

“I didn’t say anything to the referee, I simply laughed and showed my thumbs up.” Mourinho told reporters in his post-match press conference.

“That was it. If I say to him and UEFA what I think my career ends today. I can’t say what I feel. I only leave one question. Why? Why? Ovrebo, Busacca, Frisk, Stark? (referees involved in Barcelona matches in the past) Why to all these people?”

“No-one else has any chance really. Arsène Wenger. Today myself. I don’t understand why. I hope one day I will find the answer.”

With Mourinho bringing up past refereeing decisions regarding the Blaugrana, we have taken a look back at some high profile incidents involving the Catalonians and the men in black within Europe’s premier competition.

Does Mourinho have a point? Dubious or not? Decide for yourself. 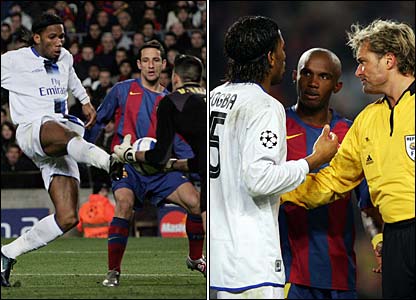 Mourinho’s first encounter with his old employers came during his first season at Stamford Bridge with Chelsea where both sides met in the last-16. After a stellar performance by The Blues in the opening period of the first-leg where they had taken the lead thanks to a Juliano Belletti own-goal, Didier Drogba was dismissed early on in the second-half after colliding with goalkeeper Victor Valdes.

The uproar that followed was immense. Mourinho was visibly disgruntled on the touchline and was seen mouthing to the fourth official that he witnessed referee Anders Frisk chatting with the then Barca Coach, Frank Rijkaard, at half-time.

Mourinho told Portuguese newspaper Dez Record following the game; “When I saw Rijkaard entering the referee’s dressing room I couldn’t believe it. When Didier Drogba was sent off (after half-time) I wasn’t surprised.”

Referee Frisk ended up retiring from the game with immediate effect after receiving death threats. Chelsea ended up losing the game 2-1 but progressed to the quarter-final after a 4-2 win in the return tie. 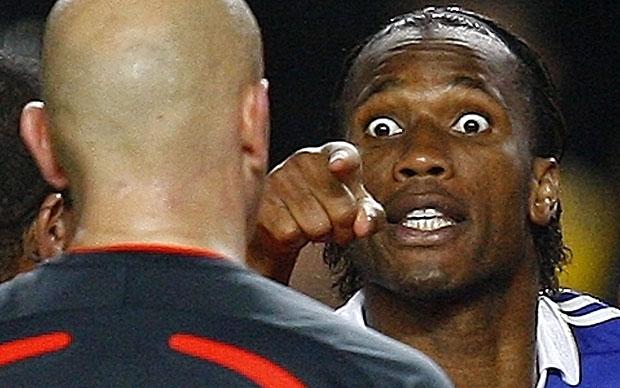 Guus Hiddink and his Chelsea side were lambasted for a defensive sided approach during their first-leg tie with Barcelona in the semi-final. Although they offered minuscule effort in attack, they left the Camp Nou with a result and a genuine opportunity for progression to the final in Rome.

They took the lead in the return tie at Stamford Bridge thanks to a wonder strike by Michael Essien and played a valiant game where they had their opponents on the ropes.

However, they had numerous appeals turned away by referee Tom Henning for penalties, various handballs and an obvious obstruction of a goal-scoring opportunity by Yaya Toure. Although Henning sent-off Eric Abidal for what seemed little more than a tangle of legs with Nicolas Anelka, it was obvious to the eyes of the watching world that he had indeed missed a number of vital calls.

Andres Iniesta’s dramatic stoppage time equaliser sent Guardiola’s men into the showcase final via away goals where Manchester United lay in wait, leading to venomous hysteria by those in blue. Striker Didier Drogba vented his feelings towards the television camera claiming Henning as a “f****** disgrace”, and his manager Hiddink speculating that UEFA may not have wanted another all-English final (Manchester United met Chelsea the previous year in the final at Moscow).

Hiddink said that night; ”Conspiracy is a very tough word and, if there is, you have to prove it. Obviously there is a lot written and said prior to this game. I can only mention what I see. I cannot say whether UEFA wouldn’t like another English final.” 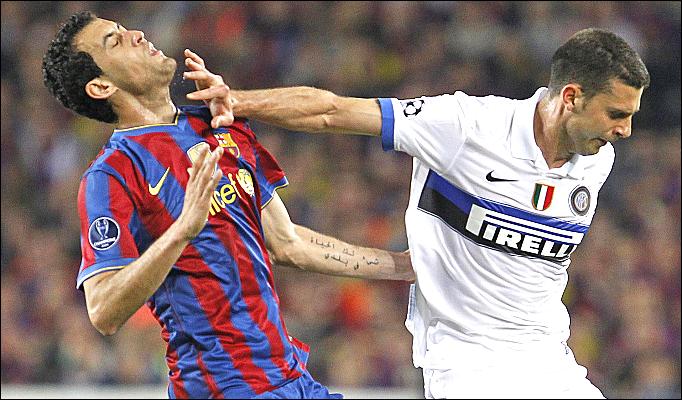 Jose Mourinho’s Nerazzurri had conjured up a magnificent 3-1 first-leg victory at the San Siro and knew that they were on the brink of their first European Cup Final in 38 years.

After half an hour of play in the second-leg, and still goalless, Inter midfielder Thiago Motta was brandished a second yellow card after his fingers brushed against the neck of Sergio Busquets who fell to the turf in a heap, clutching his face. Camera angles showed the Spanish midfielder peering through his fingers as he rolled around to see the outcome of referee Franck De Bleeckere’s decision.

Motta said after the game: “He always does it, I have seen it on TV and he is holding his face and then looking at the referee – it is terrible behaviour.”

Gerard Pique scored the only goal of the game but it wasn’t enough and Inter progressed on aggregate, subsequently winning the final – without the suspended Motta. 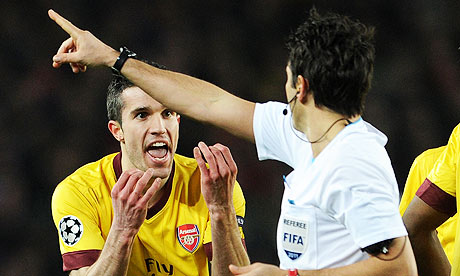 The Gunners won the first-leg of their last-16 tie 2-1 at The Emirates. After falling a goal behind in the return leg, they equalised thanks to a Sergio Busquets own-goal early on in the second-half.

Already on a booking, striker Robin van Persie looked to latch onto a ball over the top of the Barca defence where he took his shot on despite the referee blowing for offside a second or so prior. Massimo Busacca interpreted that as time wasting by van Persie and brandished him a second yellow card to the bemusement of the Dutchman, who evidently failed to hear the whistle due to the mass volumeof noise  generated by those in the stadium.

Arsenal were subsequently defeated 3-1 and crashed out. Van Persie was less than impressed with the performance of the referee:

“In my opinion it was a total joke the sending off because how can I hear his whistle with 95,000 people jumping up, how can I hear that? I could understand the referee’s decision if there was four, five, six seconds in between and you make a chip or something, but one second from his whistle to my shot is a joke. But he’s been bad all evening, he’s been a joke all evening, whistling against us, I don’t know why he’s here tonight, I think he’s a joke.”