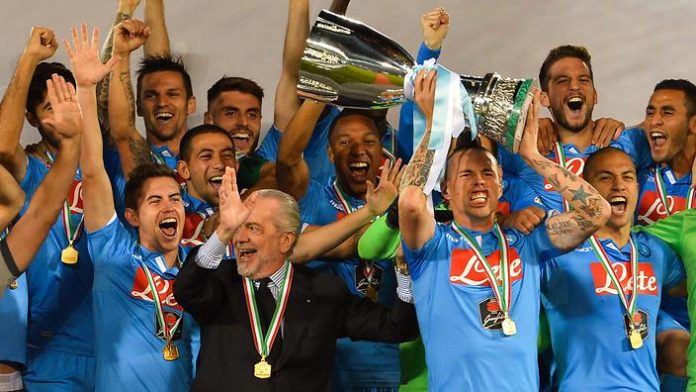 It was to be a night of spectacle, or so all relevant authorities hoped. After the sordid events that surrounded the 2014 Coppa Italia final earlier this year, Italian football desperately needed a showpiece match that cast a positive light. The Supercoppa Italiana was to be it, but the annual meeting of the reigning Serie A champions and cup holders wasn’t to be staged during the fixture’s natural time slot.

Napoli – who emerged 3-1 winners over Fiorentina at the Stadio Olimpico in May against the backdrop of tragic violence in Rome – were due to take part in the Champions League play-off round in late August. The traditional curtain-raiser that is the Supercoppa was thus shunted to the side, replaced by the Partenopei’s devastating elimination from Europe’s elite competition at the hands of Athletic Bilbao. The chance to start off the campaign with a piece of silverware had been supplanted by an aggregate defeat that was as damaging to Napoli’s bank account as it was to the club’s prestige – and Serie A’s image.

Months on, however, early season turmoil gave way to Italian football’s yearly winter break. The Supercoppa Italiana would finally belatedly be contested, almost something of an afterthought in the midst of overarching analysis of the opening act of the current term in Serie A. Moreover, the match between the wholly polarised forces of Juventus and Napoli – representing the deep divisions between the north and south of Italy – wasn’t to even be played within the country’s borders. For the seventh time in the competition’s 27-year history, it was scheduled to be played abroad – this time, in Doha.

With the match set to be staged on Qatari soil, the usual reactions from a few figures in Italian football were triggered. Why should the spectacle be taken elsewhere? Are fans of the involved clubs not alienated by sending their sides to compete on an entirely different continent? But by kick-off, such questions didn’t matter – neither did any of the oft-made suggestions that the Supercoppa is nothing more than a glorified friendly.

Instead of a hollow affair, the match was a gripping one in the intimate 14,000-seat Jasim Bin Hamad Stadium. Through ebbs and flows from their respective sides, a pair of Argentine internationals shone brightest. Gonzalo Higuain twice answered goals from Carlos Tevez – each Albiceleste man scoring in regulation and extra-time – before a thrilling penalty shoot-out settled affairs in favour of Napoli. There was none of the negativity that surrounded the Coppa Italia final in May. Instead, the focus was on a pair of South American strikers fighting tooth and nail for their respective causes. Then, it was the goalkeepers’ opportunity to shine when it came time for penalty kicks, with young Rafael proving the hero despite a superb effort from the legendary Gianluigi Buffon. The Supercoppa was a wonderful advert for Italian football this time around, with everything one could’ve asked for in supply.

Back in Rome, some 2,500 miles away from the handsome festival taking place on the Persian Gulf, Italian football was in the midst of securing another victory. In the Aula Giulio Cesare at Palazzo Senatorio, the Assemblea Capitolina – Rome’s city council – convened to discuss whether Roma’s proposed new stadium qualified as being in the public interest, a requirement for the project to be allowed to go ahead. A protracted meeting gave way to a council vote on the topic, in which the capital outfit secured the necessary support. After a drawn out fight to slash through the red tape that has hindered Italian clubs’ ability to build their own grounds for years, Roma had cleared a significant hurdle.

Able to offer the Eternal City a considerable 3,000 jobs while the stadium is built and as many if not more once the Stadio della Roma is operational, the Giallorossi made quite a case for themselves. Also to take into account is that the €1.2 billion ground will be entirely privately financed. The business and political nous of Roma president James Pallotta and CEO Mark Pannes – who developed a strong rapport with Mayor Ignazio Marino – were essential to bringing the project to this advanced stage. Where other Italian clubs have lacked the fortitude or ingenuity to triumph in a system that is stacked against them, Roma have found a way. There’s still one more round of pugilism to endure, however. The Regione Lazio still must approve the Giallorossi’s plans, though if their ability to grease the skids at every other level is any indication, Roma are likely to succeed.

The underlying theme is modernisation. As English and German football have transitioned into a new era rather smoothly, the game in Italy has become a relic by comparative standards. Italy’s crumbling, publically-owned stadiums have long stood as a symbol of decay, of a general lack of interest in long-term thinking and solutions with far-sweeping positive implications. So too has the product that’s been put out on Serie A pitches over the past few years. Italian football has been poorly packaged, marketed inadequately and defined too heavily by storylines of tribalism rather than those of a sporting nature. The impact of such failure has been devastating on a financial level, leaving what was once Europe’s preeminent league to climb back up a mountain in a driving snowstorm.

While Roma were pursuing the title of Serie A’s fourth club to own their own ground – following Juventus, Udinese and Sassuolo – Juventus and Napoli were in Doha serving as ambassadors to the world. Both sides showed up to play, putting out a good word for the peninsula’s football in a game that was seen around the globe. Playing the Supercoppa on foreign soil remains one of the few productive choices Italian football has made down the years from a marketing standpoint.

On Monday, Qatar joined the United States, Libya and China on the list of nations to host the traditional tilt between the Scudetto holders and Coppa Italia champions. Six of the last 13 editions have taken place outside of Italy. A total of 332,000 spectators have passed through the turnstiles to see these six contests. The decision to take the competition elsewhere may be unpopular in some circles in Italy, but doing so has immeasurable value. When clubs and players become tangible, they’re more likely to generate interest, even thousands of miles away from where they’re headquartered. Like building new stadiums that generate increased revenue, upgrade currently lacklustre security and improve atmosphere, expanding international fan bases is vital.

Italian football must embrace this type of modern thinking as a whole, changing the all-too-familiar narrative surrounding the game in the bel paese. The laundry list of latent issues includes struggles in Europe, an inability to hold on to and develop young talent and a playing philosophy that doesn’t put enough emphasis on fitness. But these are all problems that would be more easily addressed if the proper infrastructure was in place – the likes of serviceable venues and worldwide markets. On Monday, two examples of progress were evident. A year that has seen Italian football dealt plenty of body blows has in turn come to an end in an unlikely fashion – encouragingly. It remains to be seen whether this momentum will carry in 2015, but the events that unfolded early this week showed that with industry and proper decision making, brighter days could be on the way for il calcio.