Italy, Uruguay & England. Three teams in the same group, all in the top 10 of the official FIFA rankings, is there ever a better definition of a group of death? Probably not. As analysts, fans, experts, pundits & indeed players scrambled to accurately predict which of these traditional footballing powers would emerge from the group, and which would drop out, a little factor was over-looked; a factor called Costa Rica.

As it turns out, England is out, one of Italy/Uruguay will be gone too, but the Costa Ricans can rest easy knowing they have atleast one match after the group stage to look out for. In a group of death, where no one considered their existence, Costa Rica have come out victorious, and may well emerge as the first-place side. Quite remarkable isn’t it?

So how have they managed to achieve this? Was it luck? Was it the weather? Or were the Costa Ricans deserving of their success?

Full-backs influence on the counter

A major reason for Costa Rica’s success was how effectively they played a counter-attacking system that managed to catch the opposition out. Being a side that has been over-looked, they naturally tend to set-up deeper and more defensively. This has attracted team’s forward leaving them short at the back. 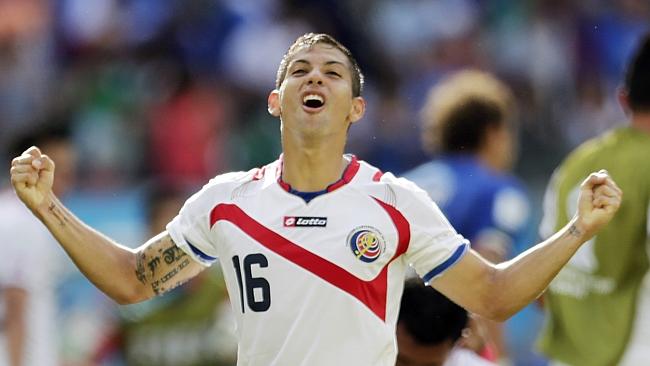 Pinto’s side efficiently soak in the pressure, helped by a five-man defence and four man midfield set-up, but at the slightest chances of possession, they quickly release it to their more attack minded players, with one of the two full-backs making a run in as well. This wide positioning in attack has ensured Costa Rica have a quick counter on their side. Most counter-attacking systems lay emphasis on the wide or front-men, but this one favouring the full-backs above all means the opposition don’t have a system to contain these players.

We’ve seen in both games how this wide area has proved effective for the Costa Ricans with a lot of their attack coming from this position. These full-backs (Gamboa & Diaz) have impressed me because usually in a 5 man defence, wide defenders play the attacking role of wing-backs, but despite their attacking contribution, they remain extremely effective in a defensive capacity, which other full-backs have failed to do so.

One of the first thing you would notice while watching Jorge Luis Pinto’s side is their excellent organisation, especially in a defensive capacity.

The Costa Rican side play a system that involves importance to positional sense, with very little room for creative freedom. Attackers (except the player below) and defensive players have an important defensive role to play to contain the opposition before producing their own attack.

The coach has set out a system with a deep midfield line, to protect their deep defensive line. Their full-backs are encouraged forward but are required to influence their defensive side more. We’ve thus seen how when one goes forward the other full-back stays back, meaning they usually have four of their five men almost always back in defence. It makes their individual attacks one dimensional, but doesn’t cost them in defence. This is why they’ve conceded just one against both Uruguay and Italy.

Another major factor in ensuring that the Costa Ricans pulled off this miracle result was in the form of a certain young striker, Joel Campbell. The Arsenal owned loan sensation performed quite remarkably as he looked to lead his nation at the World Cup.

Anyone that has seen Campbell in action will tell you how explosive a player he is. The striker has the ability to influence his team’s attack almost single handedly, even if not well supported in terms of attacking players. He was seen causing a nuisance in opposition defences with his clever movement to draw away from markers and open up spaces for the likes of Bryan Ruiz.

His ability to function as a lone striker is quite remarkable, as a team like Costa Rica which relies on it’s defensive solidity, to be able to be active throughout and effective when the ball is played in your zone, is no easy task. Even at a young age Joel Campbell has led the Costa Ricans to some fabulous results in what is turning out to be their greatest ever World Cup run.

Campbell scored one and set-up another against Uruguay while also having a clear penalty shout against Italy turned away. He’s displayed excellent upper body strength, composure on the ball, intelligent play off it, and that explosive nature of his. It’s a World Cup that Campbell really has made a name for himself, but as stated, his influence in this system is quite remarkable, and one will naturally questions it’s consistency.

It’s quite incredible what Costa Rica has achieved this World Cup, not a single expert could have seen this coming, but somehow we find this tiny footballing nation in the Round of 16.