In these heady days of multi-billionaire takeovers of clubs in the English Premiership and Championship, the subject of developing young players has again risen to the fore.

With the best overseas talent being bought up by the top clubs, it is a case of the rich getting richer and the poor getting poorer. For other top clubs and particularly lower league and non-league clubs, the only way forward is to develop their own young talent and hope that those home grown players can either take them to the top or be sold for a substantial amount to keep the club going.

With that in mind I thought I would take a look at the coaching and development of young players and some of the best training drills that can be used to develop them. Many of these can be adapted for use in adult football as well. 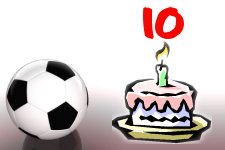 There are some basic concepts to understand about coaching youngsters. There is a massive difference between coaching children aged 10 or below and those over the age of 10 .

The Under-10s are very self-centered and their physical characteristics, i.e. how big they are, fast they are, etc, will define how they feel about their own capabilities.

Another thing with the Under-10s is that they will have little concept of playing in a team. They will tend to follow the ball around the pitch and will be unlikely to pass, as they will not want to lose possession once they have it. Their awareness of space is simply not developed and no amount of coaching will change that.

This is when the coach can start looking to build individual players within a team framework. The training sessions should start to encourage co-operation between the players. The importance of helping the player on the ball and the whole concept of attacking and defending can be introduced. Players can be coached in running with the ball, turning, dribbling and defensive skills like interception and blocking.

Once children reach ten years of age they are probably old enough to use a full-size adult football. Small-sided games should still be used as players will be more involved. Playing in a reduced area will also force players to make decisions more quickly. That decision-making can also be developed with the use of two or three touch games.

The most important thing for the coach to remember at this time is that the drills or games need to be set up and explained, after which the coach should allow the children to play the game and let the game itself be the teacher. The players will learn for themselves without constant interruptions from the coach.
. 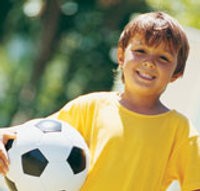 The key to having an enjoyable training session, and ensuring that the players develop in the way that we all want is to ensure that everyone has fun. That includes the coach. Players are far more likely to learn from a coach who is enjoying what he or she does.

The successful coach can only do this with the aid of careful planning. Always think about what it is you want to achieve beforehand and know how you are going to try to achieve your goals.

Your training session plan should obviously take into account the ages and capabilities of your players, but it is possible to work around a basic regular pattern.

The coach must be flexible. You must be willing to adapt the session according to what you see and hear during the session. Above all, remember that the players do not want you constantly interrupting them and shouting instructions at them. Let them play!
.

Whilst all sessions will be different, here are some basic do’s and don’ts:

Here are three exercises that teach young players so much about the game:
. 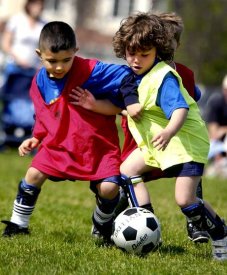 This exercise is fun for the players, introduces a strong element of competition and teaches many skills. It allows the coach to work on many aspects of the game at the same time.

The coach will need to set up a playing area of around 20 x 40 yds. marked out by cones. Place two cones about 1 yard apart in the middle of both ends to form goals. Divide your players into two equal teams.

The teams line up outside the pitch behind the goals, opposite each other. Give each player a number.

The coach starts the game by throwing the ball on to the pitch and calling a number. The players of that number from each team run into the field of play and try to score through the opposite goal.

You can impose any conditions you want on how a goal can be scored depending on what you are trying to teach. The session will obviously be about dribbling and beating an opponent, but defending techniques, such as closing down, positioning between the attacker and the goal and staying on your feet, can also be emphasised and reinforced.

Once a player scores, award that team one point. After the players are back into position call out another number.

To develop the game further you can call out a second number while the first pair are playing. Now you have a 2 v 2 team situation which allows you to focus on defensive techniques, communication, quick passing and running off the ball and support.
.

For young players, games of 4 against 4 are an excellent learning tool. Small pictures are clearer for children with the space, and options are more compatible with their abilities. 4 v 4 is the smallest sided game you can have that has all the elements of a real football match without any of the added complications of the full size game.

To explain what I mean by that, in a real match children have the option of passing the ball forwards, square or backwards. Three children cannot do this because one of the options will be missing. 4 v 4 also provides the minimum numbers needed for all of the parts that make up the team game. One player is up top, two are needed for width and one holds back to supply the depth. In 4 v 4 the responsibilities are very clear. All tasks are covered and none are shared, which keeps things simple.

You are improving young players’ technique through a far greater number of touches of the ball. The emphasis on control and passing gives the players the practice and skills to develop the type of football we all want to see. Its fun for all the players, they are all involved, they attack and they defend. The number of passes is increased and therefore the one touch control and one touch passing improve all the time. It is football learning at its best. It is fun, but it creates real match situations.

If your young side plays good football they may come unstuck and lose against big sides who can kick the ball hard and a long way. It is difficult, but the youth coach has to accept that he may lose some matches for the long-term benefit of the players he is coaching.
.

The simple 4×4 game can be developed to introduce the concept of a playmaker. All kids can have a go at playing the role and they will develop their passing, receiving and decision making.

So the idea behind this training session is to encourage the development of a playmaker. The player will be working on his technique, passing and receiving, and his communication and decision-making, whilst the other players will continue to learn all they learn from the basic 4 x 4 game as well as looking to exploit the use of the extra player.

Set up a 4 v 4 match as before, then choose your playmaker who is the extra player. Put him or her in a different coloured bib/pinnie. That player then plays for whichever team is in possession. For either team to score a goal the play must go through the playmaker.

Do not leave any one player in the role of playmaker for too long as it will be a tiring role for them to undertake.
. 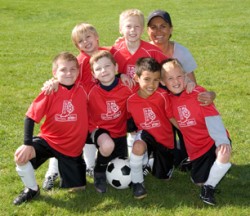 Obviously, players need individual coaching on how to kick a ball, pass a ball, control a ball, etc, and there are many good ways of doing that. In this article I have tried to look at the best way to develop young players generally in a fun way that teaches them how to play the game.

If I could pass on the best advice I have ever heard for coaches of young players it would be the following:

1. Make it fun.
2. Don’t talk too much. Let the game be the teacher.
3. Play lots and lots of variations on small-sided games.
4. Encourage and teach. Don’t criticise.
5. Plan, plan, plan and plan and then be prepared to throw away the plan if it doesn’t work!

How Long Can ‘Tinkerman’ Last At Leicester?