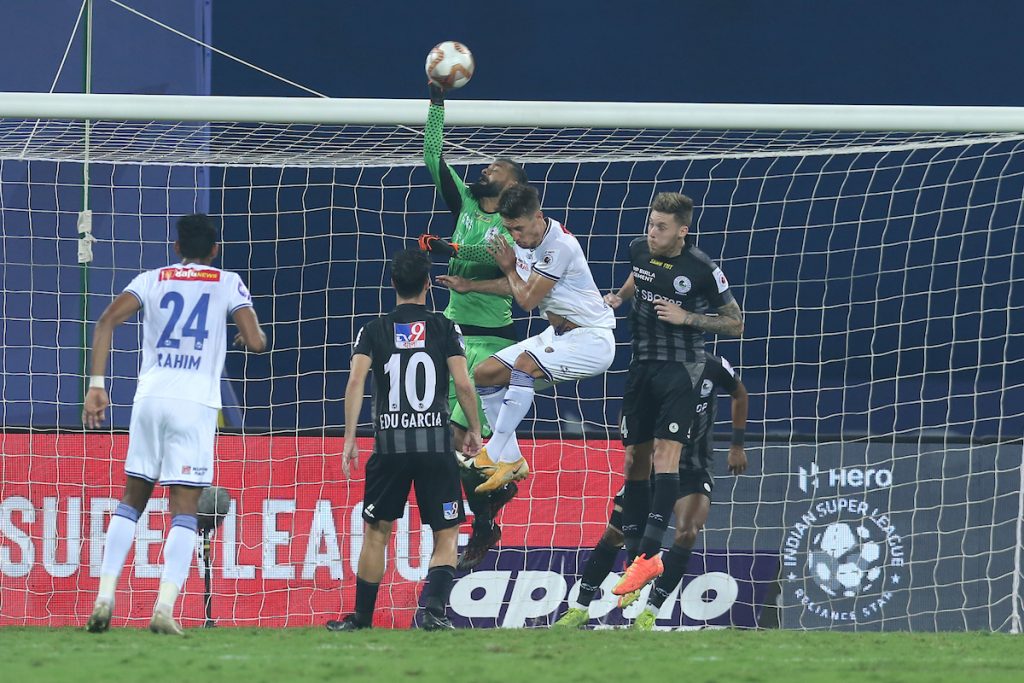 The penultimate Indian Super League fixture of 2020 was somewhat of a repeat of last season’s final, as 7th-placed Chennaiyin FC took on 2nd-placed ATK Mohun Bagan. Both sides were in decent form, as the Marina Machans were unbeaten in their last three games and the Mariners won their last two matches, but one of those runs was sure to end tonight. A tasty fixture was in store, and here’s what we made of it:

Chennaiyin FC looked very nervous in the opening stages, but they had the first big chance in the 5th minute of the match when Jakub Sylvestr brilliantly slipped Rafael Crivellaro in behind the defence with a reverse pass, but he failed to beat Arindam Bhattacharya at his near post from close range. Three minutes later, Lallianzuala Chhangte had a look from the left of the box, but he dragged his effort wide of the far post. ATK Mohun Bagan came quite close to scoring in the 20th minute when Chhangte’s deflected clearance after a throw zigzagged its way into the box where Roy Krishna was waiting to poke it towards goal, but it just went wide. Eight minutes later, Edu García swung a cross to the far post, where David Williams was attacking it, but he didn’t get any proper contact on it as Reagan Singh seemingly clipped his standing foot. In the 43rd minute, Enes Sipović had a good chance when Memo cushioned a free-kick for him in the centre of the box, but his first-time effort was straight at the keeper. Chennaiyin had the first chance of the second half too when Vishal Kaith punted a long ball forward to Lallianzuala Chhangte, who ran through on goal on the left and forced Arindam Bhattacharya to tip his finish away for a corner. It was Memo’s turn next to test Arindam in the 66th minute, as he smashed a free-kick towards goal, forcing the keeper to tip it over the crossbar. The keeper was called into action once again in the 79th minute as Reagan Singh burst up the right and looked to be picking out the bottom corner with his effort, but Arindam just got a fingertip to it.

So, neither side managed to trouble the scorekeeper, and the match ended in a 0-0 draw.

After a disappointing draw against East Bengal, Chennaiyin FC came against a much tougher side in the other Kolkata-based outfit. Tonight, they knew that any mistakes would be punished thoroughly, but that didn’t deter them from failing to convert from a few presentable positions early on in the first half, most notably when Rafael Crivellaro got in behind the defence. The Marina Machans’ defence, and Enes Sipović in particular, looked absolutely solid, however, and bar one penalty shout, their goal suffered no threats. The second period was an intense tactical standoff with no real openings until the late stages. Once again, Chennaiyin FC looked the better side defensively and created more chances, although they failed to make anything substantial at the right end, they made sure ATKMB couldn’t get a half-chance either as they shut the Mariners down for the first time this season.

What a fantastic game! Proud of the shift put in by the boys. 2021 awaits a new dawn for us! #AllInForChennaiyin https://t.co/ba6STIxu6P

While Chennaiyin might not have been able to snatch a winner late on, they took away an extremely hard-fought point which they should surely be proud of, unlike last time when they were made to rue missed chances.

As far as rock-solid defensive performances go, they don’t much better than Enes Sipović’s showing tonight. The Bosnian centre-back came against one of his strongest opponents in Roy Krishna tonight, but he had him under control for all of the match. Within the first 20 seconds, he had to head a long ball away from the Fijian striker, and in stoppage-time, he had to block the ATKMB man’s shot. In between, it was more of the same, as he kept last season’s joint-top scorer in touching distance for the entirety of the match.

The 30-year-old defender made 10 clearances, won 5/6 goals and completed 77% of his passes in an outstanding display. What a showing to earn a well-deserved third clean sheet of the season.

An Anticlimactic Ending For Once

Antonio López Habas has pulled out a few tactical masterstrokes this season, while in other cases, his men have smashed-and-grabbed late on. This time, things were a little different. ATK Mohun Bagan surprisingly did not completely park the bus in the first half, as they looked to match Chennaiyin FC’s intensity with their press and even kept 50% of the ball. Both sides had decent chances to score, but neither could capitalise, and this probably wasn’t an issue for the Mariners, who have mostly dealt their damage in the second period. For a change, though, the away side couldn’t seemingly flick a switch at half-time to generate more attacking intent in the second half, as they had to do a lot more defending and couldn’t really bother Vishal Kaith in the Chennaiyin FC. To add to that, as the match wore on, ATKMB’s press started to lose intensity, but so did Chennaiyin FC, and in the chaotic last 10 minutes, Roy Krishna had the biggest chance to score, but for once, even he couldn’t deliver a decisive blow. This was the first time this season that ATK Mohun Bagan haven’t grabbed a late winner after keeping a clean sheet, but they can’t expect things to keep going their way forever.

Arindam Bhattacharya was the Hero of the Match in last season’s final between Chennaiyin FC and ATK, and he delivered a similarly outstanding performance tonight. The ATKMB shot-stopper looked simply unbeatable in his goal from the very beginning of this match, when he smartly kept Rafael Crivellaro’s close-range effort out. He had to stay at the top of his game throughout the match, and his next big moment came in the second period when he somehow got a fingertip to Reagan Singh’s bottom corner-bound effort.

What a fantastic performance from Arindam tonight. Single handedly earned a point for the team. Amidst all the big stars, people tend to forget how crucial Arindam is for this team. Has added so much stability, cut out the errors and by all accounts a proper team man.#CFCATKMB

The ex-Mumbai City man made 7 crucial saves, including 5 off shots from inside the box, and won 2 aerial duels to keep his net untroubled. A wall-like showing.

Chennaiyin FC stay in 7th place while ATK Mohun Bagan climb to the top of the table despite failing to score for the first time this season. The Marina Machans played out their fourth draw of the campaign, which was only the fourth time that neither side managed to score in an ISL match this season, with Chennaiyin participating in three of those affairs. Chennaiyin FC take on Hyderabad FC next on Monday, while ATK Mohun Bagan’s next assignment sees them meet NorthEast United on Sunday. Stats courtesy Sofascore.com