Chelsea winger Eden Hazard has moved to dismiss rumours linking him with a move to Ligue 1 leaders PSG.

The Belgian, who is in scintillating form this season, moved to Stamford Bridge in 2012 for a fee of £32m, and is in no rush to leave West London,

“This was the case when I was in Lille. The name of Paris frequently in rumors, because it is a club that has money, a big club. But I’m Chelsea, I play all the time, I like it here, so there is no chance to see me go in this winter transfer window. Even this summer, I did not want to leave. I am here. I think this is the best place to grow. “

For our French speaking audience, check out the full interview with Hazard below.

Chelsea fans will be delighted, as they would surely be loathe to lose what is currently their best attacking outlet this season.

The 23-year-old has nine goals and eight assists so far this campaign, and has earned rave reviews for his speed, guile and trickery. Most of all, Hazard has become much more attuned to the defensive side of his game; an essential trait if you are to succeed under the stewardship of Jose Mourinho.

Demba Ba and Samuel Eto’o also took part in the French interview, and the latter has also spoken recently of a potential move to La Liga after his one-year contract at Stamford Bridge expires. 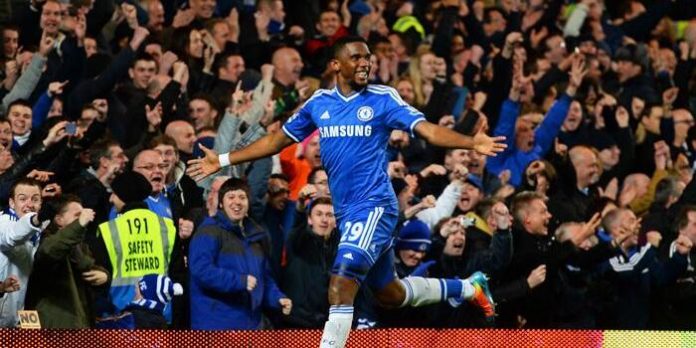 The 32-year-old, who joined the Blues on a free transfer in the summer, scored a hat-trick in Chelsea’s 3-1 win over Manchester United yesterday, but is already thinking of the next step in his illustrious career,

“My son puts pressure on me for me to retire to Majorca,” said Eto’o (via Mundo Deportivo)

“I signed up for the whole season Chelsea and I intend to enjoy it. After that, we’ll see about Majorca .”

What do you think? Should Chelsea try and keep Eto’o? Should Hazard stay? Let me know in the comments below…