Chelsea’s pursuit of German international striker, Andre Schurrle, finally came to a conclusion on Tuesday, with the 22-year-old penning a five-year deal for a fee of £18 million.

Although not one of their most expensive outlays in recent times, Schurrle is a talented acquisition, who will undoubtedly put even more pressure on what is already a crowded attacking roster at the Stamford Bridge. 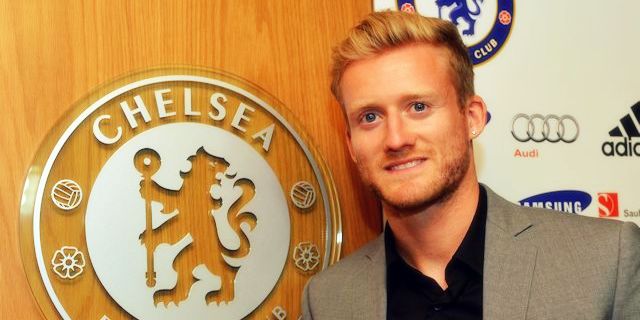 The former Bayer Leverkusen man is rather multi-faceted in his attacking makeup, and he was often deployed on the wing or even as a second striker at the Bundesliga club last season.

“Wide on the left is my best position because I can cut inside and score goals with my right foot, which I hope to be able to do here, but I am confident playing anywhere offensively.”

But whispers in the wind talk of bigger fish to fry; of goliath transfer fees, and a wavy-haired, South American ‘Matador’. Yet another superstar striker may be arriving at Chelsea to finally dispel the malevolent idea that Chelsea’s mega-strikers fall desperately from grace with a whimper.

Edinson Cavani, the 26-year-old Napoli striker, has been strongly linked with the Blues since the early days of this summer’s transfer window. Those rumours came to a head late on Monday evening, with the proclamation from the Italian club’s official radio station that the Uruguayan was set to join the Europa League winners next season in a whopping £49.3 million deal.

In a statement, Radio Marte, announced:

“We have received news in the office from a very reliable source that Napoli have sealed a deal with Chelsea for Cavani’s sale.

“Rafa Benitez also gave the all-clear, but before making the move official Napoli want to secure the striker who will replace Il Matador.

“Aurelio de Laurentiis’ club will pick up around €58 million, a slight discount on the buy-out clause, which is the same situation as Ezequiel Lavezzi to PSG last year.

“The player will earn €8.5 million per season plus image rights.’

While these claims have not been made official by the player or the club, the detail contained in the statement gives real food for thought. The powerful hit man dominated Serie A last season, topping the goal scoring charts with 29 goals. With Chelsea aching for a consistently destructive front man ever since the departure of club legend, Didier Drogba, Cavani may just be the antidote.

But Chelsea’s record with big name strikers in the ten years of Roman Abramovich’s ownership has been less than convincing. Bar the aforementioned Drogba, and perhaps the Frenchman, Nicolas Anelka, Chelsea have struggled to find a deadly spark up top for some years, despite the copious amounts spent in its pursuit.

Claudio Ranieri was the first Chelsea boss to take a whack with the Russian’s cheque-book in 2003, and it came in the form of Hernan Crespo and Adrian Mutu, both of whom did little to stoke the fires at the Bridge.

Crespo, in his pomp, was an absolute master of the offside trap, ghosting almost translucently between static defences with supple ease. But the Argentine just couldn’t translate this into a consistent goal-scoring ratio during his time in England.

The Romanian Mutu’s initial bright start in the Premier League club soon went up in smoke (and other things). Now a legally-embroiled 34-year-old, his antics off the pitch have deprived him of a more glittering career.

The ‘Striker’s Graveyard’ trend was arguably first devised following the departure of the Serbian, Mateja Kezman, who is best remembered for being the rotten half of the footballing ‘Dynamic Duo’, Kezman and Robben.

The names Andriy Shevchenko and Fernando Torres complete the rogues’ gallery, bringing the combined transfer fees to a colossal £117.6 million shelled out by Abramovich for the five flops.

Chelsea’s strikers last season, Torres and the Senegalese, Demba Ba, only managed a measly ten goals all season between them. Not the statistics you expect from a top three, Premier League-challenging outfit’s attackers.

‘El Matador’, Cavani, could be the latest big-money-man to step onto the pitch at Stamford Bridge, and his signing would certainly delight a great majority of Chelsea fans. His goal-scoring exploits have been well documented, and the Blues were given an example of a damaging, tireless Cavani display in their ultimately successful Champions League second-round tie in 2012.

But if Cavani does make the move to West London, and join-up with Andre Schurrle in what would be a new-look Chelsea attack, there will be no guarantee of success. With a constant reminder of previous failures in this area still embodied by the ever-inconsistent Torres, Blues fans may wait to see whether the goals start flying in before displaying their adoration for the potential new signing.