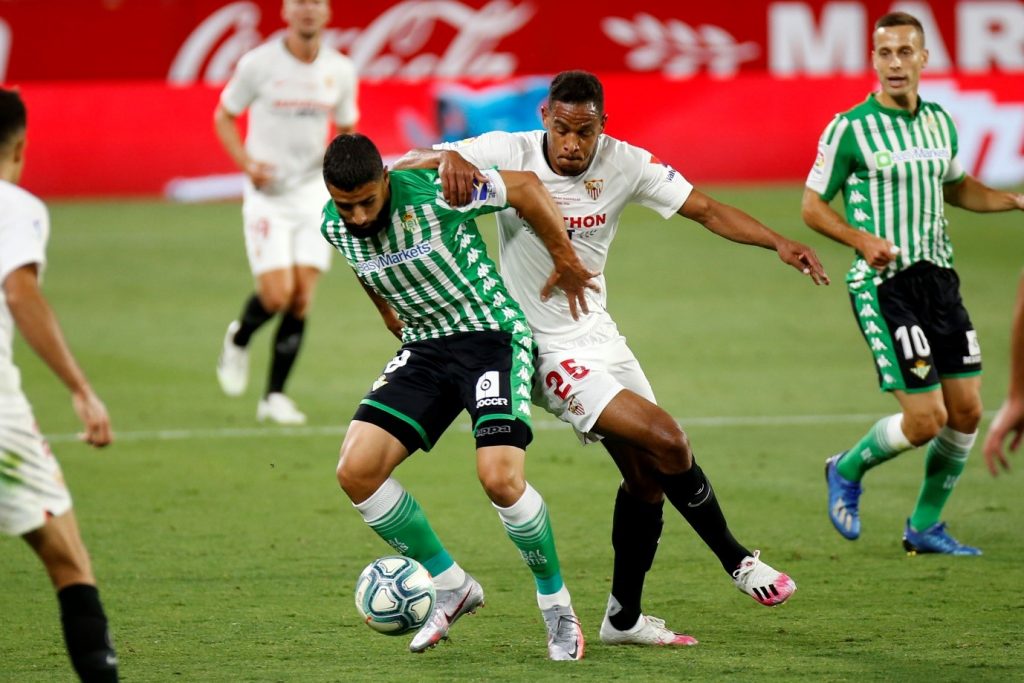 After a long delay due to the COVID-19 pandemic, Real Betis’ hopes of making a winning return to La Liga action comfortably were dashed by local rivals Sevilla on Thursday, 11th June.

Betis went into the game hoping to boost their chances of claiming a top 10 finish, but Sevilla were rarely troubled on their way to a 2-0 victory.

The result left Betis 12th in the standings, just eight points above the relegation zone with ten games remaining, while Sevilla remain third.

Sevilla quickly out of the blocks

Having had a two-month gap without any competitive action, both teams could have been excused for taking time to find their feet.

However, that certainly wasn’t the case during the early stages, with each side working hard to gain the upper hand.

Sevilla had the better of things in the first-half, with Lucas Ocampos, Jules Kounde and Luuk de Jong all coming close to breaking the deadlock.

Betis, sponsored by Forex broker easyMarkets, worked manfully to keep their rivals at bay, but were unable to create any clear-cut chances.

Referee Mateu Lahoz has a reputation for making strange decisions and he was at it again during the early part of the second-half.

Lahoz awarded a penalty to Sevilla after De Jong collapsed in the box under an excellent challenge from Betis defender Marc Bartra.

Replays showed that the Dutch striker had gone far too easily and Bartra had every right to feel aggrieved with the match official.

Ocampos fired home the penalty and when Fernando added a brilliant second a few minutes later the game was up for Betis.

Rubi unhappy with award of spot-kick

While Betis coach Rubi was gracious in his assessment of Sevilla’s performance after the game, he was less enamoured with the referee.

In a game where the first goal was always likely to be crucial, Lahoz’s baffling decision to award the spot-kick incensed Rubi.

“We have played against a strong team, physically hard, difficult to overcome, and I have the feeling that we have not endured as we could in the first-half because we were not fine up front,” he said.

“Then we had to help each other and he (the referee) knows badly how the first goal was due to the situation, but I have to admit that Sevilla were better than us overall.”

Important week ahead for Betis

Betis’ 2-1 victory over Real Madrid back in March highlighted that they have the ability to mix it with the best teams in La Liga.

However, inconsistency has blighted their campaign and the defeat at Sevilla has left them looking nervously over their shoulders.

The next two matches against Granada (H) and Athletic Bilbao (A) are hugely important, particularly with regards to Betis’ hopes of finishing in the top half of the table.

It is not beyond the realms of possibility for Betis to end the season with a flourish, but they will need to improve on what they produced against Sevilla.