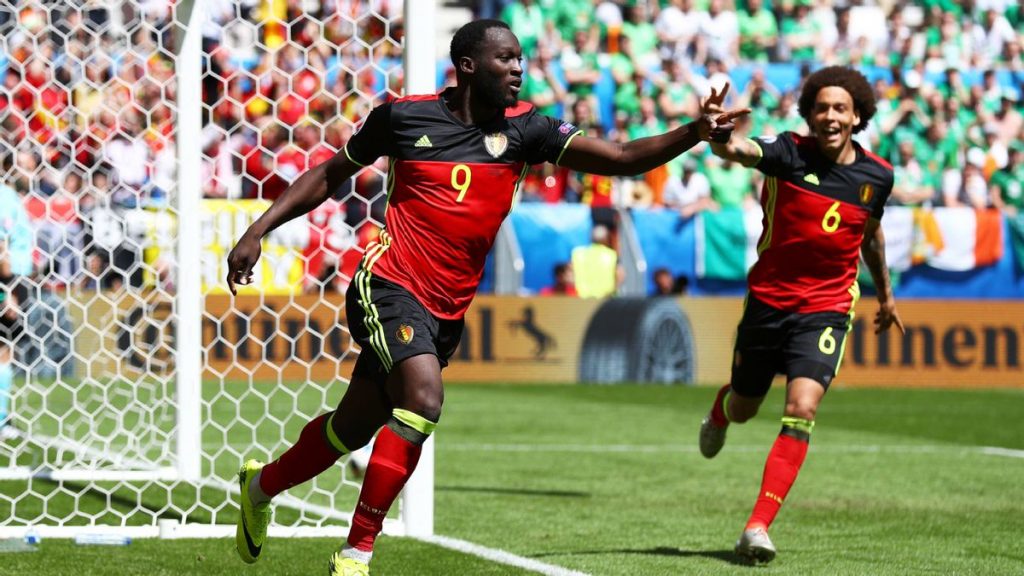 Everton striker Romelu Lukaku scored twice as Belgium picked up their first victory of Euro 2016 with a thumping 3-0 win over Ireland on Saturday.

Marc Wilmots dropped Marouane Fellaini out of the starting line-up with Atletico’s young forward Yannick Carrasco replacing him in the attacking set up behind Lukaku.

Belgium looked sharp and creative with their attacking display but Ireland did enough to keep the scoreline 0-0 at half time.

Just after the break, Lukaku broke the deadlock with a stunning finish with his favourite left foot. Lukaku cleared the ball from just outside Belgium’s penalty box and passed it on to De Bruyne on the right to initiate a counter-attack. The Manchester City midfielder got past the Irish left back with a brilliant skill and passed it on to Lukaku, who made a brilliant run centrally. The Everton striker picks his spot and slots home with great composure to give Belgium the lead.

The Red Devils went 2-0 up soon after when Zenit’s midfielder Axel Witsel found himself in acres of space in the penalty area (shambolic defending from Ireland) and got his name on the scoresheet with a fine header.

I wrote in my daily Euro blog that Belgium’s main problem is their lack of cohesion between the players. They fail to play as a team despite having world class players at almost every position. But when they do play as a unit, they are capable of producing great things. For instance, for the build-up to the second goal, they interchanged 28 passes among themselves, which is the longest build up in a Euro since 1980.

Lukaku, who failed to score in his previous 11 outings for Belgium, scored his second of the day to give Belgium a comfortable 3-0 lead. From a lightning quick counter-attack, Chelsea winger Eden Hazard rushed on to the Ireland penalty area and passed on to Lukaku, who had all the time in the world to gently guide the ball past the Irish goalkeeper.

The Belgium striker enjoyed a brilliant campaign for Everton in 2015/16, but towards the end of the season, his form faded away alarmingly. Many believe that he was distracted with the transfer speculations around him, with his former club Chelsea are reportedly interested in re-signing him this summer. A host of European clubs are vying for his signature, but he wants a return to the Bridge, although Chelsea may need to shell out around £65m for his signature.

Wilmots will be relieved to see his main striker returning to some kind of form, and should Lukaku keeps on producing good performances like this as the tournament progresses, Belgium can expect to mount a serious challenge for the Euro title.