Each year, AC Cugini Scuola Calcio (Football School) takes young players on tours of Italy where they compete against Italian teams. This summer, there will be an added bonus: 5 days with ACF Fiorentina, one of the oldest clubs of the Serie A, and the next opponent of Everton in the UEFA Cup.

AC Cugini is located outside of Washington, D.C. in Northern Virginia. Since 2000, they have been a very positive influence on youth player development. They are the only Italian football school to be officially recognized by the Italian FA (FIGC), along with the Italian Olympic Committee (CONI). The founder of AC Cugini, Fabio Diletti, played goalkeeper for a professional club, Ascoli Calcio.

According to Executive Director, Lisa Cherubini:

“The club recently added a 5-day training camp with world-renowned professional club ACF Fiorentina to our June 2008 tour and tournament play in Italy, at no extra cost to our participants! For those who may not know, ACF Fiorentina plays in Italy’s premier league – Serie A – along with Juventus, Inter, AC Milan. Fiorentina is considered one of the most powerful clubs in the entire world having participated at the top-tier of Italian soccer for the majority of their 82-year existence. In fact, only four clubs have played in more Serie A seasons.” 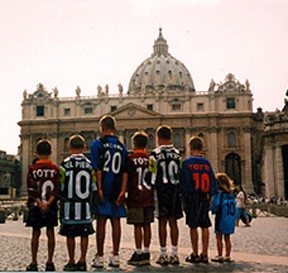 On a personal note, a few years ago, Fabio and Lisa gave an unknown writer his first opportunity at football journalism. Yours truly. They do important work for many children and families. I am very pleased to witness their continued growth as youth player development becomes an important theme in North America.

Steve Amoia is the author and editor and World Football Commentaries, and writes for Soccerlens. He has also contributed to Keeper Skool.