The following article, written by David Rini, discusses a new marketing initiative the MLS tried during the playoffs and how MLS marketing can or can’t affect the identities of the teams in the league.

If you were to go to any home game of Boston’s Major League Soccer team, the New England Revolution, at Gillette Stadium in Foxboro, you’d probably see about 10,000, maybe 12,000 fans. In a stadium the size of Gillette, even a decent number of people can look like a pathetic crowd. When the Revs are playing, the upper decks and large sections behind the goals are closed and the prime seating on either side of the field has a couple of chairs in every row that are unused. At least, that’s the case for most sections, except for 143. 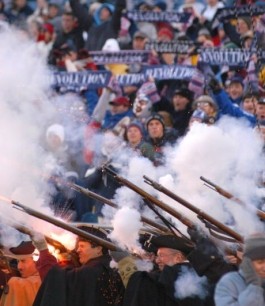 Section 143, also known as “the Fort,” at Gillette, is the home the Midnight Riders, the Revs’ supporters club. Formed from a combination of listserv-groupies, Sam Army (the U.S. national team supporter’s group), and New England soccer nuts, the Midnight Riders have Revs-themed chants, drums, painted faces – pretty much the real soccer fanatic deal, just without any of the hooliganism and racist stuff. They also have one additional perk: men with guns. Whenever the Revs score a home goal, five guys dressed like minutemen fire off muskets in celebration. Badass! None of the other MLS clubs can match it. In fact, the entirety of the New England Revolution franchise was smart enough to capitalize on the region’s ‘revolutionary war’ theme for both the club and the supporter’s organization. Eat that, Barra Brava!

Clearly, when the MLS was created 12 years ago, it attempted to brand the initial franchises with something unique to set them apart. Sad to say, this was difficult for teams like the Tampa Bay Mutiny or the Miami Fusion. What about Tampa Bay screams Mutiny?

One place where this branding worked pretty well, though, was in Boston – we’ve got dibs on the whole ‘revolutionary war’ thing up here, what with actually being the home of Paul Revere, and also the actual location of both Lexington and Concord. So, as far as teams go, the New England Revolution was kind of a no-brainer: tap into the history of the region, even if only to cheesily exploit it; make their colors red, white, and blue and make the team logo a badly pixellated American Flag; and leave any whiff of European soccer influence out by cutting any ‘F.C.s’ or ‘Dinamos’ or ‘Uniteds.’ from the name.

When it started, the only characteristic that set the Revs apart from any of the other teams was that the team played near Boston, and it had a supporters’ club that was loony about New England. But now, 12 years later, instead of just pushing men with guns as our style and flair, the teams of the MLS are slowly trying to create identities for themselves. Taylor Twellman, the Revs’ prolific striker and face of the franchise, starting cementing the Revs’ a few years ago when he arrived in 2002. The man himself is a solid forward -he’s pretty much never scored fewer than 12 goals a season. He’s not particularly fancy, he doesn’t have great technical skills, and he’s not all that fast, either. He does have a rocket for a foot, though, and a good sense of where he needs to be on the field to poach loose balls. His style is representative of the whole team, in a lot of ways, since Steve Nicol took over – straight-forward, efficient, solid. Now, with the Revs booking their plane flight home trophy-less for their third straight appearance in an MLS final, they have one more thing they can add to their emerging character: perennial chokers. 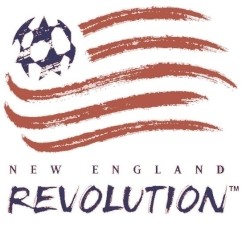 Until 2007, the Revs were consistently one of the best teams in the MLS….except, they never won anything important. They’ve been in five MLS finals, and come out with none. They lost the U.S. Open Cup in 2001 and the Supporter’s Shield in 2005. Finally, this year, the Revs were able to shake off some of that losing mojo by winning the Open Cup against F.C. Dallas. After this season, we’re still the best team in the MLS that hasn’t won a title of any worth.

What will the Revs’ identity be now? How does the marketing of the team and the team’s performance itself combine to create a club’s identity? With the Revs having some of the strongest launch branding in the league, I got to thinking about the role of ‘branding’ in a professional sporting context. In the recent issue of Major League Soccer magazine, there’s a short advertisement/article about a new marketing tool from Adidas, MLS Represent. The overall goal of the campaign is to get each MLS franchise a song from a local artist that can serve as sort of a user-generated content ‘theme song.’ This club-specific anthem was supposed to become the background for a whole host of user-created youtube videos, mash-ups, and other productivity-killing ventures. The music itself was chosen by the music marketing firm Rock River Music (check the case studies section if you want to read more about the MLS Represent), and each band is a local outfit. The short-term goal was driving interest for the playoffs. The long term goal was to start building a franchise identity.

I liked the idea, but I wasn’t sure it would work. The MLS doesn’t have any good local branding yet. Aside from Chivas USA with its attempt to forge a strong hispanic-American identity, pretty much all the other MLS clubs are blank slates. After 12 years, some of them are starting to show a little bit of character – DC United is coming to the top of the pack as the powerhouse franchise (although Houston is now challenging), the Revs are quickly gaining the reputation for being perennial title contenders (and losers), etc. All of those characteristics are representative of the play of the teams on the field – but not of the communities they play for. In only 12 years, the league has already relocated, removed, or added The San Jose Earthquakes, The Dallas Burn, The Miami Fusion, Tampa Bay Mutiny, New York Metro Stars, and Toronto FC. If a team only stays in one place for a few years, it’s hard for fans to develop a relationship with them. On-field performance is one of the few ways teams can stand out, but I don’t think it’s what really separates one team from another.

The song chosen for the Revs is Revolution by the band Damone. I’m not familiar with them, but the song is decent. Apparently, Boston has been chosen as one of the ‘rock’ cities, as opposed to one of the ‘rap’ cities, like Houston (who get Mike Jones). I’m not sure what the criteria were for selecting one band over another. The Revs already play I’m Shipping up to Boston by the Dropkick Murphys when they score, but maybe Dropkick is already identified too closely with Jonathan Papelbon to work for this campaign (up until Sunday, maybe this song would be a better fit, considering the Revs’ season this year?) In any event, the selection does tie the Revs, however shakily, to Boston in more than just name. It ties the team, however poorly, back to the market they call home.

I’m a sucker for Nike and Adidas marketing in general, because it’s pretty and expensive, and because they (Nike especially) usually find a good way to tap into the wonderfully emotional and sentimental part of being a sports fan in their ads. There’s certainly nothing bad that MLS Represent will do to the league. But I do wonder – can you create a club identity? Sure, winning and losing will play a role in whether people view a club as successful or not, but does performance alone generate a team identity? Unless a team is originally founded with a specific charter in mind – that still shows in teams like Celtic F.C. and Athletic Bilbao – what changes a team’s character?

I think of the fans, usually. The fans define a team, more than the team itself does. If Tottenham Hotspur and Ajax define themselves by their fans’ solidarity with Jews, and Chelsea has the (dubious) honor of being known for its hooliganism, then MLS teams can more effectively differentiate themselves with different fan bases. This is precisely what Chivas USA and New York Red Bulls have failed to do with the Hispanic Market. For the Revs, the team’s character has been defined by the Midnight Riders and the fans before the team ever got moving (the Riders were formed in 1995, a year before the MLS launched.) Visit the team’s website, and the only thing you’ll see that has even a remote reference to the theme is the name and logo itself. The Midnight Riders at least have a cool crest with Paul Revere on it. Hard-bitten, jaded New Englanders, a celebration of our small corner of American history, mixed with middle-class Bostonian fervor make for a team that plays a strong, solid, but unimpressive game.

I myself and happy to continue being a Revs fan, content in the knowledge that we have a solid supporter’s group, and a definite character to our games. Other, less organized supporters might bring brass knuckles, pipes, maybe pointy shoes to games if they want to have weapons about them. How many of those low-class hooligans have the balls to bring a seven-foot long musket and the tri-corner hat to go with it?