Wayne Rooney laid down a marker to new manager Louis Van Gaal on Sunday by scoring a brace and assisting the third goal as Manchester United beat AS Roma 3-2 in their pre-season friendly match in Denver.

There have been several rumours stating that Rooney may not be given a major role this season by Van Gaal, who is said to prefer his counterpart Robin Van Persie shouldering the major responsibility up front. But with this performance, Rooney has certainly made a point. With Van Persie yet to return to the squad after the World Cup, the 28 year-old was given the opportunity to lead the line and he certainly made the most of it. To add to his two well-taken goals, Rooney also set up Juan Mata with a fabulous ball over the top from the halfway line. 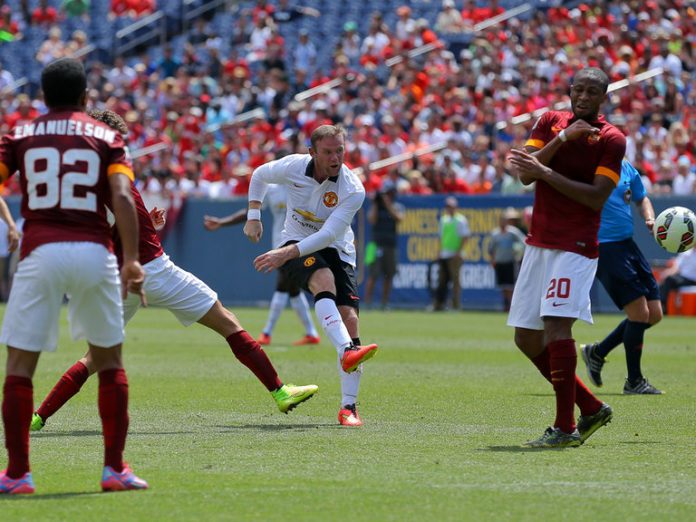 Whether Rooney is a part of Van Gaal’s plans though, still remains to be seen. The striker was seen as an automatic choice to be named captain after Nemanja Vidic’s departure, but there now Van Persie seems to be the favourite to assume that role. Even yesterday, it was Tom Cleverley rather than Rooney who was given the armband. Even though Van Gaal comes with a big reputation behind him, there are sure to be several eyebrows raised were he to ostracise Rooney from the side.

Rooney has been a constant in the Manchester United side over the past decade. Through the highs and lows, the failures and successes, the jubilation and disappointment, the Englishman has been an ever-present at the centre of things at Old Trafford. There have been a couple of occasions when he has swayed, and had his loyalty to the club questioned, but things have always sorted themselves out in the end.

Signed from Everton as a teenager in 2004, Rooney quickly established himself as a regular first-teamer at United, scoring a hattrick on debut against Fenerbahce in Champions League. He led the line and held his own amidst big names around him. He was soon a firm fan-favourite. Season after season, he delivered with incredible consistency.

Often, he was played out-of-position to accommodate others in the side. There were times when he operated wide, and others when he was even deployed as a central midfielder. His versatility helped the likes of Carlos Tevez and Cristiano Ronaldo thrive at Old Trafford. Now, it’s doing the same to Van Persie. With Rooney operating in the free role behind him, the Dutchman has been scoring freely ever since he joined United from Arsenal in the summer of 2012.

There were several stories of Rooney wanting to leave United last summer. Following Sir Alex Ferguson’s departure from the club, there were rumours stating that Rooney was not too impressed by the club’s long-term plans when they employed David Moyes to take over at the helm. Jose Mourinho and Chelsea hounded him all through the transfer window, but he remained a Red Devil. A turbulent campaign followed, with United finishing 7th and failing to qualify for the Champions League for the first time during Rooney’s time at the club. His personal performances though, were once again impressive, as he scored 17  and assisted 10 goals in the league, often winning games single-handedly.

This season though, the problem is slightly different. Rather than Rooney not wanting United, it may be the case of United not wanting Rooney. But he has proven his critics wrong on several occasions and no one would put it past do to it again.