All images courtesy of the Washington Freedom.

One of the seven new franchises for the inaugural season of Women’s Professional Soccer (WPS) will kick off with a nationally televised game at the Los Angeles Sol on 29 March. Fox Soccer Channel will televise a Sunday night game of the week, and the Freedom are scheduled to appear seven times. They may also take part in three double headers with DC United at RFK Stadium. Should agreement be reached, those games will take place on 23 May, 18 July, and 08 August. 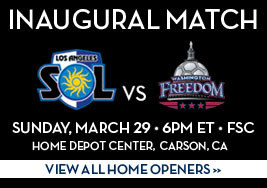 2009 Schedule (Courtesy of the Freedom). 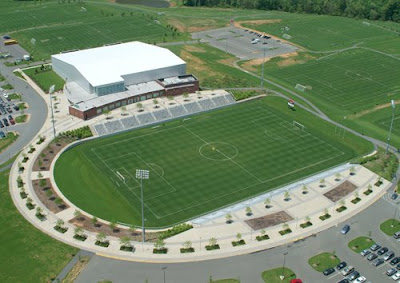 The team will play the majority of its home games at the Maryland SoccerPlex Stadium in Boyds, Maryland. This is a very impressive complex with several training fields and facilities. Stadium capacity is 3,200, and the pitch measures 120 x 80 yards. For a map and directions, please click here.

Jim Gabarra was the original head coach of the Washington Freedom. He lead the team to a WUSA championship in 2003, along with a W-League North American championship in 2007. Coach Gabarra was a very experienced professional soccer player. He played indoor and outdoor soccer, and was a member of both respective US National Teams. In 1983, he played for Team America in Washington, D.C. His wife, Carin, a former stand-out US Women’s National Team player, is the head coach at the Naval Academy in Annapolis, Maryland.

Coach Gabarra is assisted by Clyde Watson, a native of Guyana but with significant experience at youth coaching levels. Coach Watson played for the National Team of Guyana, along with Clemson University. He also coached at the University of the District of Columbia.

Nicci Wright, a former Freedom goalkeeper and team captain, will be the keeper’s coach. Coach Wright had 38 caps for Canada, and also played professionally in Sweden and Canada. She had 11 clean sheets internationally, and remains the only Canadian keeper to beat the US Women’s National team.

The team has a good mix of veteran and younger players. Several are well-known to fans of US and international women’s soccer.

Abby Wambaugh is one of the most experienced and decorated American women players. She is recovering from a seriously fractured leg that kept her out of the 2008 Olympics, and her next goal for the National Team will be #100. She has 127 caps, and was a former Freedom player. She played her college soccer at the University of Florida, and won an Olympic Gold Medal at the 2004 Athens Games.

Brianna Scurry was a prime component in the US National Team pool for many years, and had 167 caps. She played college soccer at the University of Massachusetts, and has featured at several international tournaments. She has won two Olympic Gold Medals (1996 in Atlanta and 2004 in Greece), along with a FIFA World Cup in 1999 at the Rose Bowl in Pasadena, California.

Cat Whitehill has been capped 129 times with 11 goals for the US Women’s National Team. Cat played her college ball at the University of North Carolina, and in 2004, won an Olympic Gold Medal at the Athens Games.

Homare Sawa has been capped 130 times for Japan with 65 goals. She has appeared in two World Cups, along with two Olympic Games for Japan. In 2004, she was named the Asian Football Federation’s Player of the Year.

Sonia Bompastor has been capped 99 times for France, and was a member of the French 2003 FIFA World Cup team.

I asked Jim Higgins, the Communications Manager of the Freedom, to explain the league ownership structure.

“WPS is not structured like MLS. The WUSA was similarly structured to MLS but with WPS, the league is franchised-based and each team is responsible for signing their own players. WPS is similar to NFL, NBA, or MLB in that sense.”

The Freedom is owned by Mrs. Maureen Hendricks, and the President/General Manager is Mr. Joseph Quinn.

I would like to thank Mr. Higgins for his kind assistance with this article.

Among the topics discussed were: