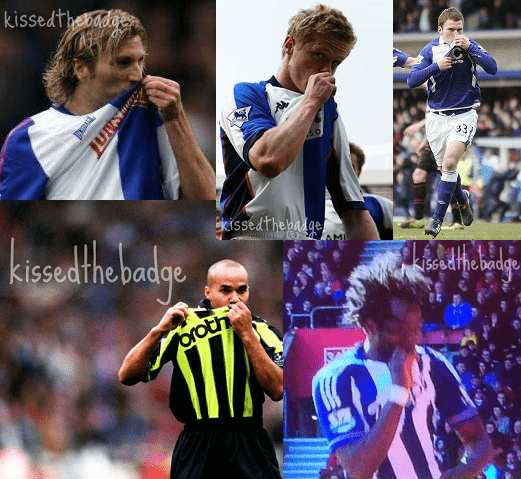 Badge-kissing is a much-abused habit by footballers to endear themselves to fans, but not everyone gets away with it. KissedTheBadge.com takes a look the top (or is that the worst) five badge kissers:

Robbie Savage spent three years in the Midlands before leaving them for Blackburn, claiming he wanted to be closer to his parents in Wrexham.

“My head has been in turmoil in the past four or five weeks,” he said. “I just want to be close to my family. I want to do the best I can for my family. You could not ask for a better group of lads to play with and the fans have been very good to me but it is hard living away from your family. I’ve had a few chats with the manager and, hopefully, it will be resolved soon.”

However, staying at Birmingham would have meant he was closer to his family by a few miles, much to his embarrassment.

“We fully sympathise with Robbie if he needs to be nearer his family home,” said Birmingham owner David Sullivan. “We have offered a chauffeur-driven car to take him to Wrexham any time he wants. But it’s quite amusing to hear Birmingham is closer to Wrexham than Blackburn. Perhaps the answer is for Robbie to move somewhere between Birmingham and Wrexham and spend an hour commuting to training.”

When Savage was confronted with his former fans, who predictably booed and jeered him all game, he kissed Blackburn’s badge. Chants of “one greedy bastard” and “there’s only one John Toshack” could be heard from the away end all afternoon. At the final whistle, after Blackburn had won, Savage sarcastically applauded the Birmingham fans and repeatedly kissed the badge.

“When I signed, David Gold said I was coming to a smaller club,” he said after the game. “Well, that smaller club is eight points clear of the bigger club and that makes me a happy man tonight.”

Richard Edghill kissed Manchester City’s badge after scoring a penalty in their Division 2 play off against Gillingham in 1999.

Edghill joined City’s youth set up in 1988 when he was just 12-years-old and stayed at the club until 2002 when he joined Wigan after being released by the club. He is now a coach for Manchester City soccer schools.

Damien Duff joined Blackburn as a trainee and spent 7 seasons at the club when he kissed the badge after scoring against Charlton. There had been plenty of speculation linking him with a big money move elsewhere but, referring to himself in third person, Duff claimed he would be at the club for years to come.

“It’s all about money at the end of the day with the directors and, as I said, it’s out of my hands,” he said. “With the way the game has gone, I don’t think somebody will pay that sort of money, let alone for Damien Duff. We’ll still be talking about this in five years’ time and I will still be a Blackburn player.”

57 days later he signed for Chelsea.

Gardner – Once a blue, always a blue?

Craig Gardner started his football career at Aston Villa when he was a kid and claimed they were the team he had always supported.

“I signed for Villa when I was 15 and since then these have been the best days of my life,” he said in April 2007. “I’m a Villa fan. I’ve come through the ranks and nothing can be better. I used to be on the Holte End. I was there when we beat Tranmere in the League Cup semi-final. I was at the game when Mark Bosnich saved the penalty and we all ran on to the pitch so it’s come from that. When I was watching Villa as a kid there were people like Garry Parker, Dalian Atkinson and Paul McGrath. They were all brilliant. I used to sing their names and now I look at the crowd and they’re chanting my name so it’s great.”

Then, in January 2010, Birmingham signed him and after claiming to be a lifelong Villa fan, he changed his tune.

“Having played for the Villa everyone thinks I’m a Villa fan but I’m a Bluenose. I have been all my life,” he claimed. “I was a mascot at John Frain’s testimonial. But I don’t have to prove anything to anyone. People who know me, my close friends and family, they all know I’m a Blues fan. As they say: ‘once a blue, always a blue’.”

Once a blue, always a blue… until they get relegated. Then it’s once a blue, now a Mackem.

“It’s unbelievable, to be honest. As soon as I found out Sunderland were interested, it was a no-brainer.”

Lukaku loved it on loan

As a 16-year-old boy, Romelu Lukaku went on a school trip to Stamford Bridge and visit was filmed talking about his feelings for the club.

“What a stadium,” he said. “If one day in my life I will cry, it will be the day I play here. I love Chelsea.”

Two years later, Chelsea spent £18million to sign him from Anderlecht. In his first season he played in 12 games and failed to score a goal. In his second season he was loaned out to West Brom where he scored 17 goals in 38 games.

Towards the end of the season, after scoring against Southampton, Lukaku kissed the West Brom badge.

Find more badge-kissers and footballing hypocrites at Kissed The Badge – you can also follow them on Twitter: @kissedthebadge.