European soccer differs from major professional sports in North America in many ways, but one of the most significant is the way in which players move about from team to team. There is no draft in soccer, there are no trades in the classical sense, and players can move from one league and one country, to another multiple times over the course of their career.

As a result, clubs across Europe must develop their own players through the academy system from a very young age, as well as scour the world for new talents. The global appeal of soccer makes it that players come from far and wide to Spain, Italy and England to play for the top clubs in the world.

The player exchange process in soccer is a rather intricate and complicated one to the average onlooker. Teams negotiate with other clubs, often via agents and middlemen, in an attempt to bring a player from one club to another.

Exorbitant transfer fees are paid in order to secure the services of a given player, and the prominent clubs continue to stockpile talent. But it is in these complex negotiations where a select few yield the power, and their relationships with club executives make these deals possible.

Negotiating a deal between clubs in different cities, countries and continents requires highly skilled individuals with a large network on contacts. But due to the amount of money that is being dealt with and the nature of high power executives, these brokers are often shed in an unflattering light.

Amongst the most prominent middlemen in the sport of soccer are Pini Zahavi and Kia Joorabchian. While they come from very different beginnings and neither are an official agent in Europe, they arguably yield the most power of any men in the world of international soccer.

Zahavi, an Israeli native, has been on the major European scene since the 1980’s, and his power has grown steadily since then. He is now considered the games only super-agent, despite only being officially registered in Israel. But to simply call him an agent would not do justice to the influence that he holds.

He brokered the purchase of Chelsea by Russian billionaire Roman Abromonovich in 2003 as well as the takeover of Portsmouth by Sacha Gaydamak in 2006. So Zahavi not only deals with massive transfer deals, such as that of Rio Ferdinand, Didier Drogba and Petr Cech, he deals on the much larger scale with businessmen from around the globe who are attempting to gain entry into the lucrative world of European soccer.

One of the men that he has done extensive business dealings with is the Iranian born Joorabchian. While generally referred to as an agent, he is not registered as such, as instead acts as more of a middleman during negotiations, rather than an official representative of a given player. 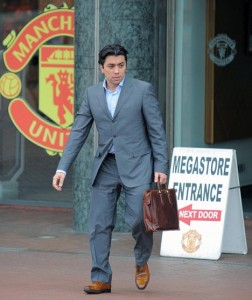 Joorabchian has also been at the forefront of the controversy surrounding third-party player ownership, whereby the rights to a player are not owned by a team, but rather a separate party.

In 2004, Joorabchian founded Media Sports Investments (MSI), to take over the Brazilian club Corinthian’s at the suggestion of Zahavi. Third-party ownership in South American soccer has been prominent for years, as clubs who are unable to afford the cost of bringing in players rely on outside parties for financial assistance.

Through MSI, Joorabchian was able to broker the deals of Carlos Tevez and Javier Mascherano from Corinthians to West Ham United.

These deals brought the use of third-party ownership to the forefront of the discussions throughout Europe, as this was the first that an English club had been exposed to such dealings. The defenders of such ownership tactics state that it gives smaller clubs the chance of acquiring major talents from around the world at a reduced cost, and it also limits the financial responsibility if the player does not live up to their potential.

But there is the belief by some that this practice is essentially the exchange of human beings, and furthermore that it is destabilizing for outsiders to hold controlling interest of athletes.

As a result of the disapproval of third-party ownership, the English Premier League took the step of outlawing such involvement in 2008, and FIFA was taking steps towards outlawing it on an international scale. But despite such attempts, it is believed that Joorabchian owns the economic rights to between 60 and 70 players across South America and Europe, and his name continues to surface during the transfer window when major negotiations are taking place.

The most recent case was Brazilian midfielder Ramires, who was player for Portuguese side Benfica.  It was believed that Joorabchian owned a 50% stake in Ramires and Zahavi owned a further 30%. So when the Brazilian finalized his move to Chelsea recently for a fee of 17 million pounds, Zoorabchian and Zahavi made an astronomical sum.

One can understand the disgust that some purists have with such dealings, as the two men that made away with millions off of the Ramires transfer essentially nurtured the deal with Benfica President Luis Felipe Viera a year prior when Ramires was acquired from the Brazilian club Cruzeiro.

It does seem as if these individuals peddle human beings from small clubs around the world to the major clubs in Europe, in return for their enormous share of transfer fees. But it is a necessary evil that must be completed by someone in the global game that soccer has become.

If you look at the roster of any major club in Europe, there are players from around the world that make up the squad. While in an ideal world, each individual club would be able to scour the world for the top talent, but they simply do not have the resources to do so. As a result, third-parties enter the picture and aid not only with the recruitment of players to top clubs, but also their training needs while they are developing.

Many players in South America and Africa do not have the means to access training facilities on their own, and must rely on the help of outsiders. This is where figures such as Zahavi and Joorabchian enter the picture and make themselves valuable. They, or their associates, travel the world in search of the next great talent.

While they are doing so for selfish reasons, it is only taking place due to the conditions that the system has set in place.

Soccer, of futbol to most of the world, is the only truly global sport. You can find people playing it in every country around the world, and as a result, highly skilled players are being developed in some of the most unlikely places. These talents must be nurtured and developed if they are to reach the next level, and individual clubs can only do so much.

No matter what steps La Liga and Serie A take to combat third-party ownership, and despite the ban of such practices that the Premier League handed down, these relationships will continue to exist if European soccer is to remain successful. No amount of regulation can prevent these power brokers from practicing their craft, and no matter what league officials will lead you to believe, it is better for the game to operate in the way that it does rather than making new rules which are sure to be broken.