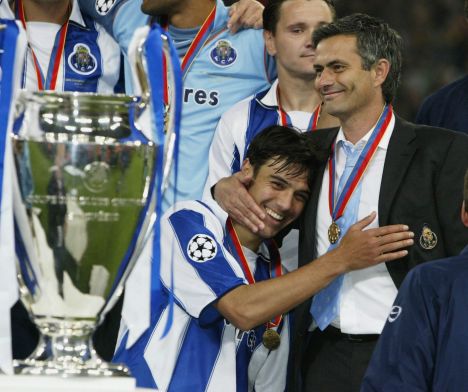 As Schalke gears up for arguably the biggest game in their history against Manchester United in the UEFA Champions League semi-final on Tuesday night, their passage to the last-four brings back memories of that telling year of 2004 where the underdogs reigned supreme.

As Europe’s elite fell like a stack of dominoes during that frantic campaign, it was left to the likes of Deportivo La Coruna, AS Monaco and eventual winners FC Porto to light up Europe and shake the very foundations of the continent itself.

Perhaps it was fate that such unpredictability occurred. UEFA had undergone a huge renovation project on the tournament with a new image and structure – reminiscent of the old European Cup. The first group phase remained but the second was abolished in place of straight knockout football and it played havoc with a series of Europe’s elite falling at what seemed unmissable hurdles. The group stage even racked up a surprise or two with most notably Internazionale failing to qualify as well as succumbing to a 3-0 hammering at the hands of Lokomotiv Moscow and then ultimately put to the sword by the Arsenal Invincibles 1-5 at the San Siro. Monaco and Deportivo La Coruna played out a sensational 8-3 thriller at the Stade Louis II which set the record of most goals scored in a match within the Champions League era. Chelsea were in their inaugural campaign under the ownership of Roman Abramovich and his millions of pounds contributed to Lazio’s downfall at the Stadio Olimpico as The Blues ran riot in a 0-4 romp of the Aquile. Not to mention Celta Vigo, who not only qualified for the last-sixteen, but also left the San Siro with a 1-2 victory over the mighty AC Milan.

It certainly whet the appetite for the knockout phase with the spotlight now hovering over a few unfamiliar names. Monaco’s Ludovic Giuly was becoming renowned for his artistry like flair on the ball with the capabilities to weave his way into pockets of space and haggle opposition defences. Juan Carlos Valeron of Deportivo was showing all his potential as Los Turcos were on the brink of immortality. The humble names of Portuguese football such as Costinha, Paulo Ferreira and Ricardo Carvalho were coming to the fore with their efficiency. Not forgetting a certain Brazilian born Deco who was the heartbeat of the Dragons. Much like Giuly, he also presented the figure of a small stocky midfield man with bullish strength and the ability to open back lines with precise passing and diligent movement.

Without doubt one man, who broke from the realms of potential talent to superstar in the space of three months, was Jose Mourinho. Head Coach at Porto, he masterminded their assault on Europe’s biggest prize. Never in a million years could anybody outside the walls of the Estadio do Dragao envisage what was to occur in the build up to that night in Gelsenkirchen, but Mourinho. He had already led them to domestic and European glory with the capturing of the UEFA Cup the previous season, but to be able to overcome the stranglehold of Europe’s most dominant entities in club football’s biggest tournament looked impossible. However, this was Jose Mourinho and we had yet to get to know him.

It was Costinha’s 90th minute equaliser against Manchester United in their second-leg of the last-sixteen that introduced Mourinho and his side to the eyes of the watching world. Benni McCarthy’s brace two weeks prior gave the Portuguese a 2-1 win going into the return leg in which Paul Scholes thought he had done enough. Not only did he tie up the leg on aggregate, he had a goal chalked of for offside when in actual fact, he was miles on. Fate perhaps for Mourinho? He certainly thought so as he galloped down the touchline to celebrate with his players as Costinha’s converted rebound from Tim Howard’s save sent them into the last-eight.

Meanwhile Juventus, Scudetto holders were eliminated by Javier Irureta’s Deportivo. A 1-0 victory was impressive enough but they replicated that feat in Turin to send ripples across Europe. The runners-up of the competition the previous campaign were left dumbstruck.

Champions League holders and Italy’s remaining entity came face to face with Juve’s conquerors in the quarter-final and produced one of the most startling ties in European football history. The Rossoneri absolutely coasted their first-leg encounter despite going a goal down to a Walter Pandiani strike as Andriy Shevchenko, Andrea Pirlo and a brace from Kaka looked to have put the tie beyond all doubt. Obviously Milan Coach Carlo Ancelotti must have misplaced his script as the modest Spaniards produced a fruitful display of never say die and reaped the rewards. They not only kept the Italian’s spearhead from slaying their defence, but amazingly obliterated Dida’s onion bag with four goals to put them through 5-4 on aggregate. The usually composed Alessandro Nesta was easily brushed aside by Albert Luque for Depor’s third and their desperation was compounded by substitute Fran who capitalised on a mistake by Gennaro Gattuso and saw his deflected effort ripple Dida’s net. Not even Manuel Rui Costa’s terrific effort in the dying embers could find the net and save Milan’s blushes.

That result overshadowed Monaco’s heroics against the favourites Real Madrid to overturn a two goal deficit and progress to the semi-final. Los Blancos were in scintillating form at the Bernabeu in the opening leg as they clocked up a three goal margin with ten minutes remaining. Fernando Morientes was sent out on loan by Madrid to the French outfit and amazingly scored a vital second for the Ligue 1 side as the game drew to a close in the 4-2 loss. At what was perceived as a mere consolation goal, turned out to be vital. Raul put Real ahead in the return leg and it looked for all the world that Monaco were done. However, those in red and white conjured up three goals, with a brace coming from the excellence of Giuly as he sparkled on the biggest stage. Morientes got himself on the score-sheet again and how his employers rued the decision to let him leave. He came back to haunt them which led to a six year plague at the club as they failed to make it past the last-sixteen.

Deportivo and Porto’s meeting in the semi-final meant at least one perceived underdog would light up the lights of the Veltins Arena on May 26th, presenting a new name to the Champions League era’s possible roll of honour. Derlei’s spot-kick at the Riazor was enough to ensure Porto’s passage where as Monaco overcame a Chelsea side littered with million pounds worth of talent to book their ticket to Germany.

Porto vs Monaco would be the inaugural meeting of the two in such a finale. At the start of the competition, the predictability of the two clubs meeting in the last-two was so off the mark, it was not even contemplated. Porto ran out 3-0 winners and picked up their second European Cup as Jose Mourinho ushered his way down the tunnel and made his way to England.

It was perhaps the most unpredictable Champions League since its transition from the European Champions Cup. It was a year where the so called ‘unfashionable’ clubs, stole the march on their bigger counterparts. Had Costinha not netted that 90th minute winner against United, where would Jose Mourinho and his Porto side be now? Had Fernando Morientes not been loaned out by Real Madrid, would Monaco have made it to the final? And would Real have been in their place? Hindsight is a wonderful thing, but there is no denying the year 2004 was a defining year for many within European football.

To top it off, Greece won the European Championship that summer. Who said football was predictable?