India
Home News the most famous cow in football

No, we’re not talking about WAGs here, let’s get things straight right away. 🙂

What is the latest invention of the world of soccer for making money? In the Iberian peninsula, the game is called “Caca de la vaca“. For those familiar just a bit with the Spanish language, you’ve already got the picture of what we’re talking about, and it wouldn’t be too much of a stretch to think something about luck is involved. You know, the stepping-into-with-your-left-foot kind of thing. Okay, a few more clues: the idea is the initiative of the president of a Spanish amateur club, the club’s name is Amoeiro, and Amoeiro is indebted for large sums of money.

Still no clue? Here I’ll give you the answer: it’s a lottery designed to bring money into the club’s finances. But how? And why on earth is cow manure involved? 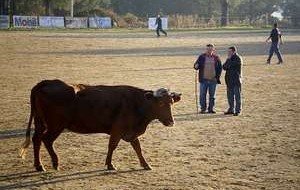 Here’s how it works. Club president José Angel Cid, divided the Amoeiro home stadium in 6,000 square pieces, each measuring 1 m2 in size. Each piece of grass is on sale on the official website of the lottery (cacadelavaca.es) for the bargain price of â‚¬10.00. If you’re an Amoeiro supporter, you should be ready to spend this much and more to help out your club. Then, the end of next month (on February 24 to be exact), will see the entrance of Rubia. Who’s Rubia might you ask? Rubia, is quite simply the cow aspiring to become the most famous bovine of the beautiful game. 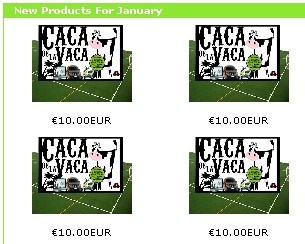 At noon on February 24, Rubia will be accompanied out of the fence where she’s currently living (close by the Penafita stadium, home of Amoeiro), and be brought onto the field of play. After which, she will be let loose on the grass, free to do what cows normally do. You know… eating grass, ruminating, and… well… the obvious after a good digestion. That’s where the lottery comes into play. You see, for every square piece which Rubia “fertilizes”, a lucky person will win a nice little prize. Well little not so much, because prizes range from a two-person dinner to restaurant “A adega do Emilio” in Ourense, to stuff like a scooter, a big screen TV, a trip for two to the Canary islands, to the grand prize of a Seat Leon Sportline 1.9 TDI.

In other words 6 prizes in total for 6 lucky winners, just to confirm the idea that “la caca” brings good fortune, even if you’re not stepping into it with your left foot. Those who are interested in taking a chance hurry up, all the little squares have almost sold out. 🙂