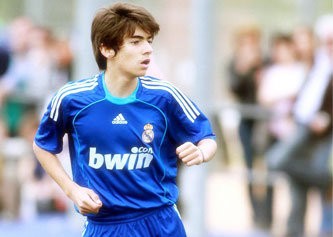 He might still go to school and study like most normal children at the age of 15, but there seems to be very little else ‘normal’ about the early teenage years of Enzo Zidane. Son to the France and Real Madrid legend, Zinedine Zidane, young Enzo hasn’t even hit the grand-old age of 16 and already he is a regular star in the Madrid youth teams, where he continues to display footwork and skill reminiscent of his father.

Whilst his club future looks to be very much set in stone though, there is a very different story on the international front, where the 15-year-old is threatening to cause something of an international crisis.

First there were reports earlier this week that the youngster could be called up to play for one of the French youth teams, perhaps the Under-17’s, and then as if to counter those reports, the Spanish decided that they would make their feelings public.

“We’re going to call him up for Spain. We intend to speak with his father and call him up in October.”

That was the clear statement from Gines Melendez, the coach of Spain’s Under-17 squad.

As of yet there has not been clarification either way from Enzo or his father and it looks very much like they are ready to leave it until the last minute to decide which color the youngster will wear; red or blue.

Enzo himself was born in Spain and has been raised in the Spanish capital whilst he has worked his way up through the Real Madrid ranks. Nevertheless, the fact his father is one of the greatest players ever produced by France meant this toing and froing between the two countries was always going to be inevitable.

As for Zinedine himself, he has been very coy on the subject and has refused to show any preference either way, stating only that his son is enjoying his football with Madrid at the moment.

“Nothing has been decided. To date, Enzo has not yet been selected by Spain nor France. And I think it’s better that way… If Spain called him, it will be good, and if it is France, it will be good too… For now he enjoys football with Real Madrid, that’s the most important.”

Whilst a decision to play for either Spain or France at Under-17 level would not officially rule him out of playing for the other country in the future, it is expected that his first choice is likely to be his final one. With Melendez stating that he is set to call-up Enzo as soon as October, this could potentially mean his future will be decided soon; judging on whether or not he decides to play for Spain or perhaps turns them down.

The decision will no doubt be a tricky one for both Enzo and his father and even more so considering the fact that behind the eldest son there are two more boys, Luca and Theo, both of whom would presumably follow in the footsteps of their big brother.