It’s entirely fitting that the fight for fourth place has culminated in what will essentially be a cup final in form and function – the race has been hard-fought and full of twists and turns, with both City and Spurs more than deserving the chance to engage in this jackpot skirmish.

It’s a shame Liverpool were so lacklustre and Villa fell so late, but in reality, whatever the kvetches of Martin O’Neill and Rafa Benitez, their league positions are merited.

It would be false and too easy to label Tottenham the club of moral virtue pitted against the oil tainted riches of Manchester City and their benefactors; for Spurs too, have spent their money. Over the past year and a half, the club have bankrolled £150 million of signings, which, even allowing for expensive sales such as Dimitar Berbatov and Michael Carrick, amounts to a staggering investment, and outstrips last season’s top four.

For sure, the amount spurs has spent has been dwarfed by the extravagance of Manchester City. This is a club who allowed the £34 million man Robinho to go out on loan, and have a £20 million signing, Roque Santa Cruz, who rarely, even when fit, makes the first team.

Yet one of the reasons Tottenham have done so well this season, in stark contrast to Liverpool and Villa, has been the size and quality of their squad. They have had bad injuries, over different periods of the season, to key players such as Aaron Lennon, Jermaine Defoe, and Luka Modric, whilst Ledley King can only play once a week due to a chronic meniscus injury, and Jonathan Woodgate – remember him? – has had another year where he has not kicked a ball.

The signings of Wilson Palacios and Sebastian Bassong last year were crucial, for they helped toughen Tottenham’s spine up. Bassong is a rarity in football; a central defender who left Newcastle United with his reputation not just intact, but amplified.

His partnership with Michael Dawson, a talented, blood and guts defender who has now added consistency to his game, has been a foundation for the club for much of the season, particularly whenever the immense Ledley King has not made the side.

If King were fully fit, you’d have a good case for saying that he and Michael Dawson should be first choice for England at the upcoming World Cup. For alongside Daniel Agger, Nemanja Vidic, Thomas Vermaelen, Richard Dunne and James Collins, they have been the best defenders in the country all season.

Man City in comparison, have no standout central defender and have rarely evinced a similar solidity at the back, despite spending £36 million on Joleon Lescott and Kolo Toure. The signing of Lescott particularly looks injudicious in light of Richard Dunne’s season at Villa.

Indeed, much of the reason they have endured over the course of the season has to do with the goal scoring excellence of Carlos Tevez, the reliability of Shay Given, and the energy of Nigel de Jong – a true powerhouse in front of the back four who covers so much ground City can get away with playing Patrick Vieira in a four four two. 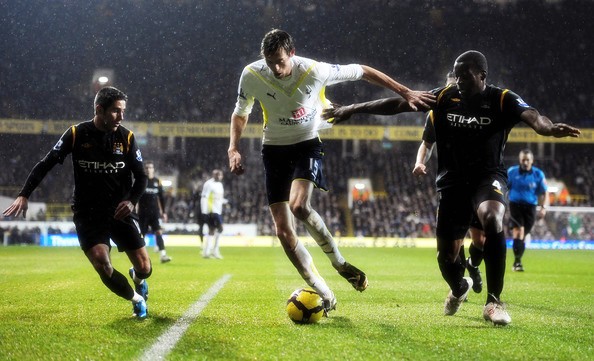 Vieira was bought primarily in the interests of team spirit and experience, which at least shows the club know their football history enough to eschew the star obsessed mantra implemented by Real Madrid. The most successful sides are built upon a successful blend of flair, steel, and a social harmony that allows for the formation a team above and beyond the mere sum of its parts.

In this, Tottenham have had an advantage over Manchester City; a core of young British players have remained intact at the club since being bought under the auspices of Martin Jol in what was, at the time, a clearly defined, and well thought out plan for the future. These players then survived the turbulence that characterised Juande Ramo’s tenure.

But City deserve some credit for constructing a team that has recovered from a variety of setbacks throughout the course of the season to mount a challenge for fourth. The loss of Mark Hughes in acrimonious circumstances did not derail the club, save for the eventual exclusion of Robinho – the first in a succession of players who have grumbled at the double training sessions implemented by Roberto Mancini.

Their recent formation change from what became a negative four four two was crucial because previously, in marked contrast with Spurs, they struggled with balance and ball retention.

Central to their four four two system and end of season charge, has been the recruitment of Adam Johnson in January, an area again, where Tottenham excelled, by signing Eidur Gudjohnsen from Monaco, and re-signing Younes Kaboul from Portsmouth. It’s notable that Liverpool did very little in the transfer window, and Villa nothing at all.

The purchase of Adam Johnson could prove to be among the most significant of any team this year. It certainly will be if they beat Spurs tomorrow night. In his 14 league starts, he has scored 1 goal and managed 8 assists, a remarkable return – and his dynamism has helped win them games, much in the way Gareth Bale’s emergence as helped spark Spurs’ push.

In fact you’d be hard pressed to find two better players in the second half of the season, and Johnson must surely get a look in for England.

Over the course of the season, Tottenham have had the more impressive results and looked a more unified club than Man City, where even now players are complaining about the manager.

Aside from the superfluity of anybody making value judgments as to who deserves fourth, it is far more instructive to think what it might do to the future of the league – for if Manchester City get to the Champions League and spend accordingly, we could end up in a situation where the league loses some of its newfound unpredictability.

But if Spurs do, and City spend to compete, and Liverpool endeavour to get back in the mix, and furthermore Villa improve, we could end up with a league even more capricious and thrilling. In any case, City’s spending will eventually see a proliferation of talented cast-offs at teams lower down the table, which in the long term, can only improve the quality of the Premier League.

For tomorrow’s match then, let’s hope Tottenham get a result, but not begrudge Manchester City any success.

Adrian Clarke and Iain Spragg discuss City v Spurs and how each club would deal with qualifying for the Champions League. Listen now.