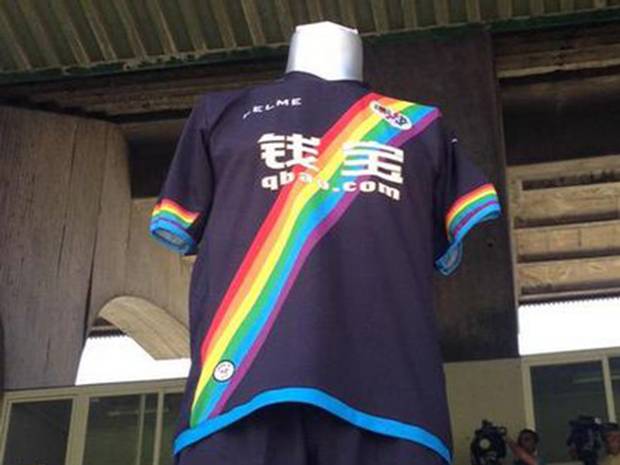 You can love them for the perennial punching-above-their-weight and €160 season-tickets, you can love them for saving an 85 year-old widow from homelessness, you can love them for their three-sided tiny ground that is overlooked by a block of flats in a working-class barrio with a real sense of community, you can love their fearless attacking style and eccentric manager Paco Jemez with his elbow patches, pink shirts, purple ties and quotes like “We’re the shittiest team in the league and unless we realise that we will suffer”, “If, as well as being small, you’re a coward, you’re going to get a beating from all sides” and “The people who say we’re dead turn me on.” On the release of their new away kit, Rayo Vallecano have given us seven new reasons to love them.

The new away jersey is now black featuring a rainbow stripe with seven different colours, each representing a different social cause in solidarity with the least privileged people in society. The most obvious show of support is to the LGBT community with the rainbow flag; the other colours represent:

Orange for people fighting for rights of disabled people

Yellow for people “who refuse to lose hope” (mental illness, depression and those in need)

Pink for victims of domestic and gender violence

“The rainbow flag is going to fight against homophobia. We will wear it proudly. You can also see a series of ribbons, each representing a cause”, said club President Raul Martin Presa, confirming that for each shirt sold seven euros will go to one of the seven organisations. The third club strip will have a solid pink diagonal stripe with a pink ribbon incorporated in support of  breast cancer sufferers. “We want to take a stand and we want it to be right. We are a club which is very close to the people, it is something carried in the DNA of the club and its fans: they give their all and they fight for a fairer world”.

In terms of revenue Rayo Vallecano may be way behind their neighbours Real and Atletico Madrid, last season their first team cost a total of €0, but in solidarity and community togetherness these barrio boys are streets ahead.