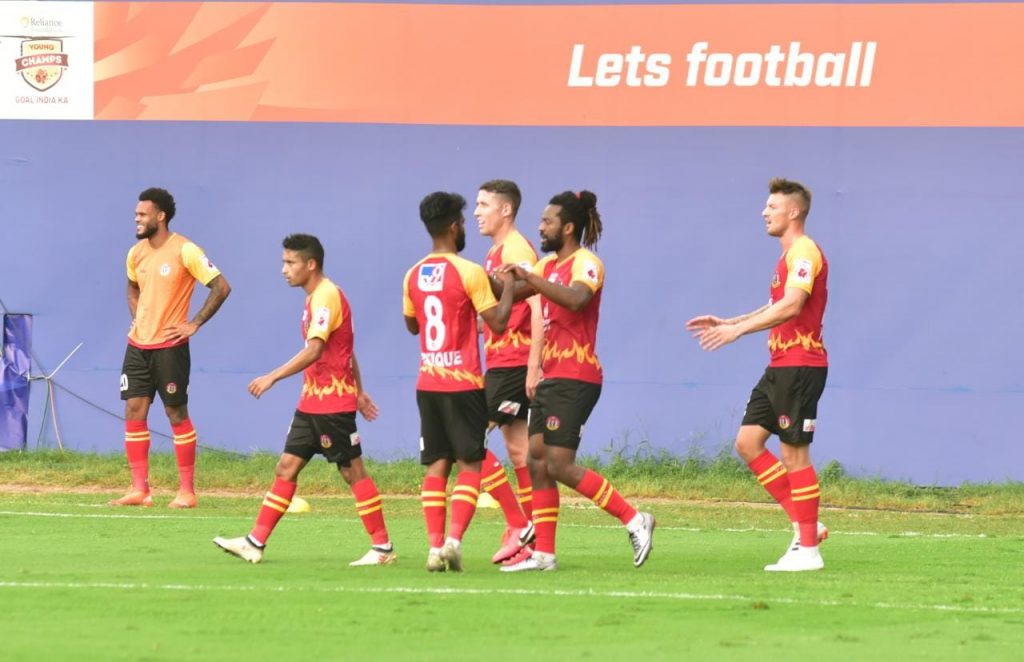 The final clash of the Indian Super League’s matchday 9 saw the two lowest-placed clubs go head-to-head. 10th-placed SC East Bengal, who had drawn their last two matches but let a win slip away in stoppage-time in one of them, faced Odisha FC, who had also come away with a point from their last clash. The only two winless sides of the season were set to battle, so this was certainly going to be a very interesting fixture:

East Bengal started off brightly and even took the lead in the 12th minute when Raju Gaikwad’s long throw evaded everyone in the box and reached Anthony Pilkington, who headed home from close proximity.

Odisha came close to equalising four minutes later when Manuel Onwu headed Hendry Antonay’s cross towards the bottom corner, but it was clawed away by Debjit Majumdar. Another four minutes later, Diego Maurício headed Steven Taylor’s header down at the edge of the six-yard box, but Majumdar was equal to it once again as he pushed it away from the top corner. Maurício had another good chance to score in the 22nd minute when he benefitted off a mistake from Milan Singh and had time to pick his spot from the edge of the box, but he missed wide of the far post. East Bengal came agonisingly close to doubling their lead in the 29th minute when Anthony Pilkington cut inside from the left and let fly, but his shot took a deflection and bounced back out off the far post. 10 minutes later, however, there was no obstruction from the woodwork, as Jacques Maghoma burst up the left, decided to go wide to the byline and smashed the ball into the near top corner with some help from the post.

Just two minutes into the second half, Jerry Mawihmingthanga got up the left flank and rolled the ball across to Diego Maurício, whose deflected effort just went wide of the bottom corner. Odisha FC next big chance came in the 57th minute when Jerry delivered a low cross from the left and it was met by Manuel Onwu, whose poked effort spun back out off the post. The Kalinga Warriors continued to threaten just after the hour-mark when Jacob Tratt headed a free-kick into the ground and towards goal, but it too struck the crossbar and came back out.
Comment from discussion TheReal_BlueBoi’s comment from discussion "[Match Thread] SC East Bengal vs Odisha FC".
Odisha came close to scoring yet again in the 77th minute when Diego Maurício cut inside from the left and looked to pick out the near corner, but his shot was blocked away for a corner. Nine minutes later, Maurício got forward on the right chipped the ball across the face of goal for Daniel Lalhlimpuia, who was stretching and couldn’t control his effort. It was East Bengal who got the next goal, however, as Bright Enobakhare made it 3-0 in. First, Wahengbam Angousana headed the ball down in the box for the new signing who smashed the ball towards goal, but it was saved by Arshdeep Singh. The ball only fell to Surchandra Singh, though, who pulled it back to Enobakhare in the middle of the box. This time, the ex-Wolves man elected to place it into the bottom corner, and he succeeded.

Fun fact: other team from KOLKATA has never scored 3 goals in a match 😉

Three minutes later, Angousana let fly from the edge of the box, but he just missed wide. In stoppage-time, Odisha FC finally got a goal as Diego Maurício bundled it home after the ball was fizzed into him from the right, but it didn’t really matter as his side lost 3-1.

It’s been a long time coming, but finally, SC East Bengal have won an ISL match. After some disappointing performances in the first few matches and that late heartbreak against Kerala Blasters, everyone felt that it was only a matter of time before East Bengal managed to hold on to a lead for the full 90 minutes. They finally did that tonight, and although their performance wasn’t entirely outstanding, it doesn’t matter as long as the points are in the bag. The Red and Gold Brigade started the match well and deservedly took the lead through Anthony Pilkington in the 11th minute. Debjit Majumdar did have a bit off work to do to preserve that advantage and Odisha didn’t help themselves either, but East Bengal certainly did well to go and get a second thereafter. Their set-piece defending was no good, however, and in the second period, they were riding their luck a lot, but for once, they had some of it. Late on, new signing Bright Enobakhare got a goal too to cap off a great display.

This undoubtedly is one of the biggest wins East Bengal have had in a long time, but can they build on it?

Jacques Maghoma’s tally of two was matched by Matti Steinmann last time out, so he went and scored again to reclaim his spot as East Bengal’s outright top-scorer this season. The Congolese international did so with a great strike as he covered a lot of ground on the left after beating a couple of defenders and fired his shot onto the top corner with great power and precision. He was very lively throughout the match, as he proved to be a great outlet for his side on the left flank.

The 33-year-old he completed 6/6 dribbles, got 36 touches, maintained a passing accuracy of 89%, made a couple of key passes and won 4 free-kicks. A superb showing to seal a crucial win for his side.

Odisha FC were winless after playing seven games this season, and they weren’t going to get a better chance of ending that record when they faced fellow-strugglers SC East Bengal. Stuart Baxter went for an unchanged lineup after that encouraging draw against NorthEast United, so Marcelinho didn’t start yet again. Creativity wasn’t their issue, however, it was their finishing that hurt them. The first bit of damage that they sustained, however, was at their end, when they let a long throw breach their defences. The Kalinga Warriors dominated the second half, but the woodwork denied them on multiple occasions and their finishing was a bit poor at times too. However, it certainly must have been encouraging to see them dominate proceedings for once, but Arshdeep Singh conceded again in the 88th minute. They did get some late consolation, but it counts for nothing. This was perhaps the last chance of the season that Odisha could afford to miss, so surely their playoff hopes have crashed down for good now.

SC East Bengal stay 10th but only on goal difference thanks to Jacques Maghoma’s third goal of the season and Anthony Pilkington and Bright Enobakhare’s respective account-openers, while Odisha stay rooted to the bottom. Diego Maurício’s late strike was the 100th goal of this ISL season.