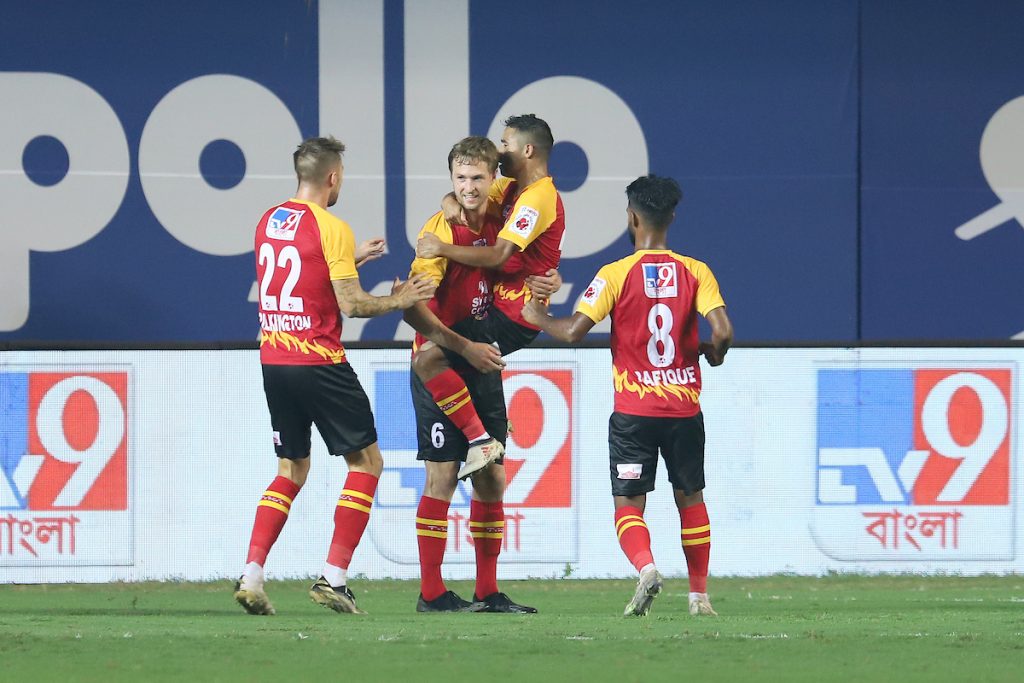 After a couple of days of festivities, the Indian Super League was back with an intriguing Boxing Day battle. Bottom-club SC East Bengal took on 8th-placed Chennaiyin FC, with both sides having sub-par season up to this point. A win was necessary for either party, but at least one was sure to be disappointed. A feisty clash ensued, and here’s what we made of it:

East Bengal looked fairly competitive in the opening stages, but it was Chennaiyin FC who drew first blood in the 13th minute as Jakub Sylvestr played Lallianzuala Chhangte in behind the defence around the halfway line. The pacy winger only had Debjit Majumdar to beat, and he successfully did so by slotting below the keeper just as he dived to prevent him from scoring.

There was a huge chance for an equaliser in the 37th minute when Matti Steinmann chipped the ball over the Chennaiyin FC defence for Mohammed Rafique, who went around the rushing Vishal Kaith, but failed to get a shot away with an open goal at his mercy as Deepak Tangri made a last-ditch challenge. East Bengal finally got an equaliser in the 59th minute, as Matti Steinmann flicked a corner on with his head, and it clipped the far post before hitting the back of the net. https://twitter.com/QEBNA/status/1342852595677876225 In less than five minutes, however, Jakub Sylvestr played Rahim Ali through on the right. The youngster stepped across Bikash Jairu before slotting home calmly. https://twitter.com/orangelays/status/1342853988195180545 Soon thereafter, Sylvestr brilliantly controlled the ball at the edge of the box and let fly from the edge of the box, but Debjit Majumdar was equal to his effort as he tipped it wide. Enes Sipović headed the resultant corner, but his effort only hit the crossbar. There was yet more drama in the 68th minute, as Vishal Kaith failed to catch Danny Fox’s looping header after a corner, and Matti Steinmann picked up the scraps to equalise once again. https://twitter.com/ArpanRicko/status/1342855125509926912 Two minutes later, the ball broke for Jacques Maghoma on the left of the box. The winger created a bit of space for himself and let fly, but only managed to hit the side-netting. In the 77th minute, a slick counterattack by Chennaiyin FC led to Lallianzuala Chhangte pulling the ball back for Jakub Sylvestr, whose shot was well-saved by Vishal Kaith. Two minutes later, Milan Singh presented a brilliant chance to Sylvestr with a terribly-weighted pass, but the striker failed to hit the target. The Slovakian forward continued to miss great chances in the 89th minute when he somehow glanced Rahim Ali’s cross wide of the far post. Up at the other end, Scott Neville had a free header from four yards out following a corner, but he put it high. Neither side could find a late winner, so the match ended in a thoroughly entertaining 2-2 draw.

This has been said many times in the last few weeks, but surely, this was a must-win for SC East Bengal. The Red and Gold Brigade looked to be the better side in the opening stages of the first half, but they characteristically conceded after a strong start to undo all of their good work. Things could certainly have been worse soon thereafter, but East Bengal missed a couple of glorious chances to equalise before the break. However, Chennaiyin didn’t take theirs either, so the second half was certainly an open affair. With goals being the top priority for Robbie Fowler’s men, the British manager made a few half-time changes in his system. It must have been a great relief to see Matti Steinmann of all people chip in with a brace, but the defence didn’t hold up well again meaning that East Bengal never had a lead.

And what a match….Absolute end to end stuff.

Crucially, though, they didn’t trail again either, meaning that East Bengal picked up their third point of the season tonight.

With just 11 goals in his 168-match long professional career before this match, Matti Steinmann clearly is no prolific goal-getter. Tonight, however, he was that and much more as he proved to be SC East Bengal’s saviour. The German midfielder dictated proceedings from central midfield in the first half with some outstanding work, before activating striker-instincts for a second-half brace.

Steinman is world class and its fact!!

The ex-Hamburg midfielder managed 85 touches, a passing accuracy of 84%, 7/9 duels won, 4 clearances, 3 tackles and interceptions, one key pass and a crucial brace. What a time to open your ISL account.

Chennaiyin FC started this match in eighth place, but they knew that a big win would take them all the way up to 4th in the table, so they were very much in the hunt for the playoff spots in the first half of the season. The Marina Machans might not have been at their best from the get-go, but they opened the scoring first and that’s all that really mattered. They could control the match after that, and with Deepak Tangri doing a very respectful job of covering their only weakness at right-back, Chennaiyin seemed to be unbreachable for a faltering East Bengal attack. However, in the second half, Csaba László’s side’s weakness was exposed, as they conceded twice from two corners within the space of nine minutes. The good news was the fact that Rahim Ali scored once in between that, so it was all to play for as we entered the final stages of the match. Despite a flurry of great chances, Chennaiyin FC couldn’t capitalise, so they only got a point from this fixture.

After that missing masterclass last week against FC Goa, Lallianzuala Chhangte has finally opened his ISL 7 account. If his finishing was half as good against Goa as it was tonight, he’d surely have scored a hat-trick then. Today, he only had one huge chance, which he worked hard for by sprinting for about 35 yards with the ball, and he dispatched it calmly. He did well on the opposite flank as well when he was deployed to shield Deepak Tangri at the back, meaning that he had a fairly good match overall.

The 23-year-old speedster converted his only shot on target, got 37 touches, completed 3 dribbles and completed a key pass. Finally, a goal-laden showing from the exciting forward.

Chennaiyin FC move up to 7th in the table in part thanks to Lallianzuala Chhangte’s first goal of the season, while Matti Steinmann’s brace which made him only the second-ever scorer for SC East Bengal in the ISL take them off the bottom and to 10th. SC East Bengal face Odisha FC in another crucial clash next Sunday, while Chennaiyin FC take on ATK Mohun Bagan in three days time. Stats courtesy Sofascore.com