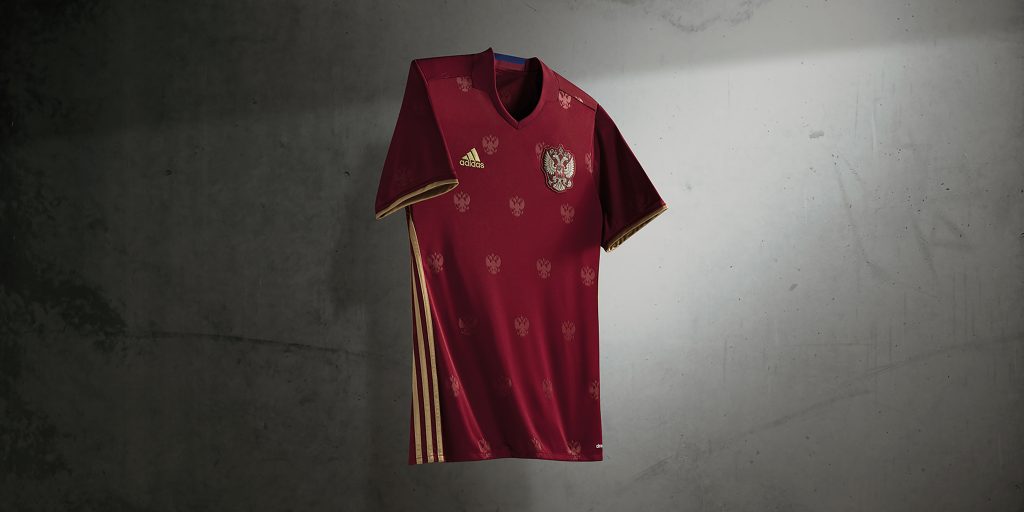 The iconic Adidas 3 stripes in golden colour are positioned on both the side and also on borders of the sleeves.

The new Russia Euro Kit is mainly dark red with the Russian football badge printed uniformly all over the shirt.

The shorts are shocks are designed in collegiate burgundy colour, designed in the same pattern as the Russian 2016 shirt.

The design of the kits is inspired by the idea of conflicting forces that exist inside everyone like elegance or valor, intuition or pragmatism, faithfulness to the past or willingness to go forward.

On the left of the jersey there is a Russian crest while the right side features adidas logo made in contrasting golden tone that sends back to Russia’s rich architectural legacy. The jersey also includes an eagle-shaped ornament.

The image of an eagle plays a significant role in the design of the kit. It is not only a symbol of Russia’s cultural and historical continuity, but also represents moral values as courage, togetherness and liberty.

The new uniform is made of light fabric which provides better ventilation without sacrificing movement and comfort.

The jersey weighs 90g that is 10% less than the one in the previous season. The Replica jerseys feature the climacool ventilation technology designed to keep the body cool and dry through holes, breathable materials, fabrics and special stitchings.