The transfer market has exploded in recent years. Newly-promoted clubs spend tens of millions, the top sides seem to cough up nine figures every summer, and someone breaks their transfer record every five minutes.

However, it isn’t all £100 million deals. We still see plenty of players come in on the cheap and prove themselves to be superstars.

Here is a look at the best bargains from the Premier League this season. 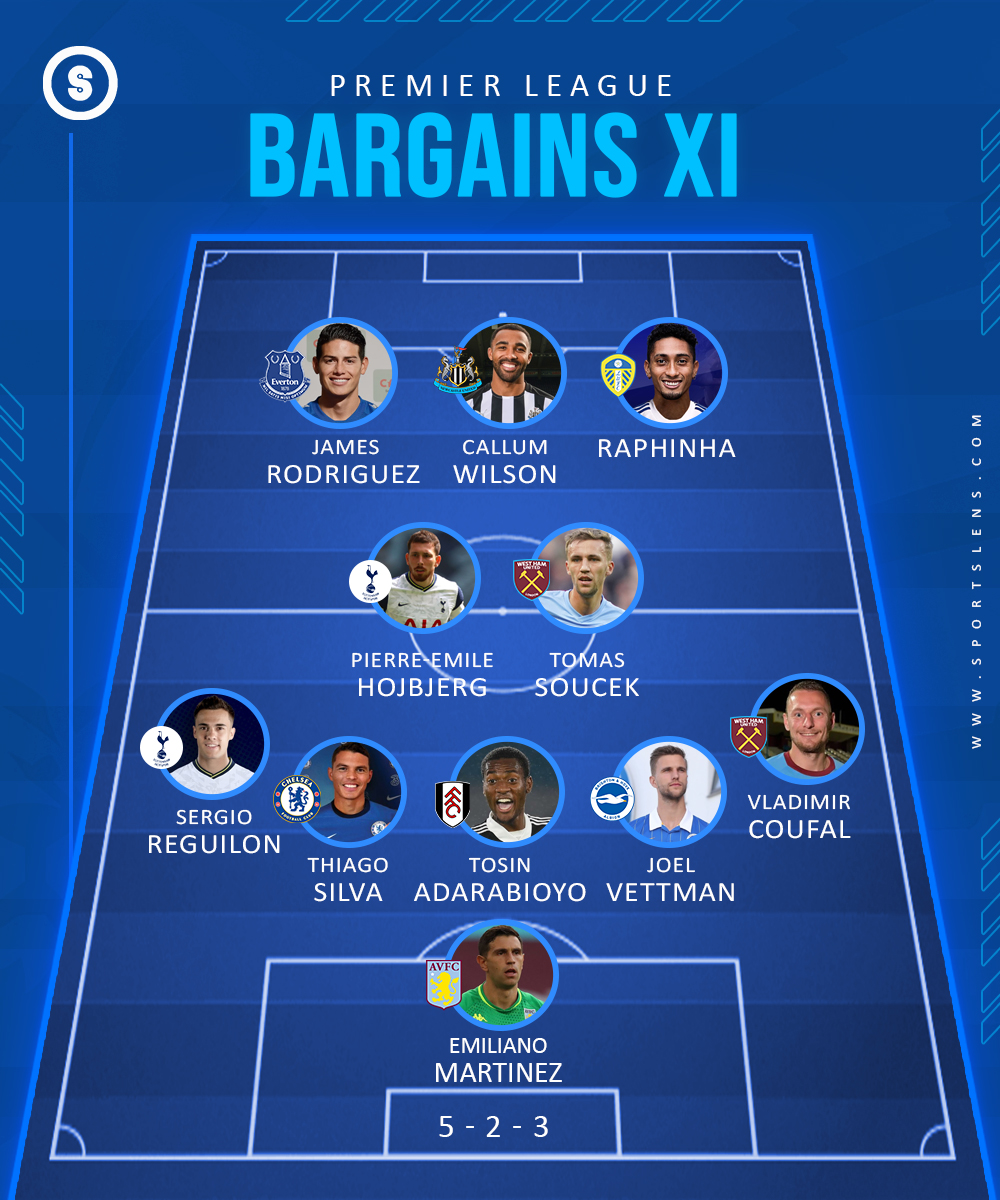 GK: Emiliano Martinez (£16m) – Off the back of a succession of impressive performances post-lockdown for Arsenal, Aston Villa decided to splash out on Emiliano Martinez. It’s safe to say the signing has worked out.

The Argentine has arguably been the best goalkeeper in the Premier League this season. His tally of 14 clean sheets is beaten only by Manchester City’s Ederson, and no goalkeeper in the top half has made more saves than him.

The Czech Republic international has enjoyed a fine debut season at West Ham, showcasing his talent both going forward and at the back for the Hammers.

CB: Thiago Silva (Free) – It should come as a surprise to absolutely no one that Thiago Silva has succeeded in the Premier League, given that he’s…y’know…Thiago Silva.

The 36-year-old has proven that he still has plenty left to offer at the top level with Chelsea. In his 17 league outings, he has kept ten clean sheets and scored twice.

CB: Tosin Adarabioyo (£2m) – Not much was expected of Fulham when they won promotion. In fact, Jamie Carragher was already writing them off after three games.

However, they’ve given themselves a fighting chance, and Tosin Adarabioyo is a big part of the reason why. Alongside loanee Joachim Andersen, the Englishman has been part of a Whites defence that has exceeded expectations, keeping nine clean sheets.

CB: Joel Veltman (£900k) – One that has perhaps gone under the radar, Joel Veltman has been an excellent signing for Brighton.

The Netherlands international has started 20 league games for the Seagulls, keeping seven clean sheets while scoring and assisting once.

LB: Sergio Reguilon (£25m) – Harry Kane and Heung-min Son may have stolen the spotlight at Tottenham Hotspur, but Reguilon has also played his part.

The Spaniard has proven himself to be one of the league’s best left-backs, assisting three times. With his pace and excellent crossing, it would not be a surprise to see Real Madrid exercise their buy-back clause on the 24-year-old.

The Dane is instrumental in Jose Mourinho’s system, constantly winning the ball back for his side. This has helped Spurs boast the third-best defensive record in the division.

CM: Tomas Soucek (£15m) – David Moyes decided to make Soucek’s loan move permanent last summer, and it has proven to be a shrewd piece of business.

The former Slavia Prague man is West Ham’s top goalscorer this season, bagging nine. This has helped them compete for European spots, as they currently sit in fifth place. Not bad for a defensive midfielder.

RW: Raphinha (£17m) – Patrick Bamford may get all the credit and all the FPL points at Elland Road, but Raphinha has also been a huge hit.

The Brazilian has recorded six goals and five assists so far in his debut season, including a marvellous free-kick against Southampton.

Following Bournemouth’s relegation, the Magpies brought the England international to St. James’ Park, and he has returned the favour with 10 goals and 5 assists in 21 appearances, directly contributing to over half of their league goals.

LW: James Rodriguez (Free) – Yes, we know he doesn’t play on the left, but there was no other way to fit him in.

Carlo Ancelotti reunited with the Colombian creator this summer, having previously worked with him at Real Madrid. He has been a hit at Goodison Park, scoring five and assisting four in 16 Premier League starts.