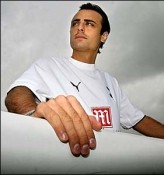 Before Tottenham Hotspur star Dimitar Berbatov began to sing Juande Ramos’ praises, the speculation surrounding whether he would stay or go swirled with rumor, one of which was that Manchester United were top of Berbatov’s January transfer window wish list. It’s no contest that this season Manchester United is performing much stronger than Tottenham, and because Berbatov is widely known as their marquee player, a rumor surrounding his eventual transfer is, to some degree, to be expected.

The perception generally is that clubs like Manchester United, Arsenal, Liverpool, and Chelsea are the big clubs in the EPL — and selective big club status necessitates rungs of smaller clubs. Because Berbatov’s form seems to be so strong (stronger than this season’s Spurs, in toto), the natural progression seemed to be well on its way: Berbatov was moving from the Spurs and up into the powerhouse of the North where he belongs. Whether this sets itself out of newsprint and into an actual contract has yet to be determined, but it is just the most recent example of what can look like a proverbial chicken or the egg question for football fans. Can a player ever be(come) bigger than their club? Or does the issue just boil down to dollars and cents?

The MLS instituted the designated player rule (DPR), which at its core creates a loophole in the MLS’s strangling salary caps while separating, to some degree, the wheat from the chaff. The internationally acclaimed players (compared to the standard MLS roster) who qualify for this exception are admittedly much bigger names with much bigger clubs behind them than the typical MLS player has.

Without judgment, no one would probably dispute that, at least from the way the LA Galaxy has marketed David Beckham, that Brand Beckham is bigger than (t)his club and league. When the announcement was made that Beckham was coming stateside, it was under the inaugural year for the DPR. No one was surprised that Beckham created a rule that allowed him to be paid nearly ten times more than some of the other MLS players because he is “such a huge player” compared to the MLS as a whole, an assumed starter for the Galaxy who was handed the captaincy, seemingly carte blanche, from Landon Donovan early on. During Beckham’s tenure at his past clubs, he never sparked such an exception to league rules, or garnered the captaincy so quickly. Real Madrid and Manchester United typically are filled with super star rosters, and Beckham is a member of that elite class of “luxury players,” which deems the standard MLS player more akin to utility than luxury.

David Villa has also been offered spots at more prestigious clubs but he continues to pledge his allegiance to Valencia despite numerous rumors that bigger clubs want to lure him away (the most recent being Real Madrid). Because apparently it isn’t the money that does it for Villa, even when the club is underperforming. The same might be said about Steven Gerrard. These players are a little surprising because they showcase loyalty, an intimacy that not every player can claim with their club (i.e. Didier Drogba).

Perhaps players that don’t feel the need to move from club to club believe they have reached the end of their professional climb up the league ladder. Maybe it’s getting paid more money to remain big in a small club than they would be paid at a larger one. Maybe their family plays a part. Or there could be some sort of inarticulate loyalty that continues to pull these players back, season after season (the club’s management, head office, etc.). Or it could be that the level of play at their club is the most competitive to them.

The opposite of these reasons could be why players choose to move around. Still, loyalty to a club, the kind that the fans have, is absent in most players. Fans may sort of assume that if a player gets too good for a smaller, stepping stone club, sooner or later they’ll be biding farewell to him. This may not make that player bigger than the club, but rather just disproportionate to the club’s (current) success.

Logically a player can never match the history that these clubs have, even though players are indispensable to the clubs; without them, it’s just an empty crest. It’s the players who create those landmark seasons that contribute to the history that fans recount. Current players Ryan Giggs and Paul Scholes exemplify this, collectively treading on approximately 31 years of Manchester’s 129-year existence, but you’d be hard pressed to find any Red Devil that would claim either player is bigger than the club, even if they have been consistent staples of some of the best Man U seasons in history. Because while fans typically support and bleed their clubs, the same isn’t usually true towards the players; in fact a player changing clubs could render him blacklisted for many fans, no matter how much they contributed, because its club first, player second. Indeed, the longer time a player spends at one club could render a move even more insulting — imagine if Gerrard moved to the blue side of Merseyside?

And then there is the West Ham debacle which all started in part because Tevez and Mascherano weren’t getting playing time, despite their talent. So they went elsewhere — but this wasn’t a lateral move: Mascherano and Tevez are fixture players for their bigger, post West Ham clubs. In fact Mascherano admitted that he felt compelled to leave, and while its certainly frustrating to be looked over by the manager, it takes guile to know that you are better than your manager’s decisions. Mascherano’s statements illustrates that player’s play for themselves, above all else, but it doesn’t hurt when other, bigger clubs are sniffing around. 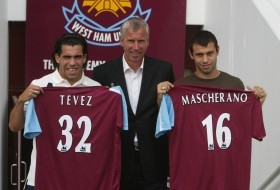 So it seems that some players, upon realizing their full (earning) potential, may begin to play like they are bigger than the club, possibly even believing that they are better than where they are. In forming that belief, the player props himself up in the shop window, so to speak, and turns his attentions away from his current club and towards the next.

But like the running theme of most stories commenting on soccer’s turn toward the dark side, soccer is a business — a global, multi million dollar business — and as the tide continues to turn away from history and tradition and “greater good” mentality, the emphasis on the individual player — with his lucrative collateral contracts, his sky high salary, and even a good degree of paparazzi fan fare (if you’re stylish and naughty enough) — will grow. This could be in part because fans no longer recognize their clubs, or at least the club their elders supported (new foreign owners, a lack of homegrown talent, and bloated salaries, to begin with), so perhaps it’s easier to find that sort of purity or ideal in a player, rather than a club.

This growing development could inevitably chip away at the importance of the club as an entity and more as a vehicle for the players. As the tiers between and within the leagues continue to grow, players will always be looking onward and upward. We wouldn’t respect them if they weren’t hungry for wins or success. But that mobility shouldn’t diminish their commitment to the club they play for at present, no matter where they end up or want to be. Players would be wise to keep in mind that while they may be one of the best of their generation, they are no match to the generations of fans that support the club for which they play.