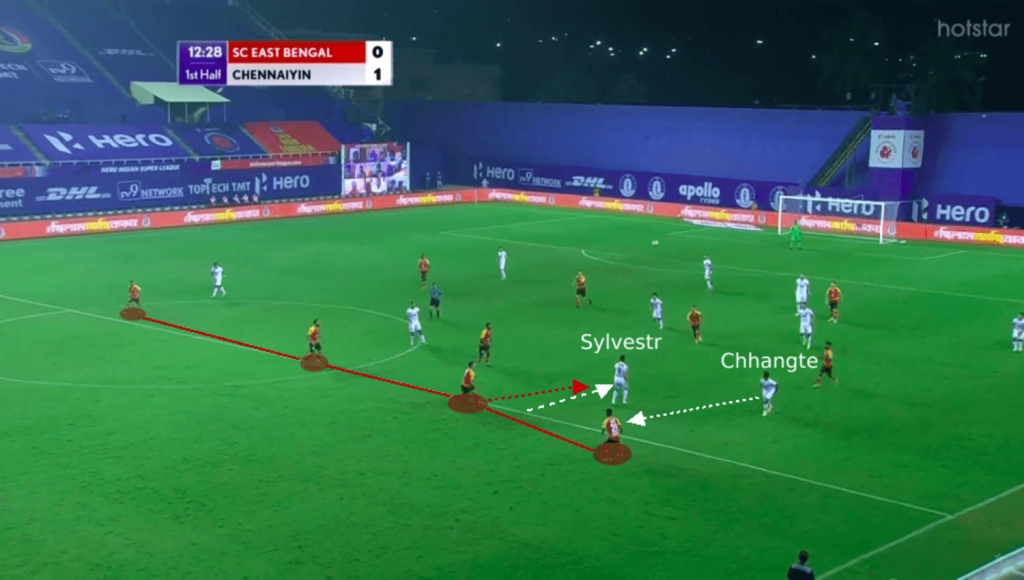 Following Chennaiyin FC’s hard-fought draw against ATK Mohun Bagan, Enes Sipović was doing post-match media duties. There, he was asked who the better striker was – Igor Angulo or Roy Krishna – since he had played against and contained both of them. He jokingly replied, “Jakub Sylvestr”, a response that many may not have taken seriously since the Slovakian forward has only netted the solitary goal this season, whereas Angulo and Krishna have eight and five respectively. However, Jakub Sylvestr is a different kind of forward to Igor Angulo and Roy Krishna, he is a playmaking striker. Usually, a striker is supposed to be the recipient of a playmaker’s work, as is the case with Angulo and Krishna, but Sylvestr is a rare exception to this. A good comparison to Sylvestr this season would be Harry Kane, minus the finishing. In this analysis, we will take a look at Jakub Sylvestr’s link-up play, and how it helps in creating brilliant goalscoring opportunities for his side.

Jakub Sylvestr’s movements follow the lines of the concept of the false-nine. The striker moves backwards and away from goal, dragging one or perhaps even two centre-backs with him and creating space in behind them for the wingers to run into. Here is a simplified animation depicting that. Let’s break that down step-by-step. This is a demo starting position – Sylvestr is in between the two centre backs, while the two wingers are in line with the full-backs. When Sylvestr comes short to receive a pass, he drags at least one centre-back with him. AS this defender follows the Slovakian striker, he breaks his line and creates space in behind for the winger to angle his run into. The next bit is theoretically simple, Sylvestr simply has to play a through ball into that space to meet the run of the winger. In practice, this is a bit difficult, as he has to make a reverse pass with a defender right on his back, and this is where quality makes the difference.

So far this season, Jakub Sylvestr has averaged 2.8 key passes per match. At the time of writing, he has created 7 chances, including 3 big chances, in his last two appearances. While the ex-Paderborn man has under-performed his xG by over 3, he has made up for it with his xA. Here are a few examples of his playmaking work: As Jakub Sylvestr moves away from the centre-back and a bit deep in his own half, he has a little bit of space to receive the ball. To prevent him from turning and running at the defence, the defender must close him down. In doing so, he breaks the defensive line, opening up space for the speedy Lallianzuala Chhangte to run into. With the full-back worried about his pace, he tries to keep his distance and stays a couple of steps behind him, but since Chhangte is running inside, his headstart is negated, and the quicker man (Chhangte) wins the footrace. Rafael Crivellaro’s presence in the side also helps, since he can assist Sylvestr in dragging defenders away from their position. This time, the action starts on the right wing, where Rahim Ali plays a simple pass to Crivellaro, who pulls a centre-back towards him. He then helps the ball on to Sylvestr. As Sylvestr receives the ball, he has the option to flick it on first-time, but he elects to hold on to it and take a step backwards since the defender has kept his distance after suffering the consequences of closing down earlier on, and the opposition have a respectable defensive line despite one centre-back being dragged away. By doing this, Sylvestr creates space and time for himself to turn and pick out a pass. From that little pocket of space, Sylvestr had time to pick out an opening in the opposition defence. Crucially, Rahim Ali angled his run to, first of all, drift inside, and more importantly, stay onside. Therefore. he can get in behind the stranded centre-back while dragging the full-back with him to stay onside. Finally, with his superior position and pace, Rahim can get to the ball first. It’s not necessarily always the wingers who benefit from Sylvestr’s creativity, Crivellaro can reap the rewards too. The Brazilian midfielder kicks things off by flicking the ball towards Sylvestr, who has to move back to receive it. Both centre-backs go with him to prevent him from turning and shooting. However, they vacate the centre of the box in the process, and with the full-backs holding position, Crivellaro is miles onside when Sylvestr reverses the ball back into his path via the space that the centre-backs left. The final instance was an example of some more intricate work by Crivellaro, while the first two were the more typical type of chance creation, which rely on pacy wingers alongside the striker’s ingenuity. Luckily, Chennaiyin FC have just that in Chhangte and Rahim, which is why this trick will continue to work time and again.

Jakub Sylvestr has received a lot of criticism for his finishing, or more precisely, lack thereof, but he continues to start for Chennaiyin FC. There is good reason for that, since his movement and creativity help cause all sorts of problems for opposition defenders, and this helps bring the other Chennaiyin attackers to the forefront of the action. Chennaiyin FC clearly have all the ingredients to assemble an unstoppable attack, but the only seasoning they are lacking to complete it is finishing, where not only Sylvestr but all the other attackers fail. If they can add that, the Marina Machans will become a real force to reckon with.