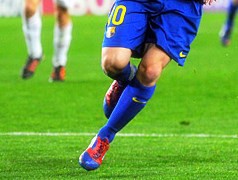 The football boot assumes a number of different monikers; a piece of protective footwear, an iconic symbol of the modern player, a performance aid, fashion accessory and weapon.

The number of developers, style, brands and makes of football boot makes it a competitive marketplace, however the latest craze in footballing footwear is the Adidas f50, which is worn by Lionel Messi. However, what makes the perfect football boot?

The first football boots were made of leather and could weigh as much as 1kg when wet, however the latest models are designed to be as light as possible to aid mobility. The f50 weighs a mere 165 grams, and when considering the perfect football boot the wearer would desire a piece of footwear that is light enough not to hold him back, but durable enough to provide support and protection.

The design of modern boots changes with the company of manufacture, however advances in technology mean that boots are made to help the competitor compete. A solid sole and durable studs are necessary in the perfect boot to allow the best grip on the surface and to aid balance whilst playing.

Similarly, the perfect boot needs to be comfortable, which means a spongy sockliner or internal support would be needed. These features are seemingly included with the f50, as Adidas look to provide players with the perfect boot.

Although the average amateur player will never get the chance to wear a customer-made football boot, the leading professionals now have that luxury. Laser Technology means that by taking a sculpt of the player’s foot, the boot can be designed to match the curves and shape of the athlete’s feet. This is undertaken to make the boot more comfortable and ultimately easier to wear.

Instead of merely helping to aid grip on the surface, the perfect football boot should be able to help players with technique and performance also.

The Adidas Predator was the first piece of football footwear that was developed to help the player control and curl the ball, and the later models have all included this feature too. The perfect boot would ideally help with trapping difficult passes, aid control whilst running with the ball and help the player to showcase skill.

The latest development in football boots is incorporated in the f50, as a miCoach computer chip is in-built in the footwear to measure speed, distance and calculate performance statistics. The f50 is supposedly the boot ‘with a brain’ and the perfect boot would certainly have this feature. An advance would be assessing the area of the pitch that the player spent the most time, and tracking fatigue through speed and regularity of sprints.

The final touch on the perfect football boot would certainly be how it looked, and with a raft of different design and colours available in the market the potential is there for a player to pick and choose. Ideally, the player would be able to customise the design on the outside of the boot, with a one-of-a-kind look to make the footwear unique to the wearer.