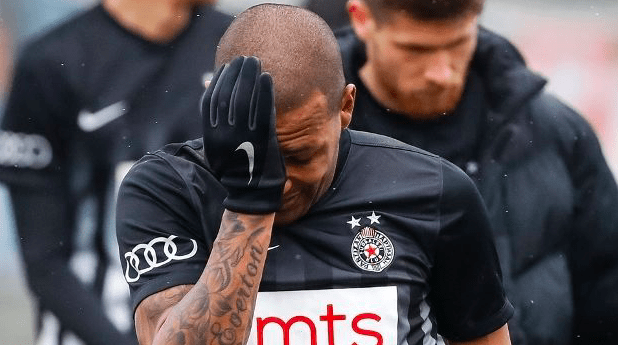 Partizan Belgrade midfielder Everton Luiz was subjected to racist abuse for the entirety of the match against Rad. The Brazilian played through 90 minutes of monkey chants and other abuse including a racist banner in the stands during his team’s Serbian league victory over Rad on Sunday. The referee interfered, and the banner was removed, but the chants continued through the game which Partizan won 1-0.

As a result, the Serbian Football Association suspended Rad’s stadium in Belgrade until further notice because of the fans’ behaviour.

The players of the two teams were also involved in a scuffle after the match, as Luiz made an offensive gesture to the Rad supporters after the game. Staff from both the sides broke the fight.

“I couldn’t hold back the tears because I was racially insulted from the stands for 90 minutes,” said 28-year-old Luiz later. He added, “What shocked me above all was the attitude of the other team. Instead of trying to defuse the situation, they supported that type of behaviour. I want to forget about it all as quickly as possible”.

Partizan naturally condemned the behaviour of the fans and in a statement, said, “We strongly condemn perpetrators of this insane act. Partizan feels obliged to apologise to all those insulted and hurt by racist chanting. We fully support one of the best players of our club, Everton, who has won the hearts of fans during his stay in Serbia in the last year.”

In a statement that puzzled many, Partizan coach Marko Nikolic said that Everton would also face disciplinary action the club for his reaction. It should be noted that Nikolic was sacked by Slovenian side Olimpija Ljubljana last April for racially abusing one of his own players. However, he did criticise the fans’ actions.

“Both sides in the incident should be punished. These things happen in football, but it is now up to the authorities to sanction the offenders,” he added after Sunday’s match.

Serbian fans have become infamous for racism against black players, with Rad supporters known for their nationalist ultra-right wing behaviour.

In October 2012, the British government wrote to UEFA to demand “tough sanctions” against Serbia. This was after England U-21 players were racially abused during a match.

For all the enthusiasm and patriotism shown, fans must understand that outbursts of nationalism and racism will only cause damage to football and the country’s reputation.