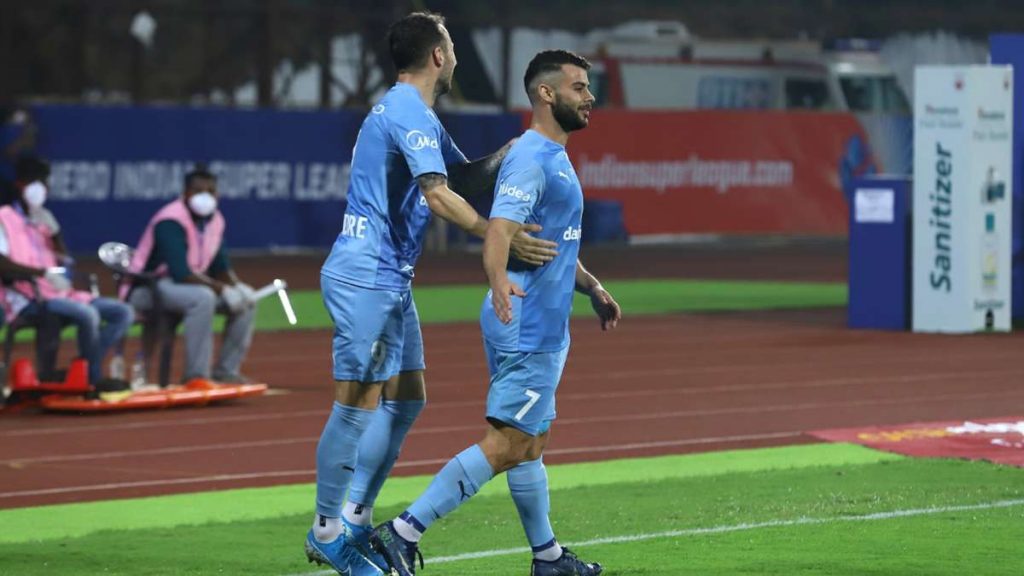 After a couple of days of rest for the turn of the year, the Indian Super League was back in action. Runners-up Mumbai City were coming up against 9th-placed Kerala Blasters in a very interesting fixture, with both sides having a chance to move up the table. Kibu Vicuña’s side were finally looking in shape after getting their first win of the season last time around, but this was their ultimate test. A crucial battle was set to ensue, and here’s what we made of it:

Less than two minutes in, Kerala Blasters initiated self-destruct as a poor backpass from Vicente Gómez saw Hugo Boumous pounce on the mistake and try to race through on goal, but a sliding Costa Nhamoinesu prevented him from doing so without taking the ball. Adam le Fondre stepped up and sent his shot down the middle, which went in through Albino Gomes’ legs. https://twitter.com/kanish2610/status/1345370913085165568 Mumbai City doubled their lead after another defensive lapse from Kerala Blasters in the 11th minute, as a free-kick from within the Mumbai City penalty area from Ahmed Jahouh found Hugo Boumous racing through on goal, and this time he was not fouled so he could slot it past the keeper and into the bottom corner.

I couldn't have scored a ridiculously easier goal in FIFA '20. This bunch is a joke. #KBFC #HeroISL #MCFCKBFC

The Islanders could have made it 3-0 in the 17th minute when Hugo Boumous played the ball out wide to Mandar Rao Dessai, who launched his effort over the crossbar. Kerala Blasters’ first big opening came just after the half-hour mark when Sahal Abdul Samad dispossessed Mourtada Fall just outside the penalty area, cut inside past two defenders and tried to beat Amrinder Singh from the centre of the box, but the keeper was equal to his effort. At the stroke of half-time, Bipin Singh got in behind the Kerala Blasters defence on the left and squared the ball to Hugo Boumous, who had a whole postcode to himself within the penalty area, but he opted to square the ball backwards for Adam le Fondre, whose chipped effort cleared the crossbar. A minute later, Bipin and Boumous exchanged positions and the Indian winger let fly, but he too missed high. https://twitter.com/sagar17291/status/1345382168130772994 Kerala Blasters finally put the ball in the net in the 56th minute when Jordan Murray bundled Costa Nhamoinesu’s header after a corner in past Amrinder Singh, but he was adjudged to have been offside. 15 minutes later, Mumbai City had another penalty as Sandeep Singh brought Hugo Boumous down in the box, but he clearly seemed to have taken the ball. The Frenchman might have thought it was deserved though, as he received a yellow card for simulation a few minutes prior to that when he went over Sandeep. However, the Blasters had the last laugh, as Albino Gomes saved Boumous’ penalty. https://twitter.com/sagar17291/status/1345392968887193613 Kerala Blasters came extremely close to pulling one back in the 76th minute when Vicente Gómez let a dipping half-volley fly from range, but it was tipped onto the crossbar and back in play by Amrinder Singh. A couple of minutes later, Jordan Murray slipped Sahal Abdul Samad in behind the defence on the left, but his effort in a one-on-one situation was saved by the keeper again. That preserved Mumbai City’s clean sheet, who came away with a 2-0 victory.

Mumbai City had 12 days off prior to this match, so they were quite fresh. The Islanders might also have been a bit rusty, though, but they were not tested at all in the opening stages as Kerala gifted two easy goals following some truly horrendous defending (more on that soon). After accepting the very late Christmas presents, Mumbai’s defence started returning some too as they were unusually loose in playing out from the back at times, but they went unpunished. Towards the end of the first half, Sergio Lobera’s side were just toying with their opponents. They passed their way through the enemy defence multiple times, but they failed to make their opportunities count and kept the match alive for the second half. Their defence was prone to a few lapses once again, but Amrinder Singh was just outstanding, and his efforts made sure that the Islanders won with a clean sheet.

This wasn’t Mumbai City’s best display of the season, but it certainly was a very easy victory, albeit with some slight bumps in the way.

After missing a couple of games due to an injury, Hugo Boumous is finally back in business. His dealings started within two minutes tonight, as he pounced on a defensive mistake from Kerala Blasters to win a penalty for his side. Nine minutes later, he went one better as he ran in between the centre-backs and finished in style to open his account for the season. The Frenchman continued to look good in the second period when he won another penalty, but he went out on a sour note because his effort was saved.

The 25-year-old attacking midfielder got 42 touches, completed 81% of his passes, won 7/10 duels and 2 penalties, made 3 key passes, guided both of his shots on target and drew 5 fouls. A solid display to mark his return.

Kibu Vicuña made a few changes to his lineup including selecting Costa Nhamoinesu over the impressive Abdul Nediyodath in the second half, but that clearly didn’t pay off. The Tuskers essentially self-destructed early on, as they let in two needless goals in just over 10 minutes. The first one went in after some loose passing at the back from Vicente Gómez and a mistimed challenge from Costa Nhamoinesu, but it was the second which must have been even more frustrating. A relatively flat long ball from Ahmed Jahouh split the entirety of the Kerala Blasters side as it reached Hugo Boumous in between the centre-backs, and then there was no stopping the Frenchman. Kerala looked by far the better side in the first quarter if the second period, but they simply failed to take their chances once again. Further, they didn’t get any luck from the referee’s decisions either, as Mumbai got a couple of penalties while their appeals were shut down. Lastly, Amrinder Singh pulled off some absolutely spectacular saves to thwart the Blasters in the rare occasions that they sent their shots on target.

Not our night, team. Kudos to all the players who played their heart out. Hope we'll iron out individual mistakes.

After that encouraging display last time out, Kerala Blasters looked very poor in all aspects once again tonight, and they clearly have a lot of work to do.

Kibu Vicuña said that he and his coaching staff were working on Sahal Abdul Samad to try and improve him further, and their efforts seemed to bear some fruit tonight.
Comment from discussion [account deleted]’s comment from discussion "[Match Thread] Mumbai City FC vs Kerala Blasters".
The 23-year-old forward finished the match with 2/6 shots on target, 3/5 dribbles completed, 2 key passes and 7/13 duels won in an encouraging yet fruitless performance. A step in the right direction, but he still has some work to do on his finishing.

Mumbai City FC go two points clear at the top of the table, while Kerala Blasters stay in 9th with the joint-worst defensive record of the league. Ahmed Jahouh’s assist for the second covered 74.6 m – the longest distance this season – while Albino Gomes faced his fourth and fifth penalties of the season, letting in his first and saving on the fourth occasion.

Yet another save by Amrinder..
Defense has been Poor..
Spectacular saves by Captain!!