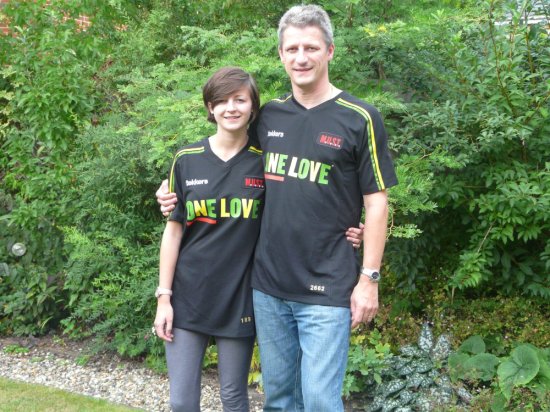 The history of Manchester United spans all the way back to 1892, when the club did not wear the now famous red kits, and was not called Manchester United. The club was named Newton Heath and the colours were green and gold, a canary gold which reminds one of today’s Norwich colours. We wrote about the old school Newton Heath Shirt, and about the history behind this kit back in January.

Now we’re back with a collection of the web’s best alternatives to the 10/11 Manchester United Shirt, which some supporters have decided to boycott due to the club’s debt and the negative feelings towards the Glazer family.

The official One Love shirt from M.U.S.T:

“This shirt has been made to exacting Premiership-quality standards. It is made from 100% polyester. The cut and feel of the shirt has been tailored to making it as comfortable as possible to wear. Whether that’s at the ground, in the park, on the beach or down the pub, we think you’ll love it. Each shirt will be allocated a unique limited edition number between 1 and 5,000. This number is allocated on a purely random basis and whichever number you get will be in the luck of the draw.”

The money from the proceeds will be donated to the British Heart Foundation. When you buy the shirt, you also have to make a donation to MUST, the Manchester United Supporters Trust, which they use for their own activities. You can get your One Love shirt here: One Love Shirt

Wish you could help but don’t want the One Love black shirt? We have some other alternatives found browsing the internet. Here are the best:

Green and gold till the club is sold shirt

This United supporter made some of his own Green&Gold shirts to show his dislike for the Glazer family. The first of the collection is the “Green & Gold Till The Club Is Sold One Love Shirt.” The designer will donate 50% of proceeds to M.U.S.T. in support of their movement. Click on the image or the link above to buy it.

This shirt made me laugh out loud a bit when seeing it. It sums up the feelings of most Manchester United supporters, showing the sentiments towards the American businessman. You can get the “Definition of Malcom Glazer Shirt” and the designer will donate 50% of proceeds to M.U.S.T. in support of their efforts.

As I said earlier, you can buy the classic Newton Heath shirt as well, but it’s quite pricy. If you still want to show your support and get back to the roots of the club, this “Newton Heath Football Club Shirt” could do the job. Like the other shirts, 50% of proceeds will be donated to M.U.S.T.

The Republik of Mancunia also have made some shirts to support the movement. The best one of the protest shirts is this “Love United Hate Glazer Shirt” which also makes a very bold statement. The shirt is less pricy but I’m not sure if the website donates any of the money earned to M.U.S.T.

This is the final shirt featured, and a pretty successful design from TshirtsUnited. This shirt has the Newton Heath history combined with the Love United Hate Glazer movement. The fist shows solidarity to the movement. Click the image above to order yours today. I’m not sure if any proceeds are donated to M.U.S.T. following the purchase of this shirt.

That wraps it up for unofficial Manchester United Shirts. Soccerlens does not endorse this movement, but as a journalistic source, we felt that informing our readers about the alternatives would be fair and just. What do you think of them compared to the official merchandise and what do you think about the movement?