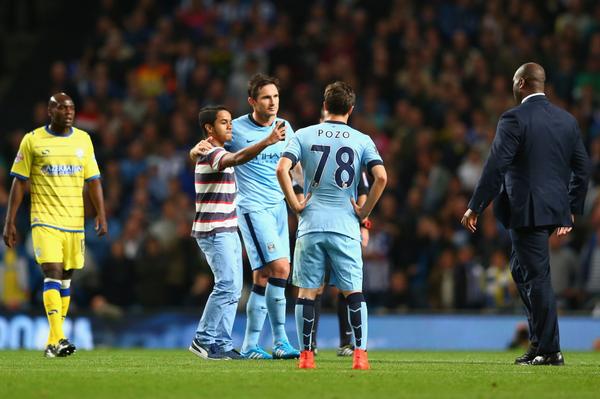 At halftime in the majority of Capital One cup matches on Wednesday night it seemed as if a number of shock results could be on the cards, but, by the time the final whistle had blown on the five matches taking place, only Hull had fallen by the wayside, knocked out by a late West Brom double.

Current holders Manchester City smashed seven past Sheffield Wednesday in the second half of their game at the Etihad without reply. Goals from Frank Lampard [2], Edin Dzeko [2], Jesus Navas, Yaya Toure and Juan Angel Pozo, making his debut, ensured that City would make the next round to face Newcastle. It was the first time in Wednesday’s history that they had even conceded seven goals on an actual Wednesday.

The Magpies themselves needed extra-time to overcome a resolute Crystal Palace side, saved only by the head Paul Dummett who ensured an under-fire Alan Pardew would live to fight at least one more day as they won 3-2.

Tottenham Hotspur made heavy going of their game against Nottingham Forest. Coming from behind against the Championship side, Ryan Mason scored a wondergoal on his Spurs debut to draw Tottenham level before Roberto Soldado scored a great poachers goal to finally give them the lead with just over five minutes remaining. Harry Kane added a bit of gloss to the scoreline in injury time as he ran on to Erik Lamela’s no-look pass.

Chelsea made hard work of their home-tie against Bolton, eventually running out 2-1 winners on the night after what could have been a frustrating evening for the Blues. Oscar’s winner in the second half came after Kurt Zouma had given his side the lead before Bolton pegged the London giants back when their captain, Matt Mills, nodded home a Liam Feeney freekick. In the end, Bolton were unable to find a second equaliser in what was an incredibly uneven match. Chelsea may have finished with only a one goal advantage, but on the evening they had 28 attempts on goal to Bolton’s three.

West Brom knocked out Hull thanks to a late-fire double from Gareth McAuley and Saido Berahino in the final three minutes of the match which saw the Baggies come from 2-1 down to win the tie and set up a fourth-round match away to Bournemouth.

Full draw for next round of Capital One Cup: