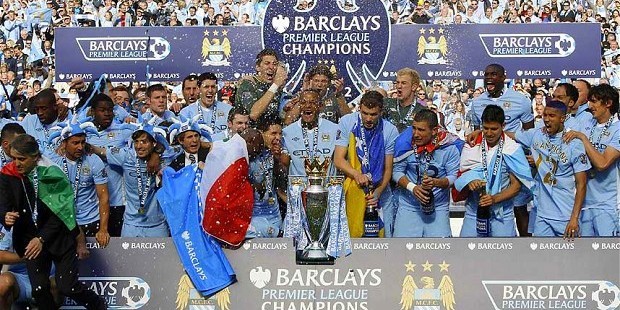 Arguably nothing will ever top the drama, excitement and raw emotion of the final day of last season. Tied on points, with only goal difference separating the two giants from Manchester, the 13th May, 2012 has been seared into the history books.

The Premier League pendulum swung this way and that, and for 90 minutes, the world stopped to watch a season finale that had more twists and turns than a Scalectric track. Manchester City came out on top, and many believed that this titanic victory would herald the beginning of an era of dominance from the ‘noisy neighbours’.

Almost a year on, it has not materialised. The current champions of England have fallen into transparency, where their almighty success last year was merely transient rather than transforming.

They have been exposed this season, exposed as a team that need not be feared, but taken to the sword. And while they are nestled in second spot, by no means a mediocre feat on the face of it, their position is as much down to the shortcomings of the following pack.

Arsenal, Chelsea and Tottenham have each had their damaging issues, and have been the architects of their own destruction over the course of the season.

Most crucially, City trail Manchester United by 12 points. Adding this to an utterly disastrous European campaign, where they were again dumped out at the group stage of the Champions League after finishing bottom of their group, failing even to acquire the Europa League safety net.

What then, are the reasons for City’s failure to build on their initial triumph?

Come the crunch transfer window at the close of last year, Mancini had the opportunity to build a lasting legacy at the club. He had had great success over the years, snapping up the likes of Yaya Toure, David Silva and Sergio Aguero for the club. But, he was not afforded the funds or the freedom to go out and recruit without restraint, as has been the City trademark over the past few seasons.

A seething Mancini was only permitted the signings of Jack Rodwell, Scott Sinclair, Matija Nastasic, Maicon and Javi Garcia.

In Rodwell and Sinclair, City acquired promising young English talent, but players who are not ready to make the jump to the biggest stage yet, if ever. Nastasic is a decent centre back and one for the future given his 19 years of age, but he is not yet a world beater; while Maicon is past his best, seen by his small price tag.

Only Javi Garcia can be seen as a starting 11 player, but even then he is still not wholly adapted to the Premier League yet.

While City were internally haggling over the quality of the players they were acquiring, their rivals were spending big on real world class talent.

City were caught up in the summer; last year, their team oozed quality that was just that little step ahead of the rest. But this season, parity has been achieved, and City are no longer the omnipresent force in the League.

The strange striker situation for Mancini has also been a factor. City’ s Player of the Year, Sergio Aguero, has not been anywhere near as devastating for the Sky Blues this year. His 23 goals last season propelled City towards that maiden title, but injuries have hampered the Argentine during the current campaign, and he has only hit the back of the net nine times in the league.

Edin Dzeko remains something of an enigma. His £27 million price tag is occasionally seen as money well spent, as he has a tendency to come up with the goods at the right moment. But the big Bosnian is still far from being a first class performer, and is arguably best used from the bench. 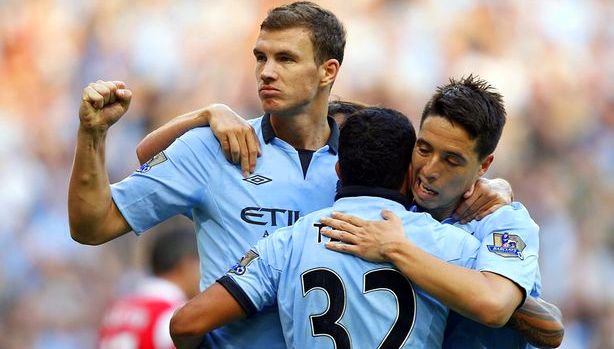 Talking of enigmas, Carlos Tevez is quite the conundrum. Capable of being as prolific as they come, his bizarre relationship with Mancini has certainly hampered his City career, and even though they have seemingly resolved their differences, you can’t help but feel that the effects of their bust up are still being felt by the bustling Argentine.

The departure of Mario Balotelli can only be a good thing for the club, and especially Mancini, as he was fast turning into what could have been the straw that broke the camel’s back. Well, rather the grand piano.

Form-wise, the confusion continues. The rock solid defence that were the foundations on which they built their title win upon last year have been uncharacteristically shaky.

Arguably the best goalkeeper in the league last year, Joe Hart, is a prime example. Watching Mancini lambast the England goalkeeper on several occasions has not been easy viewing. But his form has not been good enough, and his individual mistakes have cost City precious points this season.

City are a better side when Vincent Kompany is playing. The Belgian is among the best centre backs in the game, and his absence has been keenly felt this season due to niggling injuries.

Kompany has not played the last five league games for City, which included the crippling 3-1 defeat to newly promoted Southampton, a game where City went to pieces, with Joe Hart having a nightmare, and Barry scoring one of the strangest own goals of the campaign.

While all is not totally lost for City this year, as they remain in impressive form in the FA Cup, going into the semifinals against one of Chelsea or United next month, it has been a difficult season to stomach for City fans.

Gone are the days of slaughtering United 1-6 at Old Trafford, and the ecstasy of a first Premier League win. City have strayed from the spotlight this season in footballing terms, sliding occasionally into the public eye with their internal combustion, embarrassing European adventure, and ultimately fruitless attempts at defending their title.

Will Roberto Mancini be at the club next year? With mutterings of Ronald Koeman, Jose Mourinho and Manuel Pellegrini in the winds, the writing may already be on the wall for the Italian. But a strong finish in the league and an FA Cup victory may hold the axe for another year, but the demands on Mancini will not abate, neither will City’s fixation on lasting success.