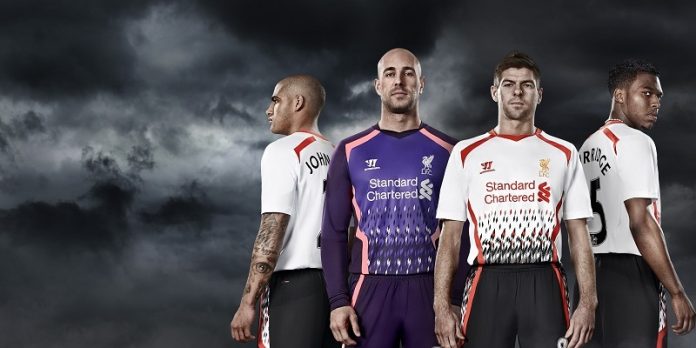 Warrior Football marked the return of the ‘diamond’ era by the launch of the new Liverpool 2013-14 away kit. The kit carries the spirit of the “breakthrough” patterns and graphics featured throughout the 1980s and early 1990s.

The core inspiration behind the kit design came from Liverpool’s 1981 League Cup-winning kit.

Just when it was established that we’ve left the horrors of the “stylish” kits of old, Warrior has channeled the spirits of those kits and brought them back to life in the Premier League.

Richard Wright, head of Warrior Football, said that they have worked closely with Liverpool throughout the design process. He added:

“We believe we have produced an away kit which stays true to the Club’s heritage but has a fresh look and feel.”

Manager, Brendan Rodgers, was also available to comment on Liverpool 2013-14 away kit. He said:

“A football strip fuses a team together; it is a Club’s uniform for players and fans.

“The fact that glimpses of the Club’s history appear in this kit is a really nice touch from Warrior.”

The kit is primarily white and black with red details and it carries a strong traditional look. The neckline has been reworked to give the shirt a modern edge, while a diamond print draws attention to its bottom half.

This diamond pattern was originally featured on the shirt as part of the 1989/91 away kits.

“I like that this strip is different, the pattern and colours are fresh. It looks and feels great on and I can’t wait to wear it next season.”

Fans are encouraged to weigh in with their feedback about the new Liverpool 2013-14 away kit on Twitter using the hashtag, #RiseUpLFC. The kit is available to buy from the official Liverpool online store.